At the start of the COVID-19 pandemic, researchers at USC Dornsife Center for Economic and Social Research (CESR) began tracking social, economic, and education outcomes among Americans through its nationally-representative online panel, the Understanding America Study (UAS)  with funding from the Bill and Melinda Gates Foundation and the National Science Foundation. Between April and October 2020 we administered five rounds of questions to approximately 1400 households with at least one child in Kindergarten-12th grade, asking about COVID-19’s effects on K-12 education. We collected five waves of data from these same parents between April and October 2020, and we will continue to administer questions over the coming months.

Below are the key findings we have found thus far.

At the Beginning of the Pandemic, We Found Large Disparities in Educational Experiences 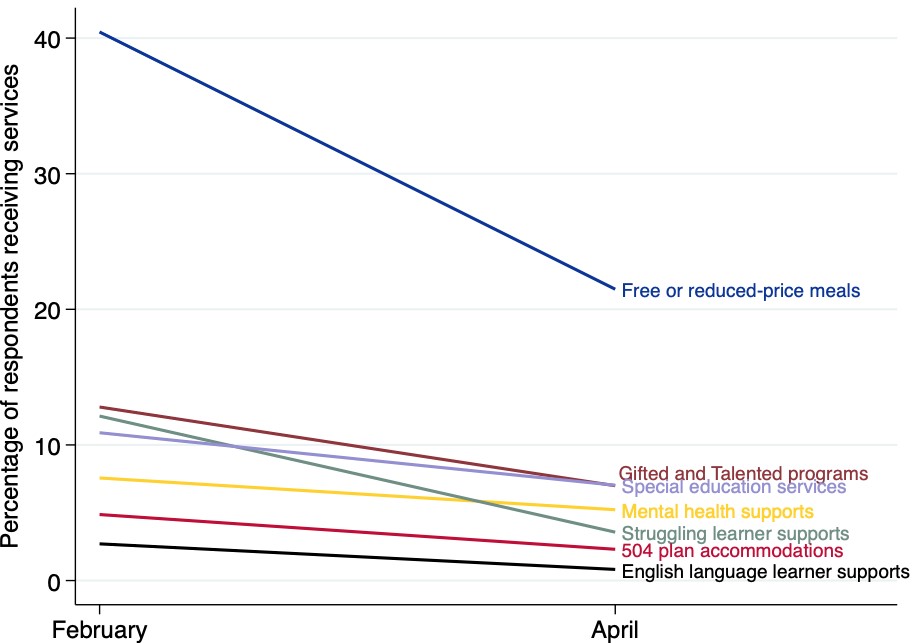 In the Summer, Parents Shared Their Preferences for the Fall

Over the summer, a proposed policy of remote-only learning for the 2020-21 school year enjoyed support from a minority of parents, 43% overall. UAS data was the first to shed light on the initially unexpected result—subsequently played out in districts nationwide—that parents of color and lower-income families would be less likely to send their children to school in person even when the option was available.

The richness of the UAS dataset, collecting broad information from these same households over time, demonstrated that families of color and low-income families were also the most frightened of hospitalization and death from COVID-19, perhaps partially explaining the finding that higher proportions of these families supported remote-only instruction in the fall. Parents also shared their desire for fall improvements, including additional time spent on synchronous or live instruction, and an increased amount or frequency of teacher feedback.

By October 2020, Parents of Fully in-Person Learners Reported Improvements. But There’s a Long Way to Go for Remote Learners

In October, nearly 70% of children were learning fully or partially remotely—with rates differing by many factors (e.g. by region of the country, race/ethnicity, household income, parental educational attainment, partisanship).

% of Households with Children Attending School Fully or Partially Remotely 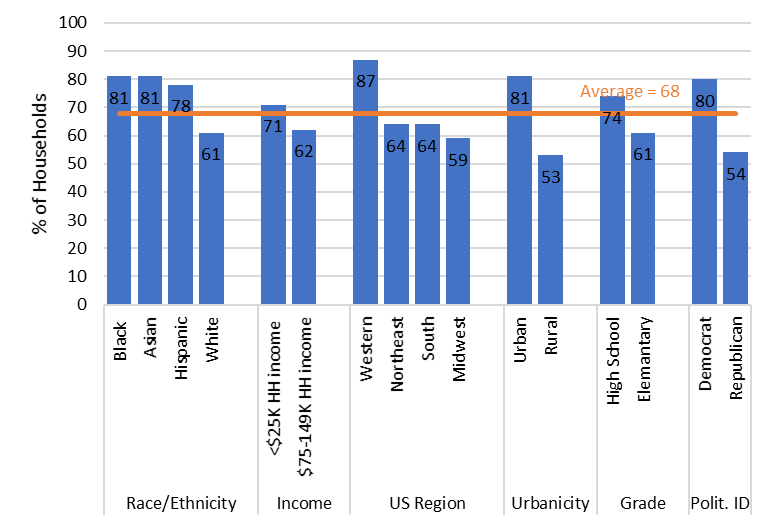 Nearly 40% of parents who reported their children needed tutoring said their schools did not provide it. Of parents with no more than a high school degree, half felt equipped to help their own children with homework. For example, 51% of parents with a high school degree or less felt comfortable helping their children with math homework. And while computer/device provision had improved over the spring, 3.5% of remote learners still did not have a device for learning—and nearly one in ten reported sharing a device (more so for children from low-income households). In addition, while just over one percent of families did not have internet access, 22% reported continuous internet interruptions, 40% for the lowest income.

We also found more than one in ten families with remote learners had formed “pods” where students learned together in-person with the help of a tutor or teacher. Somewhat unexpected given concerns shared broadly in the media during the summer that more privileged families’ use of pods would exacerbate already immense existing educational inequality, the proportion of families engaged in pods was 15% higher among families with household income less than $50K. We do not know if these pods are being used primarily for education or child care purposes, or the types of adults who are staffing these pods and whether that differs by demographic group.

In October we found schools were delivering more services than in April, but not at pre-COVID-19 levels. Meal service receipt, which dropped from 40% prior to COVID-19 closures to 20% of households in April, rebounded partially to 30% in October. For special education students (IEP or 504), about 11% of our sample were receiving services in February. This dropped to 7% in April and only rebounded to 8% in October.

We also found that while overall parents’ perceptions of their children’s school quality had improved by October over April, the trend was driven by parents with children back in school in-person . Parents of remote learners “graded” remote learning as less engaging, and of lower quality across all content areas. In addition, more families of remote-learners became concerned about children’s emotional health, while there was no change or a small decrease in the number of parents concerned among in-person or hybrid students. 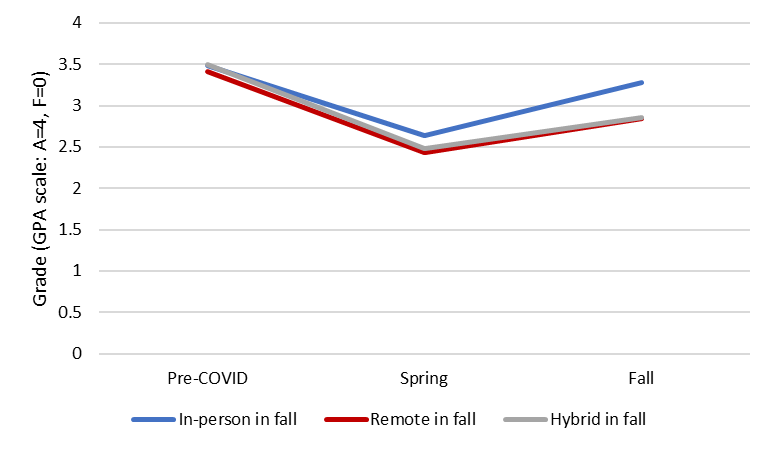 Data shows parents’ increasing support for canceling spring 2021 standardized tests over the course of the year. The proportion of parents supporting cancellation rose steadily from 43% in mid-April to 49% in late May to 59% in mid-July to 64% in mid-October, with the consistency of support across demographic subgroups—between 55% and 70% of parents across racial and ethnic, socioeconomic, political, and mode of school attendance groups support canceling standardized testing this coming spring.

These results have a number of policy implications. Parents of color and parents in lower-income households are more reluctant than other groups to send their children back to school in-person. At the same time, remote learners are suffering from lower-quality learning, less quantity and quality of interactions with teachers, and less social interaction with peers. Remote learner needs—and thus areas critically in need of funding and policy intervention—include tutoring, parent homework support, one computer per child, acceptable internet service, child care, and supports for child mental health. Provision of services including meals, services for special education students, English language learners, and children with social-emotional needs is not back to pre-COVID levels, which are more areas to bolster supports. Finally, given what the research and educator communities know and understand about the importance of testing to measure student learning and identify learning gaps and needs, parents’ growing support for canceling standardized tests suggests a need for parent education, communication, and messaging around the value and importance of those tests.