Reopening schools in the U.S. after summer vacation has never before been subject to so much uncertainty. Contrary to hopes at the end of the 2019-20 school year, U.S. COVID-19 cases and deaths did not recede over the summer, but rather increased – dramatically in some states and regions – tremendously complicating reopening prospects. As districts develop their plans for the school year, including logistical and instructional plans, understanding parents’ perspectives will be critical to meeting the needs of children and families. To explore these perspectives, we asked households across the U.S. about their experiences during the spring and summer, children’s educational activities over the timeframe, and preferences for the upcoming 2020-21 school year.

We fielded four surveys on these questions through the Understanding America Study (UAS), a nationally representative survey administered to the same households over time by the USC Dornsife Center for Economic and Social Research. The UAS includes approximately 1,400 households with at least one preK-12th grade child as of the 2019-20 school year. With funding from the Bill and Melinda Gates Foundation and the National Science Foundation Discovery Research preK-12 program, four survey waves were collected between April 15 and July 21, 2020 from the same households, who answered questions about the impact of the COVID-19 epidemic on their children’s experiences over this period.

What Are Parents’ Concerns About the Upcoming School Year?

Over the summer, half of families expressed being concerned or very concerned about the quality of the education their schools will deliver under full or partial distance learning.

Consistently since April, approximately one-quarter of parents feel their child will be underprepared (answered as “not at all prepared” or a “little bit prepared,” versus “prepared” or “very prepared”) for school in the fall. In July, we asked about preparedness in specific subject areas. One-quarter to one-third of households think their child will be underprepared in each subject area we asked about, including math, language arts, science and social studies. These perceptions of lack of preparedness are more prevalent for non-white and lower-income households.

Twenty-two percent of households with children in grades K-12 reported that they will be changing schools for the 2020-21 school year, including for typical reasons like grade progression (moving from elementary to middle school). But, of these, 28% report that this school change is “somewhat” or “very much” influenced by experiences during COVID-19.

How Do Parents Think Schools Should Reopen in Fall 2020?

During late June and early July, three-quarters of responding parents support or strongly support schools offering both remote and in-person instruction. Moreover, 43% think schools should stay physically closed for the entire 2020-21 school year. But there are large differences in this belief by income – more than half of lower-income families think schools should stay closed compared to approximately 36% of higher-income families and 27% of families in the highest income bracket. 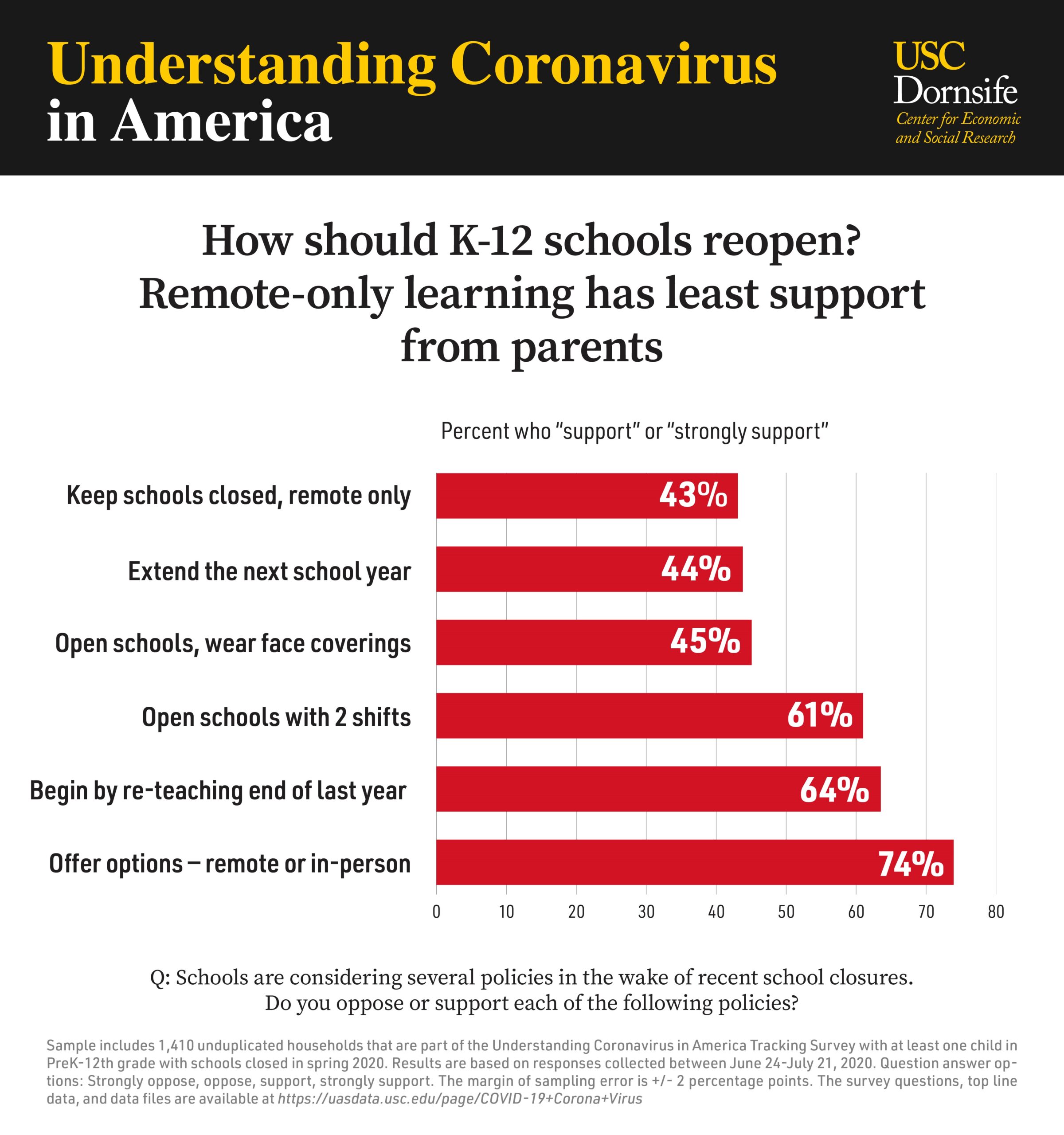 At first pass, this result may seem counterintuitive. Lower-income families are more likely to be employed outside of the home, which would further complicate homeschooling relative to working from home as is more typical among higher-income households. However, in the context of differential beliefs about a COVID-19-infected person’s outcomes, the greater support for physical school closure among lower-income individuals makes sense. UAS data shows those in our parent sample with household incomes below $50,000 believe their likelihood of hospitalization if infected with COVID-19 is 25%, compared to 12% for those with household incomes above $150,000. Even more telling, those with household incomes below $50,000 believe, if infected, they have a 22% chance of death, compared to a 6% chance of death reported by parents in households with incomes above $150,000. These differential perceptions align with data indicating that lower-income and racial minority individuals and households are disproportionately at-risk of death if infected by COVID-19.

How Do Parents Want to See Remote Instruction Change in Fall 2020 From What It Was in Spring 2020 if Learning Remains Remote?

More than half of parents want increases in time spent on live instruction and increased feedback from teachers, though there are meaningful differences in instructional expectations by parents’ level of educational attainment. A higher proportion of middle-income households report they were offered a computer at any time since the schools’ closures compared to the lowest income households. 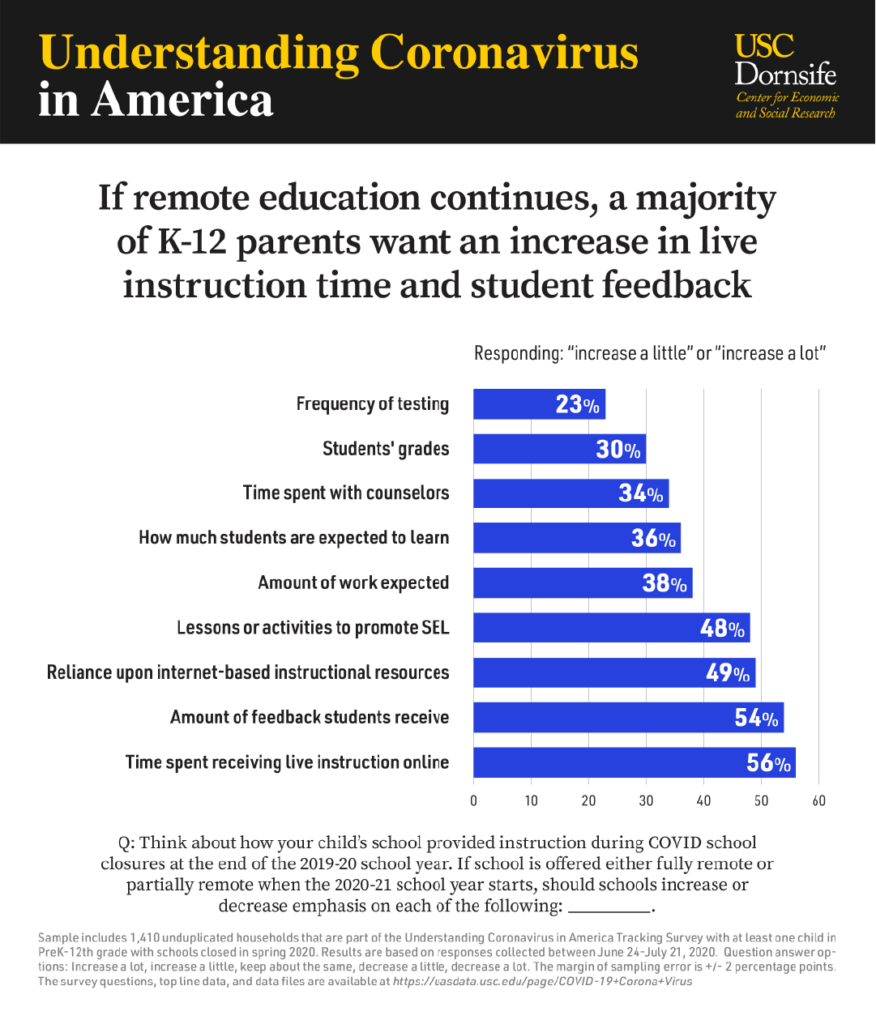 During the summer, more children engaged in non-academic activities than academic ones[1]. Among academic activities, reading and writing were most common (70-80% reported their children engaging in these activities on a typical day), and STEM activities were much less common (between 20% and 37% depending on the activity). Higher proportions of non-white and low-income households reported all types of academic activities compared to white and high-income households. More than two-thirds (67%) reported that children were interacting with peers in person—more so for white (71%) than non-white (59% – 64% by subgroup). Very few parents reported children attending summer camp, either virtually or in person (less than 10% for each).

These results have several policy implications. First and foremost, since distance learning takes place via internet-connected technology, states and the federal government need to work quickly to ensure all students have access to these critical tools. Also of high importance, districts and schools need to increase live instruction over what students received in the spring and provide more feedback on student work.  Learning in STEM subjects including math and science may be particularly negatively affected, suggesting the need for students to access high-quality online STEM curriculum and instruction programs.

About the survey: The sample of over 1,400 U.S. residents with a preschool through 12th grade child participated in the survey across four waves administered from April 15-July 21. The margin of sampling error is +/-2 percentage points on questions administered to the full preK-12 household sample. Survey respondents are members of USC Dornsife’s Center for Economic and Social Research’s Understanding America Study (UAS) probability-based internet panel. The survey was funded in part by USC, the Bill and Melinda Gates Foundation, and the National Science Foundation Discovery Research preK-12 program. Information about the survey and the UAS panel, including methodology, question wording and results is available here: toplines and crosstabs

[1] 10% of responding parents’ children (n=153) were still in school at the time they responded to the last wave of the survey. We removed these responses from the analyses of how children were spending their summer time so that we could compare the prevalence of academic versus non-academic activities within The sample size for those still in school was too small to reliably explore time use within that group.

Anna Saavedra, EdD, is a research scientist at the University of Southern California Dornsife Center for Economic and Social Research; she studies K-12 education policy with a focus in curriculum and instruction.

Amie Rapaport, PhD, is the director of research at Gibson Consulting Group in Austin, Texas; she researches the implementation and impact of education interventions and supports school districts across the country on local research projects and problems of practice.

Dan Silver is a PhD candidate at the University of Southern California Rossier School of Education studying education policy.

Morgan Polikoff, PhD, is an associate professor of education at the University of Southern California Rossier School of Education; he studies education policy and co-directs the Center on Education Policy, Equity and Governance.

Shira Korn is a PhD candidate at the University of Southern California Rossier School of Education; her work focuses on K-12 education policy, particularly around issues of school accountability and parent choice.

Marshall Garland is a senior research scientist at Gibson Consulting Group in Austin, Texas; he specializes in education research and program evaluation, with a focus on students’ transitions into college and the workforce.