As high and rising prescription drug prices continue to be a top issue for consumers and policymakers, drug manufactures and middlemen in the distribution system. such as pharmacy benefit managers (PBMs), have come under scrutiny. But because the system is so opaque, the forces driving price increases have remained poorly understood. 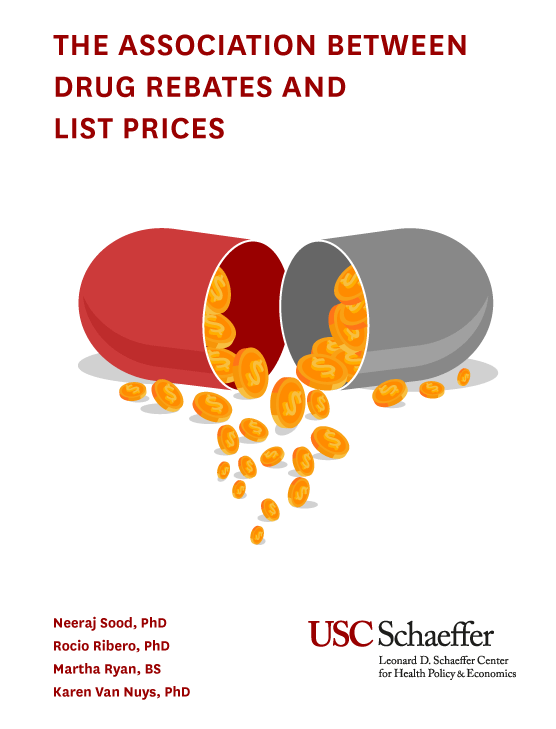 A new Schaeffer Center white paper sheds light on an important aspect of the issue: it shows that rising rebates demanded by PBMs are associated with rising list prices for prescription drugs. “There is a near one-to-one relationship between rising rebates and rising list prices for branded prescription drugs,” said Neeraj Sood, who coauthored the study and is a senior fellow at the USC Schaeffer Center for Health Policy & Economics and professor at the USC Price School for Public Policy.

List prices are set by drug manufacturers and don’t reflect rebates paid and discounts given, which reduce the net price the manufacturer ultimately receives for the sale of its drugs. Rebates are money refunded to the PBM from the manufacturer, often in exchange for giving their drug preferred formulary placement. Understanding the relationships between list prices and rebates is important because it informs the degree to which policymaker efforts to lower drug prices should target manufacturers or other players in the system, specifically PBMs.

“High list prices impact a lot of patients directly, including uninsured as well as insured patients whose copays and deductibles are based on the drugs’ list price. They also impact overall healthcare spending,” said co-author Karen Van Nuys, executive director of the Value of Life Sciences Innovation project at Schaeffer Center and assistant professor at the Price School. She went on to add, “Recently PBMs have made the argument that manufacturers set list prices unilaterally and therefore they are solely responsible for increasing list prices. This research suggests there is a much more dynamic relationship at play.”

The researchers find that, on average, a $1 increase in rebates is associated with a $1.17 increase in list prices. The positive relationship between list price and rebate changes also held in subsample analyses that considered brand drugs with and without generic substitutes separately.

It was particularly strong for brand drugs without generic competitors.

According to the researchers, this provides further evidence that demands for rebates from PBMs are at least partly responsible for rising list prices. Because the PBM market is highly concentrated, with three companies serving approximately 75 percent of the market, it is unclear whether consumers are benefiting from higher rebates or if rebates are simply driving higher profits for PBMs.

Given these findings, Sood and his colleagues argue that reducing or eliminating rebates could result in lower list prices. This would decrease out-of-pocket costs for both uninsured patients and those who are insured but have deductibles or coinsurance based on list prices.

But, what effect this would have on premiums is complicated to predict. It would depend on how reducing rebates changes formulary decisions, whether or not PBMs pass rebates on to insurers currently, and whether or not insurers share passed-through rebates with consumers.

“These findings shed light on practices that are potentially artificially inflating list prices, which has consequences for patients and the whole of the healthcare system,” said Sood. “To really understand drug pricing dynamics, we need greater transparency throughout the pharmaceutical distribution system.”

The pharmaceutical distribution system is complex, involving multiple players and relationships. For this study, it is important to understand the dynamic between insurers, pharmacy benefit managers, and manufacturers.

Sood and his colleagues authored a white paper on the pharmaceutical distribution system and how profits flowed in 2017.