Rebates are discounts that lower the price of a product and are used across industries to boost sales. For example, when someone buys a car there are often rebates which reduce the price the consumer pays to well below the sticker price.

Rebates play an important role in the prescription drug market too. But in contrast to car shopping, Medicare patients don’t necessarily benefit from drug rebates when they are at the pharmacy counter. This is because their share of the cost is often based on the list (or pre-rebate) price of drugs. Instead, rebates go to health plans and pharmacy benefit managers. While this helps to reduce premiums, it means that some patients pay more when they fill their prescriptions. 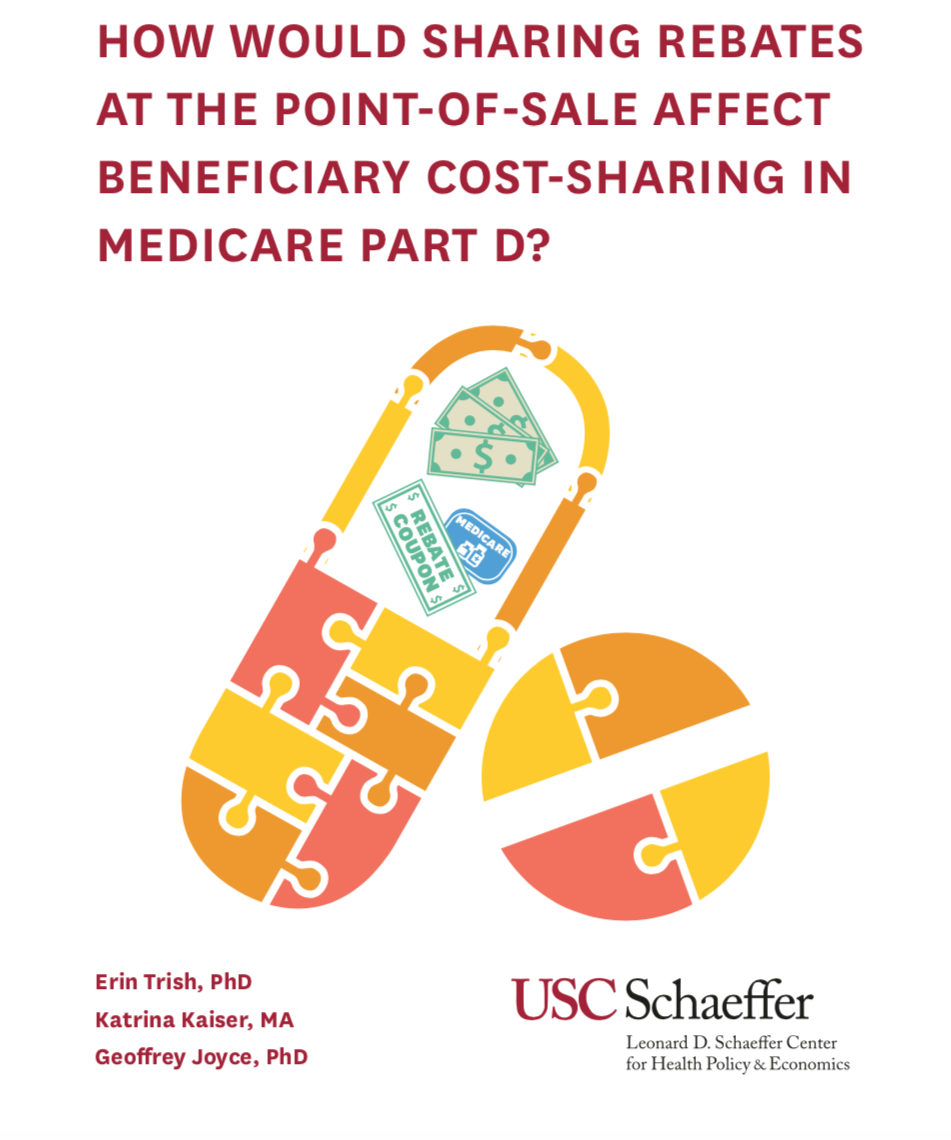 A new Schaeffer Center white paper finds almost half of individuals with Medicare Part D coverage would see a reduction in out-of-pocket spending if patient cost-sharing were based on the price negotiated after the rebate (or net price), rather than the pre-rebate list price.

“Drug rebates have become an increasingly significant component of the Part D program, but our analysis shows beneficiaries are not necessarily benefiting in terms of out-of-pocket spending,” explained Schaeffer Center Associate Director Erin Trish, who co-authored the analysis.

“Although rebates help keep Part D premiums low, they do so in a way that disadvantages those who rely on high cost, high rebate drugs,” says co-author Geoffrey Joyce, Schaeffer Center director of health policy. Joyce and Trish are also faculty at the USC School of Pharmacy.

The study team – which included Trish, Joyce, and Schaeffer Center Research Programmer Katrina Kaiser –used 2016 Medicare Part D claims data to conduct the analysis. To model the policy change basing cost-sharing on net price, rather than list price, they discounted the list price of each claim by the estimated rebate and calculated what the patient’s cost-sharing would have been under this alternative scenario.

Yet the investigators caution that the range of savings can vary widely according to the drugs purchased. Basing cost-sharing on net price would make a significant difference for patients needing high-cost drugs with high rebates, but little difference for patients who take high-cost drugs with low or no rebates. For example, users of the hepatitis C treatment Harvoni would see their out-of-pocket costs for that and other drugs fall by an average of $1,303 a year. However, average spending among users of Ibrance — a drug used for breast cancer — would fall by only $24. This distribution of the policy impact reflects the variation in rebates across different drugs and therapeutic classes.

The study also suggests another important advantage to this net-price shift: it would reduce the number of consumers reaching Part D’s catastrophic coverage phase, during which the federal government pays most of the drug costs. The authors found that 36 percent fewer beneficiaries would reach catastrophic coverage, which would result in a 19 percent reduction in federal reinsurance spending.

The findings show overall savings could be substantial for many patients. The authors note that one concern blocking this reform is that it would likely result in higher premiums. However, the authors also note that that is because some beneficiaries are paying more out-of-pocket, which helps to reduce premiums for everyone. The authors urge federal policymakers to consider implementing this change to how Medicare Part D cost sharing is calculated. Either alone or in conjunction with other reforms, basing rebate amounts on net prices rather than list prices would limit beneficiaries’ out-of-pocket spending and make cost-sharing more reflective of the actual cost of the drug.

Support for this study was provided by the USC Schaeffer Center for Health Policy & Economics.