Editor’s note: An interactive map and table of the transparency laws identified and analyzed by the authors is available here.

Prescription drugs accounted for 19 percent of all Medicare spending in 2016,[1] and steeply increasing drug prices have provoked public outcry for government intervention. According to a recent poll of American patients, 24 percent have difficulty affording their prescriptions,[2] and voters have ranked healthcare as their number one priority for the 2020 presidential election.[3] However, because few people outside the pharmaceutical distribution system know which entities in the system are making excess profits, policymakers struggle to draft effective legislation to lower drug costs for consumers and public payers.[4,5]

Public attention tends to focus on drugs’ list prices (or wholesale acquisition cost [WAC]), likely because these data are the most widely available to those outside the industry.[6,7] WAC is a list price upon which manufacturers base the price they charge to wholesalers, but due to rebates and other concessions, it does not represent the amount that manufacturers ultimately receive for drugs. The complexity of the drug distribution system, involving numerous middlemen and confidential negotiations for myriad rebates, fees and discounts, ensures that list prices have little to do with the prices eventually paid by consumers and payers (Figure 1).

The drug’s manufacturer net price is a more useful indicator of the total price paid after all discounts and rebates, and represents the amount the manufacturer ultimately receives. Transaction prices, i.e. those that distribution system entities negotiate with one another, are also useful and important for calculating excess profits – the returns earned above and beyond the risk-adjusted rewards that would be earned in a competitive market.  Estimates of manufacturer net price per unit for 49 top-selling (those exceeding $500 million in domestic sales and 100,000 pharmacy claims) brand-name prescription drugs in the US increased an average of 9 percent from the three to five years preceding 2017.[8] But the difference between what manufacturers receive for each drug and the profits distributed among parties that make up the pharmaceutical distribution system, including wholesalers, pharmacy benefit managers (PBMs), insurers, and pharmacies, is shrouded in mystery.  As a result, some legislatures are proposing policies designed to increase transparency in the drug distribution system.

Although federal agencies such as the Food and Drug Administration and the Centers for Medicare & Medicaid Services regulate important aspects of the pharmaceutical industry, individual state laws control many aspects of the pharmaceutical distribution system. The process of legislation (enacting new laws) differs from that of regulation (the implementation of enacted laws). States are increasingly introducing drug pricing bills (Figure 2), many of which are focused on price transparency. These are designed with the intent to provide regulators or the public with more information about how entities in the drug distribution system set prices, particularly when prices increase suddenly or steeply.[9] Presumably, having such information will help regulators determine when and how to intervene when distribution system entities make price increases that result in excess profits.[10] Transparency laws may also preempt some unwarranted price increases as distribution system entities realize they will have to report prices and thereby invite scrutiny.[11]

To understand whether this legislative activity is likely to provide the information needed to understand whether drug distribution players are making excess profits, we reviewed recent state drug price transparency laws. This analysis was published in a peer-reviewed journal: JAMA Network Open.[12] Below, we describe the methods, key results, and implications of this analysis.

To identify transparency bills, we searched the National Conference of State Legislatures (NCSL) prescription drug database, which tracks state drug laws from 2015 onward.[13] We initially captured all enacted laws related to drug pricing, and later restricted the sample to only those that included a component of information transparency in the legislation summary. We also used the National Academy for State Health Policy[14] and the American Health Lawyers Association[15] state legislative surveys to identify legislation not included in the NCSL database. These surveys accounted for about 35 percent of our sample.

We first categorized laws according to the entity from which the law required information (manufacturers, wholesalers, PBMs, pharmacies, insurers, or a combination). We then analyzed each law’s potential to reveal information about distribution system participants’ rebates, concessions, manufacturer net prices, or profits.  We chose these criteria because knowing real transaction prices is a vital prerequisite to understanding where and how to focus policy solutions. Accordingly, we coded laws as “informative” if they would result in new disclosure of this information. Laws requiring reporting of information that was already publicly available (such as wholesale acquisition costs), or that did not help reveal the drug’s multiple transaction prices (such as justifications for a price increase) were labeled “uninformative,” because they would not reveal true transaction prices that were not previously available elsewhere.[5,12] 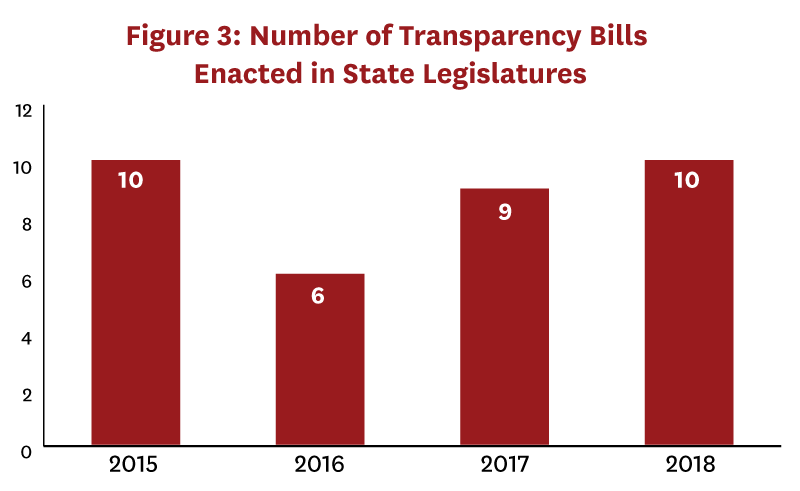 We identified 166 drug pricing bills enacted during 2015-18, of which 35 bills in 22 states included a transparency component (Figure 3). Only seven of these bills, passed in six states, were determined to be “informative.” (Table 1).  Two states required that transaction prices be reported—in Vermont insurers were required to report specific drug costs net of rebates, and in Maine manufacturers were required to report “true net typical prices charged to the PBM.”[16] Only Oregon and Nevada required that profits be reported—in both states by manufacturers. Laws in Connecticut, Louisiana, and Nevada required PBMs to report aggregate rebates, but no state required reporting rebates at the drug level. “Uninformative” transparency laws commonly required distribution system participants to disclose their methodology for setting prices or formulary design, provide advance notice of list price increases, or register with a government regulatory body.

Laws vary on several dimensions, including the timing of the disclosure (before or after a price increase), the type of information (e.g. price amounts, justification for price increase, pricing methodology, etc.), and what thresholds trigger disclosure. In many cases, information submitted to the state is kept confidential, and in some states the receiving agency must generate a public report summarizing the information submitted by manufacturers. In other cases, the legislation contains no apparatus for further state action or enforcement. These details will influence whether the public will have access to data or not, and the extent to which regulations have teeth. The number of drugs required to be reported, and from which entities the transparency is required are the most important factors because they determine the amount of information released. 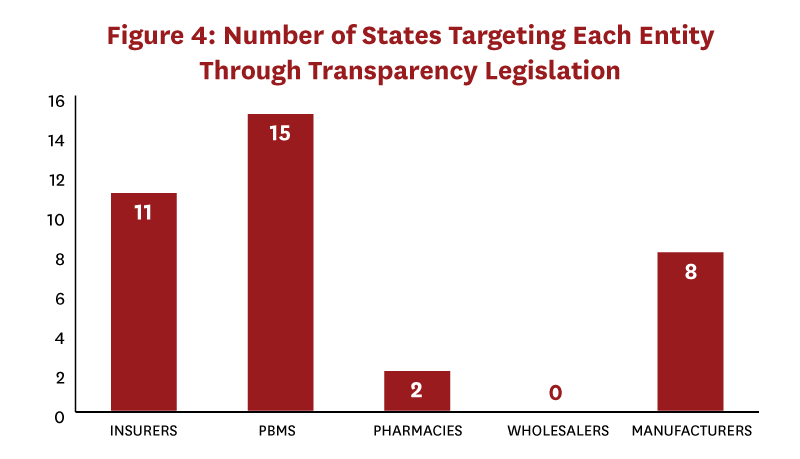 Clarifying who along the distribution system is responsible for and benefiting from increased prices can inform efforts to address drug pricing.[17] Excess profits in the distribution system harm patients with and without insurance. Those without insurance or who are insured but in the deductible portion of the benefit have been shown to reduce utilization of medications in response to higher out-of-pocket costs,[18,19] resulting in worse outcomes.[20] Even if insured patients pay low out-of-pocket costs for their medications, rising drug costs might result in higher premiums over time. Based on our review, the state legislation currently in place to provide greater transparency is insufficient to properly guide any targeted policy action necessary to identify and eliminate excess profits in the distribution system.

The conclusion that states are passing mostly uninformative transparency laws raises the question of why they engage in such efforts in the first place. One explanation is that although appealing in principle, implementing transparency meaningfully is much harder in practice.  Legislators may win voter support if they demonstrate their commitment to the cause of lower drug prices by sponsoring transparency legislation, even if that legislation won’t help lower drug prices. But state legislators also face significant challenges in designing and implementing effective laws, among them ensuring consistency with existing federal law: Nevada’s SB 539 faced a lawsuit (eventually dropped once the state allowed companies to protect specific information from public disclosure[21]) led by the pharmaceutical industry on the grounds that the law violates the dormant commerce clause.[22] Court challenges led by distribution system entity interest groups pose an important hurdle that state legislation must overcome.

Even effective transparency laws on their own do little to affect drug prices without supplementary strategies to act on information resulting from transparency disclosures. Transparency is not the same thing as action. Additional strategies, like consumer incentives and third-party auditing,[23] are necessary for transparency reporting to result in lower drug prices.[10] For example, Vermont’s price transparency reports resulting from Act 165 have identified thousands of drugs that exceed the thresholds provided in its price transparency bill.[24] Yet only ten were selected by a state board for investigation of excessive price increases. If the state lacks the capacity to act upon the information provided through these measures, they will have limited impact on drug prices.

The most important information for policymakers to include in useful drug price legislation is reporting all transaction price information, including the discounts and rebates received, from each distribution system chain participant.[12]  This information is necessary to guide policy solutions targeted at those in the distribution system making excess profits. Policymakers should start by prioritizing this information for drugs with the largest budget impact or price increases. Ideally, state laws should require drug-level disclosures.

To view an interactive map and table of the 35 bills analyzed, click here.