Much uncertainty surrounds the future of preventing, diagnosing, and treating Alzheimer’s disease (AD). In both AD and cardiovascular disease contexts, we have shown that an expert panel prediction was moderately accurate in forecasting future advances. This paper revisits expert predictions for future advances in Alzheimer’s disease made in 2001 and projects future breakthroughs over the next 20 years. Greater optimism among experts exists today compared to 2001, when experts accurately predicted limited breakthroughs over the next two decades (no breakthroughs judged with a 50% chance of occurring by 2021). The current panel, by contrast, judged 10 breakthroughs as at least 70% likely to occur by 2037. Breakthroughs most likely to occur were improved risk identification via assessment of functional and cognitive performance, genetic testing, imaging or other biomarker identifications; improved risk reduction through better control of cardiovascular disease-like risk factors, cognitive and social engagement interventions, agents targeting amyloid or interventions aimed at the neuroinflammatory/metabolic dysfunction hypothesis; and treatment of the disease using agents targeting amyloids for patients with prodromal Alzheimer’s or established dementia.

Dementia impacts more than 50 million people and kills about 1.5 million annually worldwide, making it the third-leading cause of death in high-income countries.[1,2] Alzheimer’s disease (AD) is the primary culprit. According to the Alzheimer’s Association, an estimated 5.8 million Americans are living with AD.3 Without effective therapies, 16 million Americans could have AD by 2050, with 9.1 million of those age 70 and older, according to projections by Zissimopolous et al.[3,4]

An increase in the number of seniors around the world is accelerating the global prevalence of AD, with a growing cost burden. In 2010, the U.S. healthcare system spent an estimated $300 billion on AD, a combination of both formal medical costs from physicians, hospital stays and prescription drugs ($180 billion) and informal costs incurred by home caregivers ($120 billion). The majority of the bill (75%) is shouldered by Medicare and Medicaid.[4] Left unchecked, these costs are projected to balloon in the coming decades, hitting an estimated $1.5 trillion by 2050.[3,4]

The need for a breakthrough in AD research is clear. When the U.S. Food and Drug Administration approved tacrine (Cognex®) in the early 1990s, the status quo of AD treatment was one of incremental but transient benefits to the minority of patients who tolerated treatments.[5] Over the decade that followed, academic researchers and drug manufacturers renewed their commitment to finding a way to prevent or cure AD, with several symptom-management therapies approved in the late 1990s and early 2000s.

Amid this sudden surge of innovation, a multidisciplinary group of medical, public health and policy researchers was convened in 2001 to assess the impact of new health technologies in the coming decades in three diseases that most severely impacted the elderly: cardiovascular disease, AD and cancer. By developing a group judgment process to rank the likelihood of different burgeoning advances in the prevention, diagnosis and treatment of these diseases, we hoped to inform better policy decisions when implementing these innovations.[6,7] As the 20th anniversary of this research nears, we assessed the accuracy of these predictions for AD and cardiovascular disease. We found that expert input, while not fully accurate, provided a useful lens into long-term innovation.[8]

Our work coincides with another wave of promising AD innovations: Clinical and preclinical research on AD has gained increasing support, with large flows of private and public funding supporting work on novel screening, diagnostic and therapeutic applications. In 2020, the National Institutes of Health will spend an estimated $2.8 billion on basic research[9] into AD and new treatments for the disease may become available should any Phase III agents receive regulatory approval.[10,i]

Prior attempts to assess potential future technologies have relied on at most a few experts, whose opinions were gathered and assessed informally. Twenty years ago, in response to a request from the Centers for Medicare & Medicaid Services, we developed a quantitative method that combined lessons learned from evidence-based medicine “horizon-scanning” literature searches and focused, multidisciplinary expert judgment.[6] During a face-to-face meeting, we combined features of the nominal group process to list and define potential innovations for further discussion, an informal group process to discuss the evidence and opinion regarding each topic, and formal voting to develop specific estimates for the likelihood of the innovation occurring in a predetermined time frame—in this case, 20 years. This process was modified from an established group-judgment process used to assess the clinical effectiveness of interventions.[11,12]

We first assembled a diverse group of six U.S.-based AD experts, including three experts who served on the panel years ago—Howard Federoff, Caleb Finch and Franz Hefti—along with new experts Paul Aisen, James Kirkland and Frank LaFerla. Their backgrounds and select areas of expertise are listed in Table 1.

The experts each generated a list of potential innovations over the next 20 years. From their input, we compiled the most commonly named innovations, augmented by a horizon-scan literature search. At a face-to-face meeting in June 2017, these were discussed and refined, then each potential innovation was evaluated one at a time, based on the evidence of their likelihood of occurrence. After each topic was discussed, we took a formal vote, using TurningPoint voting keypads to provide real-time results. Where panelists made directionally contrasting predictions, we reopened the discussion to determine whether the discrepancy was a result of an inadequately specified innovation or newly breaking research not known by all the experts. In either situation, we attempted to correct the issue and then conducted another vote. If, despite this, a wide dispersion of predictions remained, we did not attempt to force a consensus; rather, we took such results as an indication that experts have different views of the potential benefits of various innovations. Rationale for individual votes was not recorded; the median average deviation is presented to indicate the degree of consensus.

Potential innovations over the next 20 years were considered in three broad categories: risk identification, risk reduction and treatment of established disease. Across all categories, 23 innovations were discussed and voted on (Table 2).

Table 2: Panel Predictions for Breakthroughs in Alzheimer’s Disease by 2037 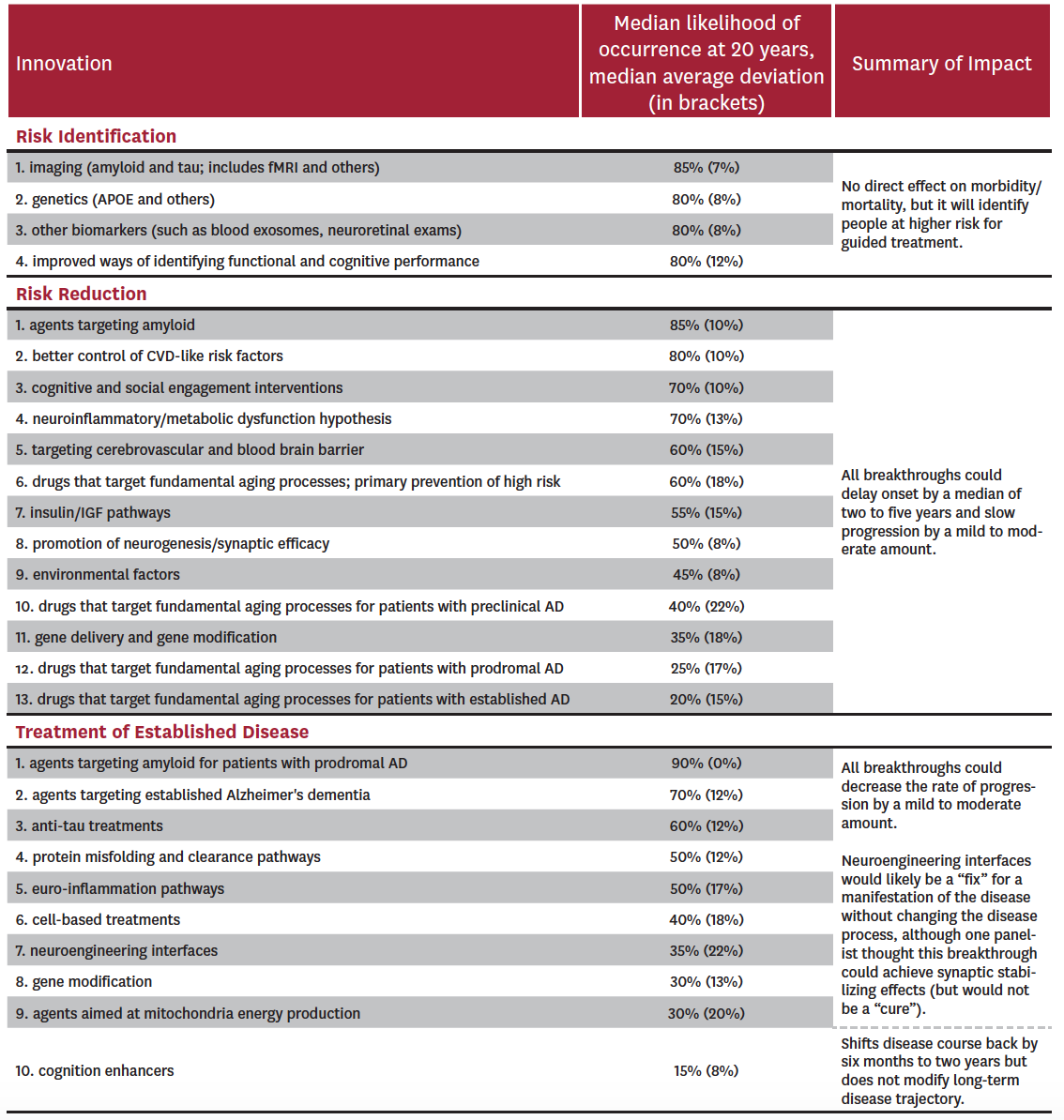 The experts considered four potential breakthroughs within risk identification: 1) imaging such as amyloid and tau PET and fMRI; 2) genetic profiling; 3) biomarkers such as blood exosomes and neuroretinal exams; and 4) improved ways of identifying functional and cognitive performance. All of these were considered likely to be in clinical use within the next 20 years, with median probabilities of occurrence at 85% for the use of imaging and 80% for the other three breakthroughs. Median average deviations ranged from 8% to 12%, suggesting a relatively high level of agreement. Risk identification alone does not result in better patient outcomes, but is expected to result in better care for persons at higher risk for the disease.

Finally, the experts considered 10 potential breakthroughs within treatment of established disease: 1) agents targeting amyloid metabolism in prodromal AD; 2) drugs targeting established Alzheimer’s dementia; 3) anti-tau treatments; 4) agents targeting protein misfolding and clearance pathways; 5) interventions aimed at reducing neuroinflammation; 6) cell-based treatments; 7) neuroengineering interfaces; 8) use of gene modification; 9) agents targeting mitochondria energy production; and 10) use of cognition enhancers. Only two of these potential breakthroughs were considered to have a 70% or greater probability of being used clinically within 20 years: (1) agents targeting amyloid metabolism at either the prodromal phase[ii] (median probability of 90% with a median average deviation of 0%) or (2) established disease phase of AD (median probability of 70% with a median average deviation of 12%). Experts were most skeptical about use of cognition enhancers and drugs that target fundamental aging processes in patients with established AD (median probabilities of 15% and 20% with median average deviations of 8% and 15%, respectively).

This work has several limitations. First, our findings may not be representative of the broader AD research and clinical communities. However, the composition of experts and the panel process followed the same methods as our work 20 years ago, which resulted in reasonably accurate 20-year predictions of possible AD breakthroughs. Nevertheless, future applications may wish to assess our predictions with predictions gathered from a larger sample of AD experts. This type of external validity assessment was conducted for appropriateness criteria for coronary angiography using the RAND Appropriateness Method, the method that we modified for use in these predictions.[11,12] In that instance, a sample of 1,058 clinicians largely agreed with the ratings of appropriateness provided by a nine-person expert panel.[13] Thus, in the only published test of the external validity of the RAND Appropriateness Method, the results were found to have good external validity, so there is some evidence to expect that the views of a larger group of practicing AD clinicians might be similar to what we report here.

Second, our goal was to develop 20-year horizon predictions. The choice of the horizon involves a trade-off between uncertainty in the predictions and the time available for planning and action in anticipation of need. Thus, predictions of future breakthroughs in the next five years should be more accurate but might not provide sufficient time to plan for dramatic changes in diagnosis or treatment. Future applications of this method may choose to use a range of horizons, such as five years, 10 years and 20 years.

Far greater expert optimism exists about breakthroughs in AD in the next 20 years than in the prior 20 years. In our assessment, 10 breakthroughs were judged as being at least 70% likely to occur by 2037, whereas in our 2001 study no breakthrough was judged as being even 50% likely by 2021. This optimism is reflected in the clinical pipeline for novel therapies, with a wide range of possibly disease-modifying biologics and small molecules now in Phase II and III clinical trials.[14]

However, challenges remain in delivering the predicted new AD therapies to patients, ranging from the use of appropriate cognitive screening tools[15] to the preparedness of national healthcare systems to diagnose and treat large numbers of potentially eligible patients.[16] In addition, reimbursement of therapies shortly before age 65 (and Medicare eligibility) may be fraught with free-rider issues on the part of private payers, possibly resulting in delays in access. Finally, per capita healthcare spending—after adjustment for inflation—rose 32.5% between 2003 and 2018.[17] This pressure on costs also means that, even if the science is there to support breakthroughs, market conditions may delay or interfere with patient access to such innovations.