The American Health Care Act (AHCA), which was passed by the House of Representatives on May 4, would alter how the costs of state Medicaid programs are shared between the federal government and states. In “Effects of the Medicaid Per Capita Cap Included in the House-Passed American Health Care Act,” (PDF) Loren Adler, Matthew Fiedler, and Tim Gronniger examine how this change in Medicaid’s financing structure would affect states’ Medicaid programs. Under the current Medicaid program structure, the federal government pays for a specified share of the cost of medical care for eligible individuals, while state governments pay for the remainder. The AHCA would cap the total amount of federal funding that states could receive for each person they enroll, a structure commonly referred to as a “per capita cap.” The cap on federal funding, which would take effect in 2020, would be set based on states’ per enrollee spending in 2016. Thereafter, the cap would be adjusted based on changes in the Consumer Price Index for Medical Care (CPI-M), as well as changes in the share of enrollees in a set of specified eligibility categories.To gain insight into the likely effects of this change in Medicaid’s financing structure, the authors examine how state and federal budgets would have been affected if a similar proposal had been implemented in the recent past. In particular, they use state-level data on historical Medicaid spending published by the Kaiser Family Foundation to examine how states would have fared in 2011 had a cap with the structure specified in the AHCA been implemented in 2004 based on spending levels in 2000. The authors chose this time period because of the ready availability of suitable data.The analysis reaches five main conclusions: 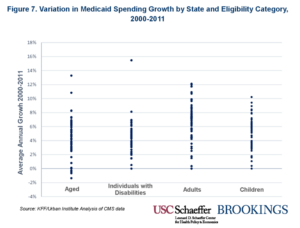