Editor’s note: This white paper is part of the USC-Brookings Schaeffer Initiative for Health Policy, which is a partnership between the Economic Studies Program at Brookings and the USC Schaeffer Center for Health Policy & Economics. The Initiative aims to inform the national health care debate with rigorous, evidence-based analysis leading to practical recommendations using the collaborative strengths of USC and Brookings. The Robert Wood Johnson Foundation provided a grant to the Brookings Institution that supported the writing of this paper. 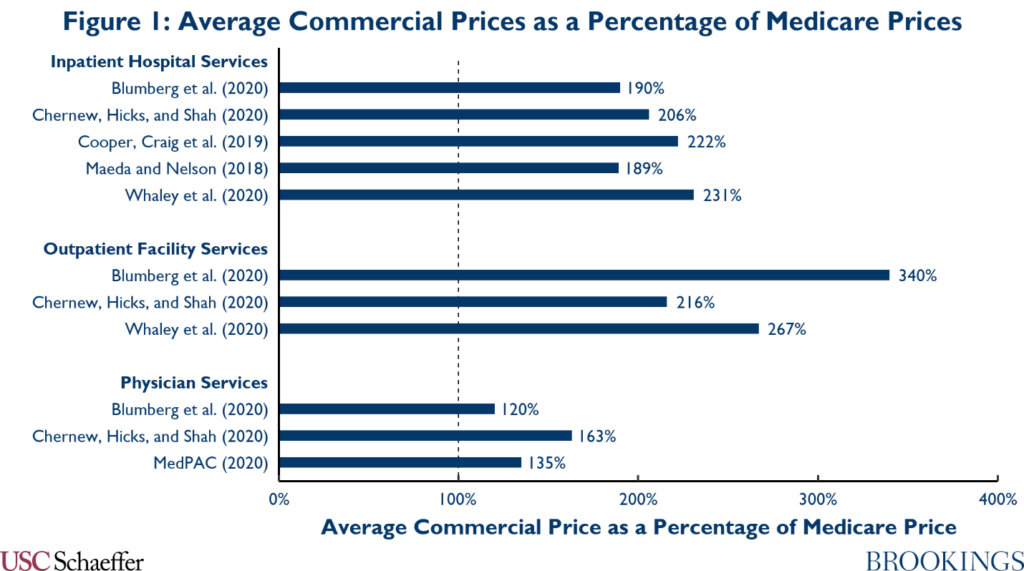 These differences arise because commercial insurers and Medicare determine prices differently. Medicare sets prices administratively (that is, via fee schedules established by law and regulation), with the goal of ensuring beneficiaries have a broad choice of health care providers while containing program costs. By contrast, commercial insurers must negotiate prices with providers. Because many providers face relatively limited competition, providers are often able to negotiate much higher prices.

These price differences have led some policymakers to propose a larger public role in determining provider prices in commercial coverage. In a new paper, I analyze four ways of expanding the public role: (1) capping prices for out-of-network services; (2) capping prices for both in- and out-of-network services; (3) an alternative approach to price regulation that I term a “default contract” approach; and (4) creating a public option, a publicly operated plan that would set prices administratively and could be purchased instead of a private plan. This page briefly summarizes my main conclusions. The paper’s executive summary provides a more detailed overview of my findings, while the paper presents the full details.

Conclusion #1: Capping out-of-network prices could greatly reduce prices for emergency services but would likely have only small effects on the prices of most other services.

One commonly discussed approach to regulating provider prices is to limit what providers can collect for out-of-network services, such as at some multiple of what Medicare would pay for the same services. While this approach would directly reduce prices for only the relatively small share of services that is delivered out-of-network, in some cases it could also reduce negotiated prices for in-network services.

In particular, with an out-of-network cap, an insurer can always break off negotiations with a provider and pay the provider the capped price. If the insurer can do this without jeopardizing its enrollees’ access to the provider’s services, then this option gives the insurer leverage to insist on an in-network price no higher than the cap. Federal law bars hospitals from turning away patients in emergency situations, so this logic suggests that an out-of-network cap could greatly reduce prices for emergency care.

Conclusion #2: Capping both in- and out-of-network prices could generate broader price reductions but could also create various enforcement challenges.

Because an out-of-network cap would likely do little to reduce prices of non-emergency services, policymakers might instead consider limiting what providers can collect for all services, whether delivered in or out-of-network. On paper, this type of “comprehensive price cap” could reduce prices for all services, including services delivered in non-emergency settings. But a comprehensive price cap could have other limitations. While this type of cap would keep providers from translating a strong bargaining position into high prices, providers might respond by seeking other types of concessions from insurers.

Notably, providers might demand that insurers pay higher prices for services where the cap does not apply or does not bind. For example, a health system with a high-priced flagship hospital could seek higher prices for its lower-priced community hospitals or its physician practices. Evasion concerns would likely also require policymakers to limit use of alternative payment models, like bundled payments or shared savings contracts, to prevent them from be used to “hide” payments to providers. Providers might also seek non-price concessions. For example, they might resist contract provisions aimed at reducing utilization, a concern under past state hospital rate setting systems.

Conclusion #3: An alternative way of regulating in-network prices, the “default contract” approach, could achieve broad price reductions while avoiding the problems of a comprehensive price cap.

Motivated by the limitations of a comprehensive price cap, the paper also considers an alternative approach to regulating in-network prices called a “default contract” approach. Under this approach, policymakers would publish a model network agreement (the “default contract”) that specified both the prices the provider would be paid and a minimum level of access the provider must offer to the insurer’s enrollees. A provider would be required to sign a default contract with any insurer that requested one, but providers and insurers could also negotiate any alternative payment terms they wished.

Conclusion #4: A well-designed public option could offer consumers a new lower-premium option and reduce the premiums of private plans. 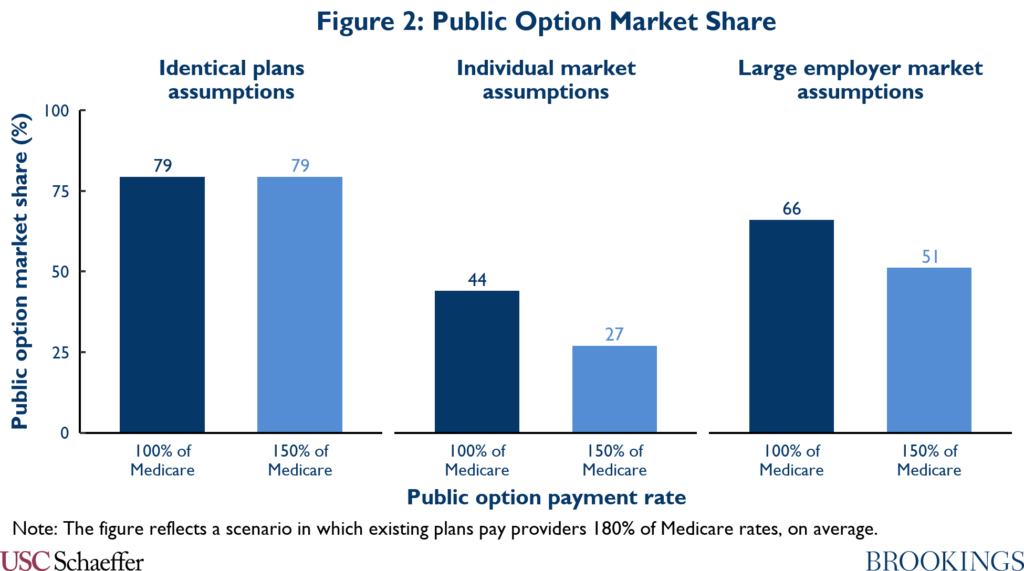 Conclusion #5: If policymakers’ sole goal is reducing provider prices, a default contract policy is likely their best option, but a public option could address both provider prices and insurer market power.

I close by considering how policymakers might chart a path forward. A threshold question is whether policymakers should use any of the tools considered here and, if so, how aggressively. This paper does not shed new light on that question, as it turns on factors beyond the scope of this analysis, notably how providers would change their service offerings in response to these policies over the long run and how those changes would affect patient care and the real resources consumed by the health care sector.

But this paper does offer clear guidance on how policymakers might choose among the policy tools considered here. First, an out-of-network cap or a comprehensive price cap is unlikely to be policymakers’ best option. An out-of-network cap likely has little ability to reduce the prices of non-emergency services, and it could reduce access to out-of-network care. A comprehensive price cap could reduce prices in all settings, at least on paper, but would face a range of enforcement challenges. By contrast, a default contract policy could reduce prices in all settings without the main downsides of the other approaches.

While this paper focuses on the substantive tradeoffs among these policies, policymakers would also need to consider the political feasibility of alternative approaches. Political considerations might be particularly important to the choice between a public option and a default contract policy. Notably, introducing a public option would threaten the interests of insurers in addition to providers and thus could spark broader industry opposition. However, insurers are deeply distrusted by the public, so a public option that offered consumers a concrete alternative to private insurance plans could have broad public appeal, consistent with public opinion data showing broad support for a public option.