Civics has become one of the most polarizing topics in the politics around K-12 education. The controversy surrounds bills in process or passed in eight states that would limit civic education by prohibiting discussion of racism—and in some states even the discussion of current events—in public school classrooms. And this super-politicization of civic education is threatening the Civics Secures Democracy act, a landmark bipartisan bill in support of civic education that would infuse the teaching of civics with $1 billion annually.

But while state and federal politics may indicate that the nation is at an impasse and simply cannot see eye to eye on anything, least of all how to prepare children for U.S. citizenship, in reality parents–and adults without children in the home—agree across the aisle more than disagree when it comes to civic education. We hope for the good of the people, our politicians pay better attention to the will of the people, and work together to solve what has become a crisis for civic education.

Between mid-April and the end of May 2021, the University of Southern California Dornsife Center for Economic and Social Research asked 1,510 K-12 parents from the nationally representative Understanding America Study (UAS) how important they feel it is for students to learn about civics education topics in school. As we show in Figure 1, we found parents across political parties feel it is important or very important for students to learn about how the U.S. system of government works (85%), requirements for voting (79%), the U.S.’s leadership role in the world (73%), the federal government’s influence over state and local affairs (72%), how students can get involved in local government or politics (71%), benefits and challenges of social programs like Medicare and Social Security (64%), and contributions of historical figures who are women (74%) and racial/ethnic minorities (71%). 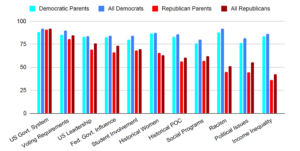 Figure 1: U.S. adults views on the importance of students learning about civic education topics, by partisanship and whether a parent of a K-12 child.

There were, of course, some partisan differences. Lower proportions of Republican parents deem important discussion of topics including the U.S. leadership role in the world (67%), federalism (64%), social programs (54%), how students can be involved (65%), and contributions of women (65%) or racial/ethnic minorities (60%). But the clear majority of parents across political parties feel learning about each of these topics is important for students.

A minority of Republican, and non-politically identified parents feel it is important or very important to discuss political issues like immigration or gun control (43% Republican, 76% Democrat), or for students to learn about racism (46% Republican, 87% Democrat) and income inequality (37% Republican, 83% Democrat) in the U.S. However, when we asked the same UAS parents of K-12 children whether they had discussed racism with their children back in June-July 2020, immediately after George Floyd’s murder, a majority of Republicans had (64%), as had Democrats (85%).

Parents and the adult population more broadly, overwhelmingly, support the schools educating students about the rights and responsibilities of citizens, no matter their political leanings, and the majority of U.S. adults across parties also feel children should be discussing political issues and racism at school.

We hope those in control of the fate of the Civics Secures Democracy Act will also put their politics aside, listen to the people, and support a bill that will help all Americans be better Americans.

We gratefully acknowledge financial support from the National Science Foundation Grants No.2037179 and 2120194. Any opinions, findings, and conclusions or recommendations expressed in this material are those of the author(s) and do not necessarily reflect the views of the National Science Foundation. Thank you to Morgan Polikoff, Daniel Silver, Michael Fienberg, Shira Haderlein, Amie Rapaport, Marshall Garland, and the UAS administration team for their contributions to this work.