Several recent surveys in the United States, including our own USC Dornsife Center for Economic and Social Research’s Understanding Coronavirus in America tracking survey, have shown that most Americans say they are wearing masks. In our survey, only a small minority of U.S. residents claim masks are a health hazard or political gimmick. However, even though mask-wearing seems to be widespread, we also find that many people have not been wearing them according to recommended guidelines, and there are different mask-wearing norms in different areas of the country.

In a mid-July ABC News/Washington post poll, 6-in-10 wore a mask all of the time and another nearly 1-in-4 some of the time. In an Axios/Ipsos poll from early August, two-thirds claimed to be wearing a mask at all times, and more than 1-in-5 sometimes. Our own tracking graphs have shown a steady upward trend in mask wearing over the last few weeks, increasing from 8-in-10 in early June to 9-in-10 in early August.

As shown in the chart below, our survey shows that mask-wearing has differed significantly by location: Wearing a mask was adopted most quickly and broadly in urban areas and has changed little over the late spring and summer. Mask-wearing in the suburbs was at 80% by May and continued to increase during the summer to reach 89% in August. In rural areas where outbreaks were rare in the spring, fewer residents were wearing masks than in other areas and mask-wearing had started to decline in late June. However, after coronavirus cases in some previously untouched areas began to spike in July, mask-wearing increased more than 10 percentage points in rural areas and reached 83% in August. 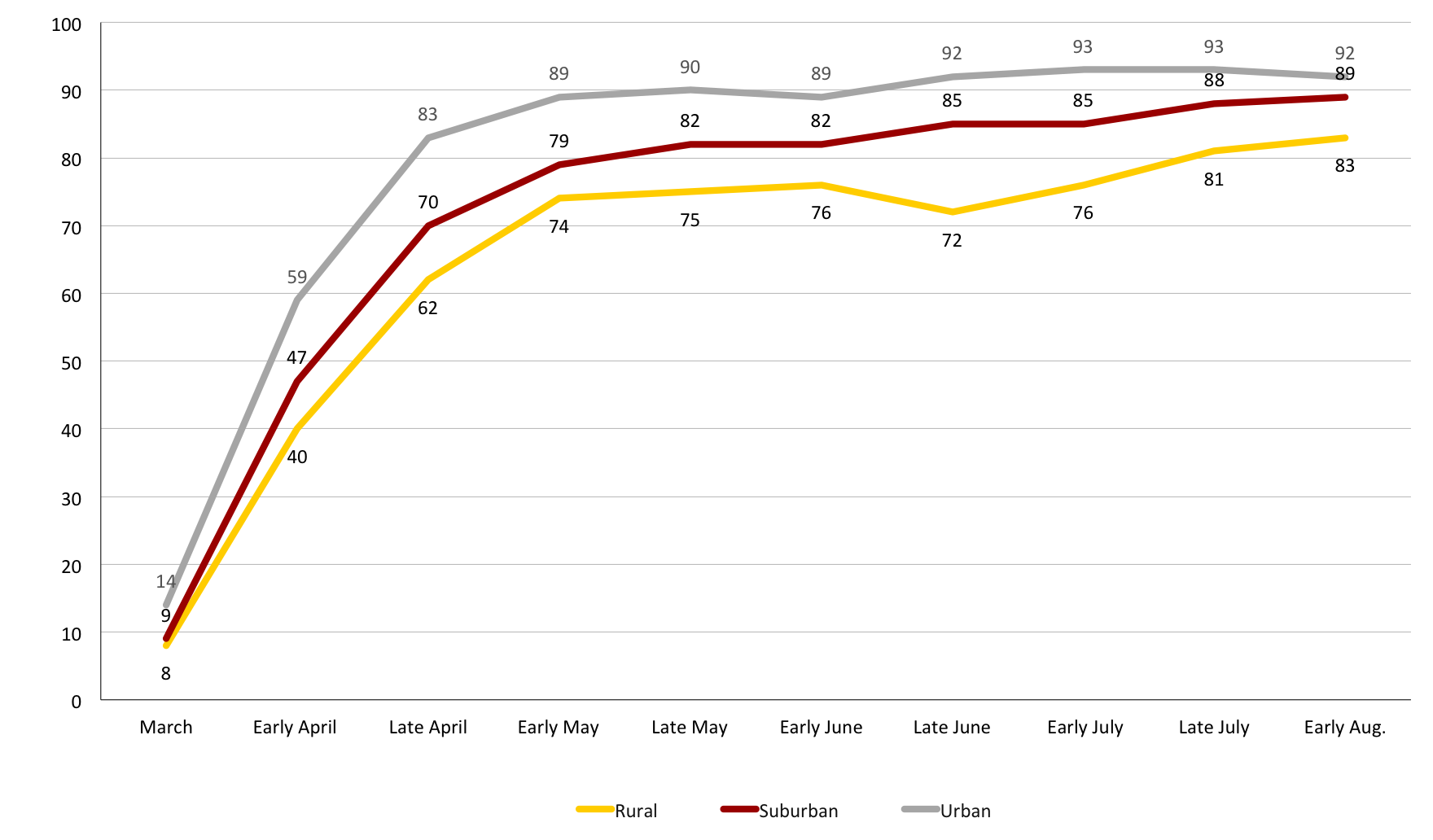 The high proportion of U.S. residents wearing masks would seem to be good news for helping to control the spread of the virus. The U.S. Centers for Disease Control and Prevention recommendations for inhibiting the spread of the virus include social distancing, and wearing a mask in public settings and when in close proximity to people who don’t live in your household. Even President Trump, once publicly skeptical of mask-wearing, has now recommended that his supporters wear masks.

Recent research has indicated that mask-wearing is important and helps slow the spread of the coronavirus. The latest projection models from the University of Washington’s Institute for Health Metrics and Evaluation indicate that if everyone in the country wore a mask when needed 66,000 fewer people would die from COVID-19 by December 1.

Our own research indicates that most U.S. residents view masks as protective. We asked tracking survey participants to indicate if they agreed or disagreed with several statements about wearing masks and face coverings. Overall, nearly two-thirds of respondents in our most recent survey agreed that wearing a mask keeps them safe from the virus and three-fourths agreed that it keeps others safe.

Indeed, at the time of this writing some parts of the country that were slower to implement social distancing and mask-wearing guidelines and some states, like California, where loosening of restrictions in June undid earlier work of containing the virus had been forced to take additional measures to contain outbreaks. The increase in mask wearing we are seeing in recent weeks may be a contributing factor to the recent flattening of curves in many of these places.

However, the adoption of CDC guidelines for mask wearing has not been consistent and goes beyond merely location. We took a deeper look at the behavior of those who have been venturing out of their homes this summer and what we found indicates that many people who said they were wearing masks have not been doing so according to recommended guidelines, nationwide.

Participants in our tracking survey were asked: if they had been in close contact (within 6 feet) with non-household members in the prior week; gone to a friend, neighbor or relative’s house; shopped at a grocery store; attended a gathering of more than 10 people; had gone outside to exercise; or attended in-person religious services, among other behaviors. Those who had done each of these activities were asked how often they wore a face mask or covering: always, most of the time, sometimes, rarely or never. 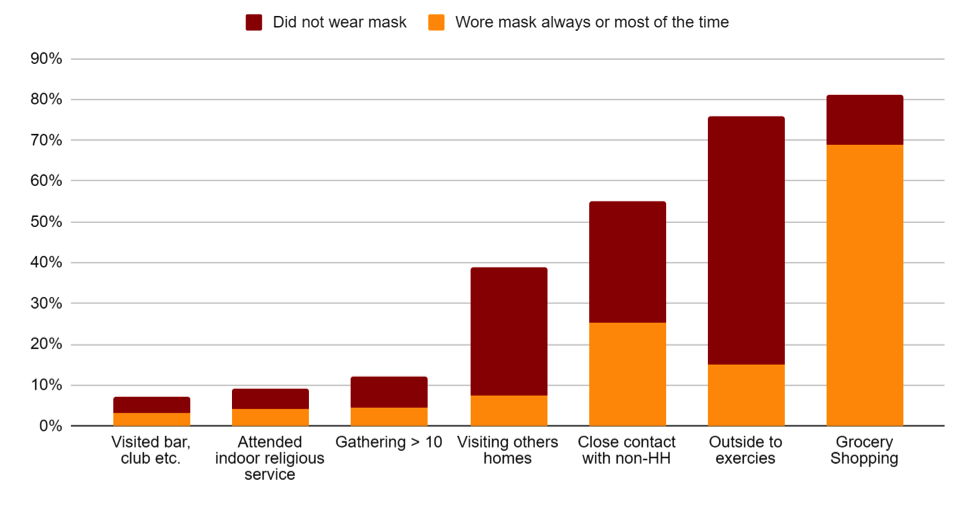 The highest incidence of both the activity and mask-wearing was in grocery shopping. Most residents had shopped for groceries in the prior week, and 85% wore a mask while shopping. About three quarters went out for exercise, but only 2-in-10 wore a mask while doing so. Some evidence points to lower incidence of spread outdoors, particularly in sunshine, and we have all seen the photos of crowded beaches full of mask-free sunbathers. CDC guidelines do make an exception for people who may have trouble breathing while doing vigorous exercise outdoors.

The chart also shows that other activities were less common but potentially more problematic. Indoor activities, singing, and drinking alcohol all generate conditions where social distancing is difficult and conditions are more conducive for spread. Roughly half of residents reported that they had close contact with non-household members in the prior week and nearly four-in-10 visited someone else’s home. Smaller proportions – roughly one-in-10 in each case – attended a gathering of more than 10 people, went to in-person religious service, or went to a bar, club or other gathering place. In each of these situations, fewer than half of those who were engaged in the activity wore a mask most of the time.

We see evidence that people are wearing masks more frequently following the resurgence of the virus in June, particularly in the areas that were slower to adopt them. The chart below shows a small but statistically-significant increase in recommended mask-wearing behaviors among rural and suburban residents when they are in close proximity to non-household members. Not shown are similarly small but significant increases in mask-wearing among people in rural and suburban areas attending gatherings of 10 or more, visiting others in their homes, and attending in-person religious services.

However, the charts also show that as of late July, 46% of urban residents, 54% of suburbanites, and two-thirds of rural residents were still not routinely wearing masks when in close proximity to non-household members. 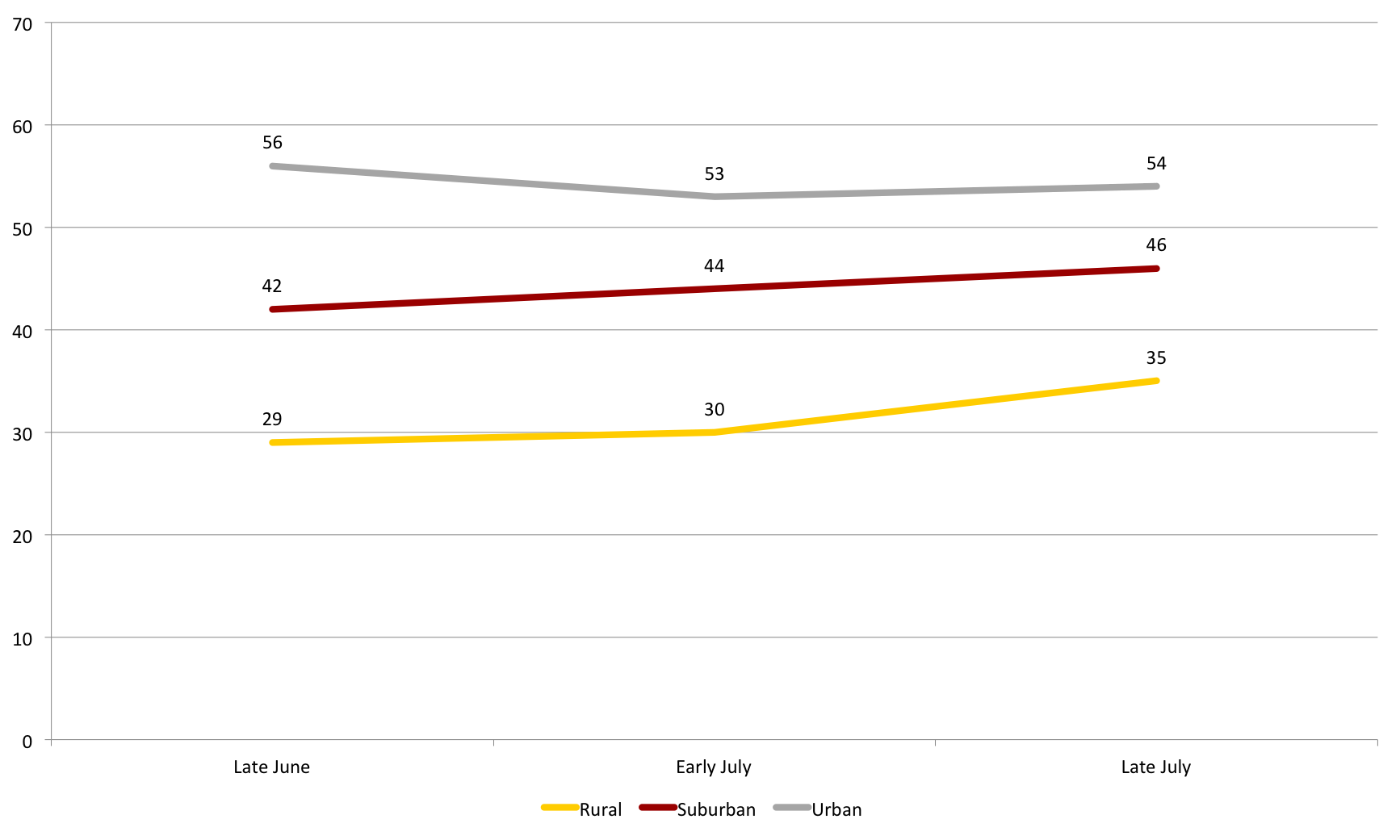 Mask-wearing while grocery shopping increased strikingly over the summer, as many retail chains and grocery stores began mandating, rather than recommending, that shoppers wear masks. Overall, the percentage of grocery shoppers who wore a mask all or most of the time increased twelve percentage points – from 73% to 85% – from June to August.

As shown in the chart below, the greatest increase in mask-wearing was among rural grocery shoppers who were sixteen percentage points more likely to wear a mask in late August than in June, along with those in the suburbs who were fourteen points more likely. However, one out of four rural grocery shoppers still were not routinely or ever wearing a mask in late July compared to one out of ten urban shoppers and 12% of those in the suburbs. 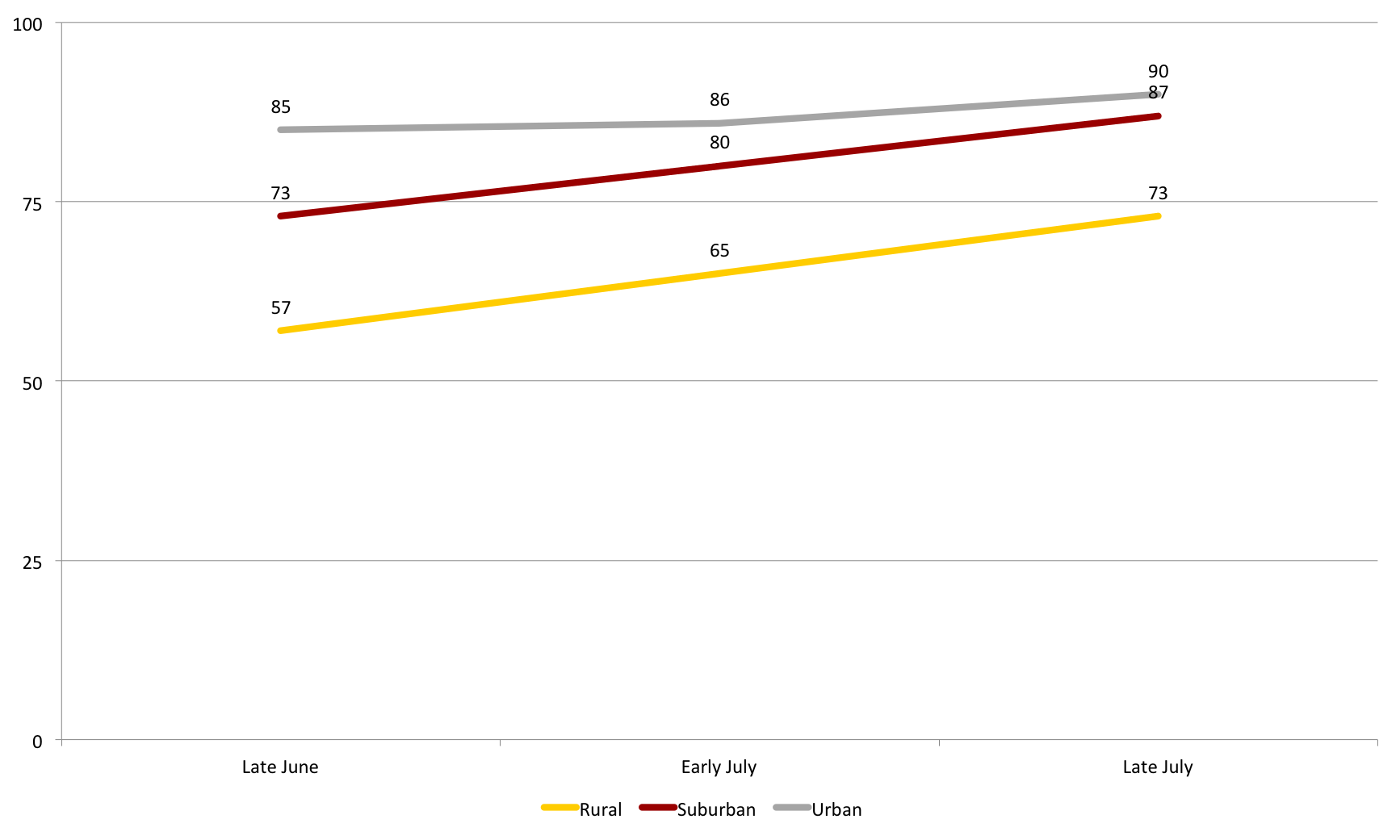 When those who feel strongly against wearing masks attack others for doing so, it makes for dramatic news stories and viral videos. However, our survey finds that strong feelings against masks are fairly rare across the country, if somewhat more pronounced in rural areas.

Roughly 1-in-10 residents overall saw masks as dangerous to their health (9%), or as being a political statement (13%). Only 7% indicated that wearing a mask is unnecessary because coronavirus is not a serious threat. One-in-four overall agreed that masks are too uncomfortable to wear. Almost no one indicated that they cannot afford to wear a mask (3%). Just over 2-in-10 nationwide, and more than 3-in-10 in rural areas, agreed that no one can force them to wear a mask because this is a free country; a position one can hold even while wearing a mask.

Strong feelings against mask-wearing were more pronounced in rural areas, with 30% saying that masks are too uncomfortable to wear, 16% seeing masks as dangerous, 17% seeing mask-wearing as political. Interestingly, only 1-in-10 rural residents believe masks are not necessary because the virus is not a serious threat.

In summary, our survey indicates that most U.S. residents recognize the protective importance of wearing a mask in public, and about 9-in-10 are using face coverings at least sometimes. Our findings indicate that mask-wearing norms are different depending on the type of area where you live, with rural residents being the slowest to adopt face coverings. We also see evidence that mask wearing behaviors have increased somewhat across the summer resurgence of the coronavirus. Only small minorities believe that masks are dangerous to health, or view them as a purely political gimmick.

However, more troubling, our findings also indicate that the nearly 6-in-10 residents who are no longer staying home except for exercise and essentials are not always wearing masks in situations where they are recommended. These mixed findings, and their variation by location, may be the result of the kinds of mixed messages and mixed sets of recommendations and regulations provided at the federal and state level.

The much higher level of adherence to mask-wearing while grocery shopping, compared to other situations with potential for virus transmission, may be the result of major retailers and grocery chains like Walmart, Costco, and Kroger requiring shoppers to wear face coverings in their stores. Even hold-outs like Winn Dixie began requiring masks in late July. Given the reluctance of many individuals to adhere to safety recommendations for social distancing and mask-wearing, it is even more important for government at the federal, state and local levels to provide a coherent and unified approach. It is difficult to see how containment will be possible, otherwise.

About the survey: The source of this report is the COVID-19 tracking survey “Understanding Coronavirus in America,” Participants in the survey are members of the probability-based online panel The Understanding America Study, which is maintained by the Center for Economic and Social Research at the University of Southern California. The report references nine waves of data collected between March 10 and August 4, 2020. Graphs from the tracking survey are updated daily online. For more information about the way the survey was conducted, visit uasdata.usc.edu. The content of this publication is solely the responsibility of the authors and does not necessarily represent the official views of USC or CESR. The collection of the COVID-19 tracking data is supported in part by the Bill & Melinda Gates Foundation and by grant U01AG054580 from the National Institute on Aging.