The great recession, which hit the world at the end of 2007 affected workers and families in the U.S. in very different ways. Workers with low socioeconomic status (SES) – those with fewer skills and education, as well as racial and ethnic minorities – were especially hurt by the downturn. Foreclosures were concentrated among minorities, and households with lower incomes.

While the COVID-19 pandemic and the impending recession feel unprecedented, one pattern is eerily familiar. Low-SES workers and households are most likely to be hit hardest again. In a survey we conducted in the Understanding America Study between March 10 and March 16, we asked respondents three questions about how the COVID-19 pandemic might affect their work and income. We asked whether their jobs allow them to work from home if required. We also asked how likely they think it is that they will lose their job or run out of money within the next three months. 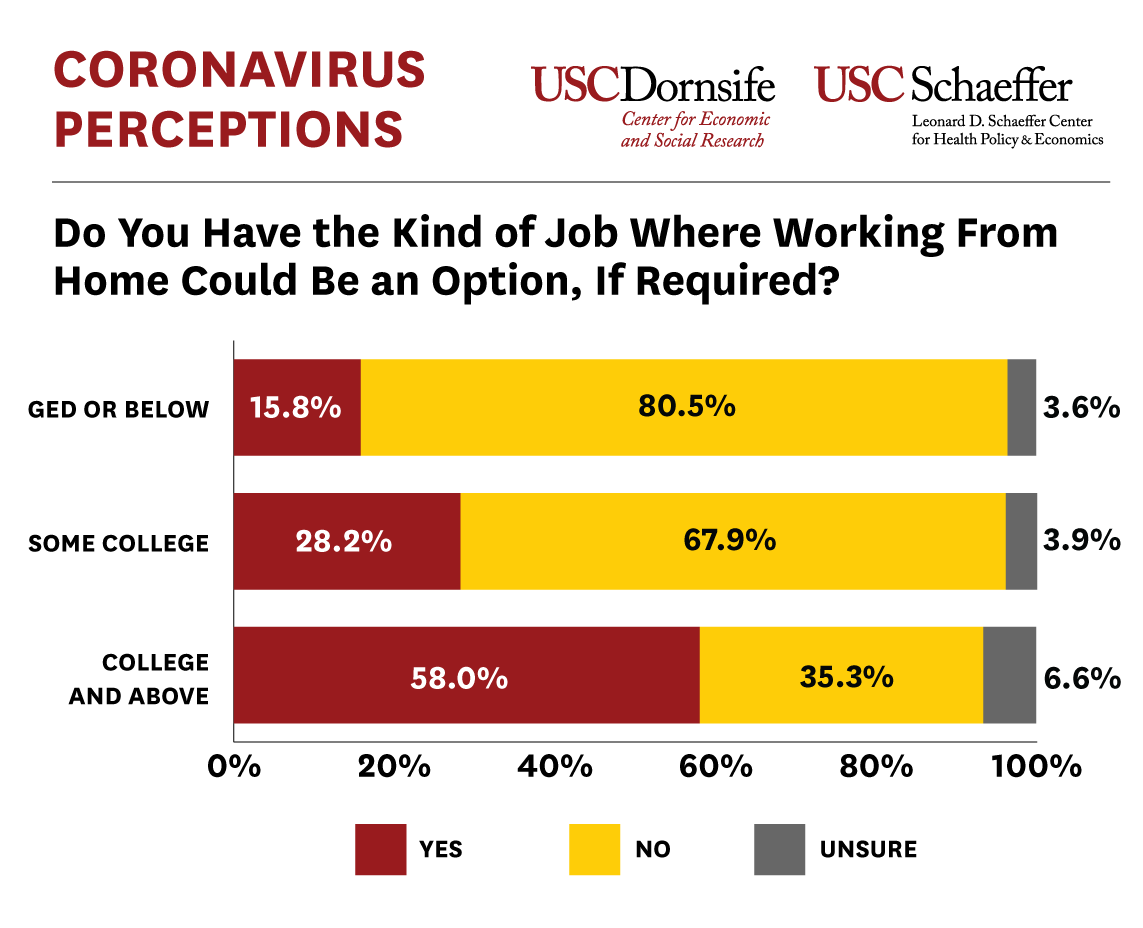 While white-collar workers can meet remotely through teleconferences, Slack, email and other applications, many blue-collar jobs require face-to-face and physical interactions that cannot be carried out remotely. Retail clerks and people in vocational trades must be physically present to carry out their jobs. This requirement makes them vulnerable to quarantine restrictions that mandate the closure of non-essential businesses and otherwise limit in-person economic activity.

When asked for the percent chance they we will lose their job as a consequence of the coronavirus epidemic, patterns are very similar. Compared to those with a college degree, workers with a high school education perceive nearly-double the chance they could lose their job in the next three months (13.5% versus 8%).   Similarly, workers with household incomes below $25,000 perceived a risk of unemployment that was nearly three times higher than workers with household incomes greater than $75,000 (18.7% versus 6.5%). Whites report an average probability of job loss equal to about 8 percent, while Hispanics/Latinos believe their probability of job loss is more than twice as high (18%).

Of course, there is also a big difference between the effect of the Great Recession and the one triggered by the COVID-19 pandemic. The Great Recession was related to economic imbalances in the housing market, and was not directly about the viability of face-to-face jobs. In the current crisis, the need to work face to face exposes low-SES workers to additional infection risks that high-SES workers can avoid. Disparities in access to healthcare may further compound this pattern. The people who are most vulnerable to the economic effects of the pandemic, are also most likely to have their health compromised as a result.

The authors are researchers at the Center for Economic and Social Research at the USC Dornsife College of Letters, Arts, and Sciences; all results cited in this blog are based on survey data posted here.