Between Harvey, Irma and Maria, this year’s Atlantic hurricane season has brought destructive floods and rains to many US cities and towns. Each case saw an outpouring of public support, as private citizens went out of their way to fish neighbors out of flooded homes and donate time and money to the rescue effort. Many more have given financial aid from across the country in a collective display of altruism.

For social scientists, trying to understand what inspires people to overcome transaction costs and free-riding to give resources to strangers in different cities or even countries presents an interesting puzzle. What drives people to give, and how we might nudge people to give even more are some of the questions that motivate behavioral research in charitable giving and altruism.

In September the University of Chicago, the University of Indiana Lilly School of Philanthropy and the University of Southern California co-hosted the annual Science of Philanthropy (SPI) conference, gathering researchers and practitioners to discuss these research questions. Topics of discussion ranged from how political and personal beliefs, information about NGO overhead or peer behavior affect charitable giving, to how organizations can increase donations by using behavioral strategies like matching donations, framing the ask with personal examples (NGOs often have individual success stories promoted on their web pages), or reducing the number of steps to giving (think of Facebook’s no frills “make a donation” buttons that pop up during natural disasters).

The conference kicked off with the first keynote by Ragan Petrie, a behavioral economist at Texas A&M University who talked about her work studying online donations, and about how using experimental methods can help illustrate motives and barriers to giving. Past studies have shown that people go out of their way to avoid being solicited, whether it be walking through the other grocery door to skipping the Salvation Army Santa or hanging “No Solicitation” signs at home.  In one study, Dr. Petrie studied an online contest in which people could vote for their favorite local animal shelter. She randomized participants to different groups, such that some groups were told ahead of time that they would be solicited to give to the shelter after casting their vote. Results showed those who were expecting the ask were significantly less likely to donate. Similarly, related research finds that people who see the Salvation Army Santa coming tend to steer clear, while those who are surprised by a solicitation may donate more.

In another study conducted by Dr. Petrie, subjects donating to an NGO were given the option to have their donation increased by the charity (a $1 or $5 add-on) if they agreed to invite Facebook friends to also donate. Some subjects were willing to invite friends on their Facebook wall, provided they get credit for the add-on donation. The conclusion is that people can be incentivized to pressure peers into giving, but getting recognition for their effort is important to potential donors.

Lise Vesterlund from the University of Pittsburgh gave the second keynote. Dr. Vesterlund talked about how we can better design charitable asks. Dr. Vesterlund pointed out that people have different motives to give, and that can affect how they respond to certain fundraising tools.

Donor motives can be categorized either as altruistic, where donors get their satisfaction (economists call this ‘utility’) from the output of the charity, or warm-glow motivated, where charity behaves more like a public good, and donors get satisfaction because donating makes them feel good. This is important in practical terms due to crowd-out. Crowd-out is the idea that people reduce their giving to a charity if the charity receives other forms of donations, i.e., a large gift or grant from the government. Economic theory suggests that crowd-out should happen for altruistic donors, but not warm-glow donors. In practice, we do see some effects of crowd-out, but government grants do not completely crowd-out private donations.

Crowd-Out as a Function of Giving by Others 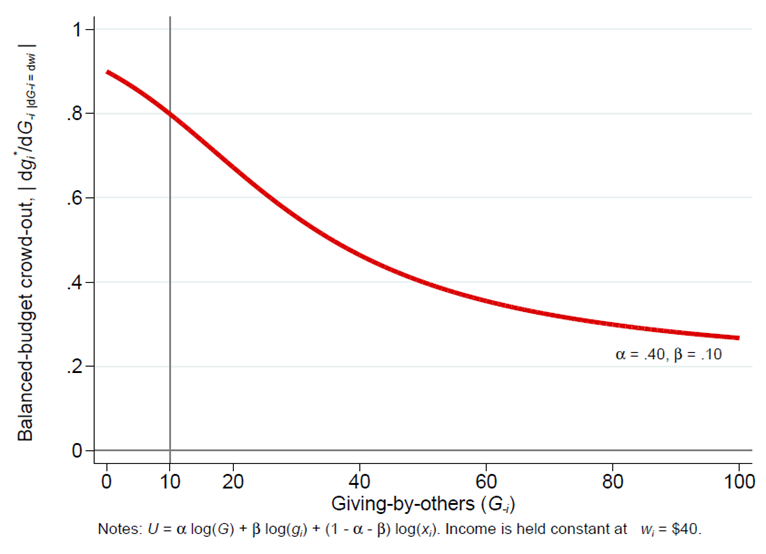 Next, Dr. Vesterlund talked about how responses to different charitable campaigns may differ by donor type. When the giving of others is announced, the total amount donated by altruistic donors should go down. However, as Dr. Vesterlund notes, announcements can serve a secondary purpose of signaling charity quality, so in cases of uncertainty about an NGOs quality, announcements from others can increase the amount donated. Related work confirms this result in the case of public radio donations, where announcements increased donations by new members, but not renewing members.

A common solicitation technique is offering a matching gift for a donation. We expect warm glow donors to be unaffected by this technique, because matching doesn’t increase their personal contribution. Altruistic donors may or may not be affected by matching. Indeed, there is evidence to suggest that matching only has a small effect on increasing overall donations. Dr. Vesterlund concluded by saying that more research is needed to understand how donor motives interact with different fundraising tools.

The SPI conference offered a unique chance for researchers and practitioners in disparate fields to meet and discuss ideas about how charitable giving works, and how it can be improved. Learning more about what motivates individual giving and altruistic behavior is important for many organizations, from local homeless shelters and food banks to the Red Cross and NPR. It is also academically interesting, offering clues into how altruism aids and informs large scale human cooperation in impersonal groupings. The team is looking forward to hosting next year’s SPI conference at University of Indiana Lilly School of Philanthropy in Indianapolis.