The news in recent years that the Census Bureau projected white Americans to become a minority of the U.S. population within 30 years has reverberated across the political spectrum. Pat Buchanan’s blog ominously concluded “A.D. 2041 The End of White America?” while Charles Blow’s column in the New York Times ridiculed “white extinction anxiety.”  Social scientists in multiple disciplines reported that fears of lost majority status had engendered anxiety about anti-white discrimination, stoked hostility to immigration, decreased support for redistribution and public spending, and even shaped the 2016 presidential election (for more on this see here, here and here).

The conventional wisdom is that little can be done to stem the tide of white backlash. Recent research suggests that this pessimistic view is wrong. Crucially, researchers and public intellectuals have mistaken whites’ reactions to the demographic fact of rising ethnic diversity with reactions to a political narrative about white decline purveyed through the media. This interpretation needs to be reconsidered in light of mounting evidence about the changing meaning of racial identity in America.

We conducted two survey experiments to measure white Americans’ reactions to alternative scenarios derived from these disparate projections. Each of the scenarios informed readers about rapidly rising diversity driven by growing Hispanic and Asian populations. Some scenarios followed the standard narrative in highlighting a binary white-nonwhite divide, white decline, and a majority “non-white” future. Others emphasized the ongoing rise of mixed-race marriage and multiracial identification, trends that are expanding the boundaries of “whiteness” toward greater inclusivity and blurring traditional color lines in the 21st century.

Our first experiment, conducted in August 2016, randomly assigned non-Hispanic white respondents to read one of four “news stories” constructed from various narratives. One news story dealt with conservation and made no mention of changing demographics. A second story described forecasts of ongoing growth in the country’s Hispanic and Asian populations but said nothing about a majority-minority future or multiracialism. A third white minority story mimicked prevailing media accounts of racial change by appending a discussion of how rising diversity and declining numbers of whites would make America a majority-minority country by 2044. Finally, a multiracial+white majority story replaced the standard white decline appendage to the diversity story with information about increased interracial marriage and the rise of identification as both white and non-white race or ethnicity. Consequently, the white majority would persist but become a more diverse lot and encompass groups traditionally seen as non-white.

Emotional reactions to the various stories differed enormously. The minority narrative generated the most negative responses among white respondents, with nearly 60% reporting reactions that included anger or anxiety (as opposed to hopefulness or enthusiasm). Fully three-fourths of Republicans reported a negative emotion to this story. The bare diversity rising story generated far less distress. Only about a third of whites reacted negatively to this story, and remarkably Republicans were even more positive about it than Democrats. 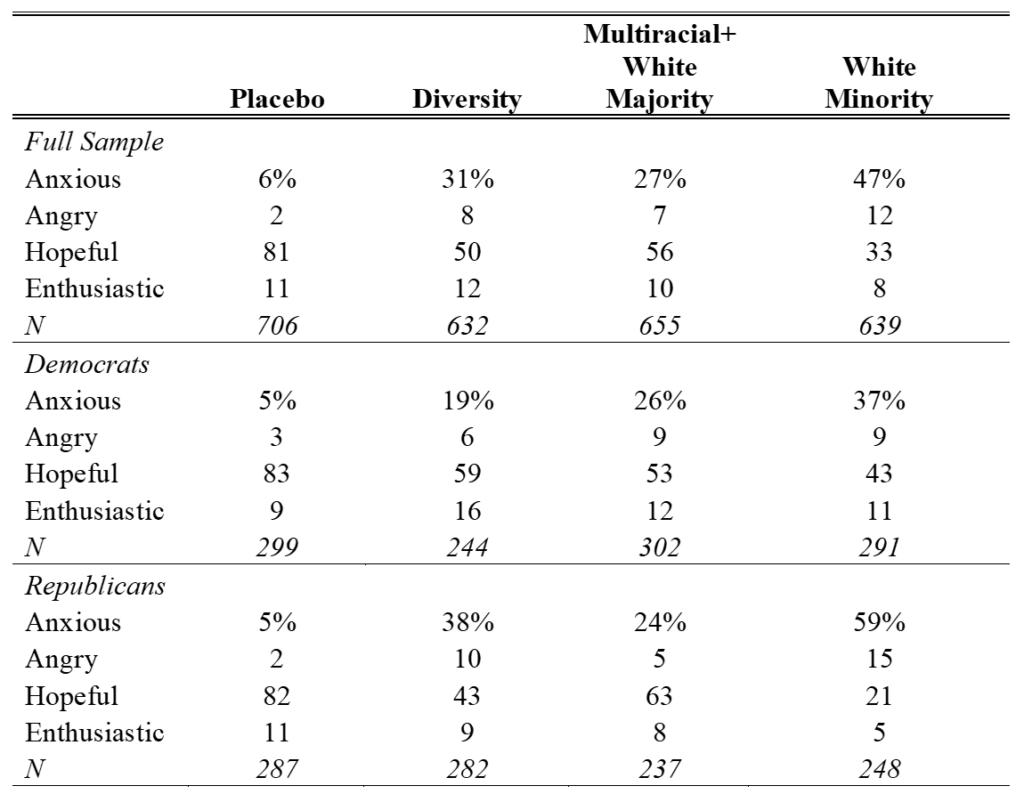 Our second experiment, conducted in January 2019 as a module on the Understanding America panel administered by USC Dornsife’s Center for Economic and Social Research, built on the first in several ways. First, it examined whether the soothing effects of the multiracial+white majority (“blending”) narrative held up even when whites were told about racial mixing without mention of a persistent but broadened white majority.

Second, we tested whether the positive effects of the blending narrative held up even when they are challenged by someone who casts doubt on the idea that mixed-race people really would be seen as white.

One conclusion that stands out from a comparison of responses is that a powerfully positive emotional response to narratives about rising multiracialism exists irrespective of whether they include reference to a persistent white majority.

Second, while a direct challenge to the validity of the blending narrative in the competing story somewhat dampened positive emotions, it failed to undermine the overwhelmingly positive balance of emotional reactions. Rather than simply reverting to pessimism when confronted with an expert’s insistence that the real racial future of America is bifurcation and white decline, people exposed to this two-sided narrative remained far more positive than those exposed to the white minority story in isolation, which is the standard media framing of racial forecasts.

When it comes to fears of anti-white discrimination, the differences in reader responses are every bit as stark. In keeping with previous research, the white minority narrative greatly heightens expectations of rising anti-white discrimination. But, crucially, no other story, even though all refer clearly to rising racial diversity, yields this effect. Threatened reactions are evoked only by the frame emphasizing that whites will fall to a minority in a bifurcated society.

The experimental survey evidence is clear cut. Most white Americans who have reacted with alarm to rising racial diversity are not afraid of diversity per se. They have reacted to the vision of a racially polarized society in which whites lose out to a growing bloc of non-whites. When presented instead with 21st century trends of rising diversity, including an interpretation of growing diversity that accounts for rising rates of mixed-race marriage and multiracial identification, anxiety and anger give way to hope about the future.

No narrative can erase stark past or present racial inequality, the nation’s ongoing struggle with nativism, or the unique challenges that black Americans face. And there are certainly plenty of white Americans who are agitated about ethnic change no matter how it is framed. But far more whites, both Democrat and Republican, find the idea of increased racial mixing and plural identification reassuring.

The good news is that the future of race relations in America is yet to be written. If it is written by responsible opinion leaders, rather than by sensationalists and provocateurs who emphasize a backward-looking bifurcation, the recent tide of backlash can still be turned back. Projections of 21st century racial America should highlight all the changing demographics and incorporate contemporary ideas of racial identity and belonging.