In 2019, our team of researchers at USC’s Center for Economic and Social Research launched the LABarometer, a quarterly, internet-based survey of approximately 1,750 randomly selected L.A. County residents. The survey monitors social conditions in L.A., with a focus on four key issues: livability, mobility, sustainability & resiliency, and affordability & prosperity.

The LABarometer Livability survey assesses neighborhood quality of life in L.A. County, guided by the principle that a livable neighborhood is one in which residents feel happy, healthy, safe, socially connected, and with access to important goods, services and amenities. The LABarometer Mobility survey examines residents’ transportation behaviors, experiences, and attitudes, especially as they relate to county-wide efforts to reduce automobile congestion and increase the use of alternative transportation modes.

Five months after the release of LABarometer’s first Livability survey in 2019, life in Los Angeles (L.A.) County was upended by COVID-19. Rates of infection grew rapidly, businesses closed, unemployment soared, and millions of people were forced to shelter in place for months on end. In these difficult times, the data collection effort of the LA Barometer continued as planned. Our goal was to obtain information on how the pandemic was affecting Angelenos’ lives. Now, with the release of the second waves of our Livability and Mobility surveys, we can take stock of how much life in L.A. has changed since the pandemic began.

The data collected in Wave 2 of our Livability survey (collected between November 9, 2020 and January 7, 2021) and Wave 2 of our Mobility survey (collected between March 2 to April 30, 2021), provide interesting insights into how the pandemic affected various aspects of life in LA county. Here are a few significant takeaways (a more detailed discussion can be found in our LABarometer Livability and Mobility reports):

1. Angelenos perceive less crime, vandalism, and drug and alcohol use in their neighborhoods than they did in 2019.

In Waves 1 and 2 of our Livability survey, we asked residents a series of questions about their neighborhoods, including whether or not social problems like drug and alcohol use, vandalism, crime, and loitering were common. We then restricted our sample to respondents who had participated in both waves and analyzed how their responses in Wave 1 compared to their responses in Wave 2. 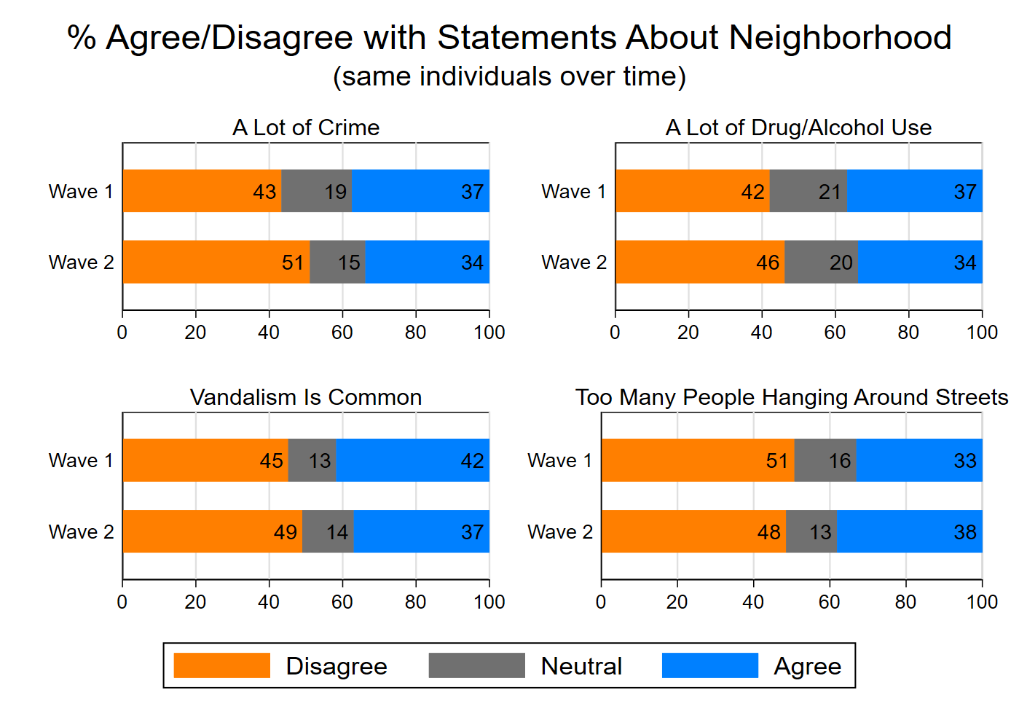 This decline in the perceived prevalence of neighborhood problems is likely at least partly attributable to pandemic-related declines in economic and social activity. Notably, reports of unwanted loitering on streets have increased since Wave 1 – a consequence, perhaps, of the increasing rates of unemployment, housing insecurity, and remote work brought on by the pandemic. Time will tell whether these neighborhood changes are unique to the pandemic or whether they will persist even as residents resume their normal activities.

In Wave 1, 23% of L.A. County residents reported that they planned to move out of their housing in the next year, including 16% who planned to move to new housing somewhere else in L.A. and 7% who planned leave L.A. altogether. In Wave 2, a similar share (24%) reported plans to move out of their housing. However, a significantly higher share (10%) of respondents reported plans to leave L.A. County altogether. 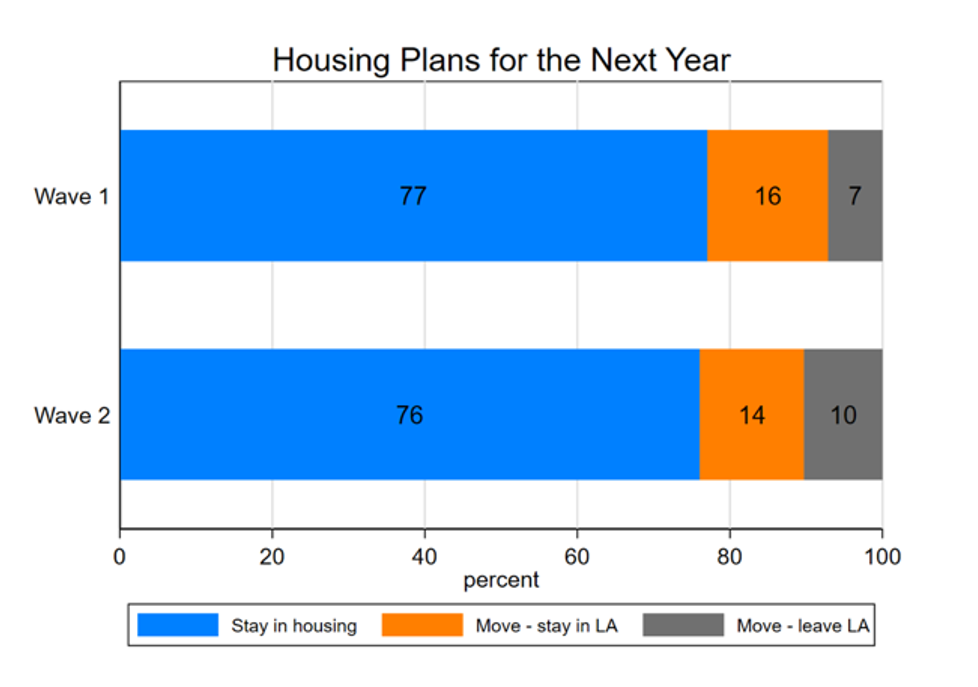 3. Use of public transit and ride-hailing services declined by almost two-thirds in 2020.

According to the results of our latest Mobility Survey, L.A. County residents were 66% less likely to use public transit and 56% less likely to use ride-hailing services in 2020 than they were in 2019. The prevalence of occasional to frequent ride-hailing use dropped from 41% in Wave 1 of the survey to 18% in Wave 2. The prevalence of occasional to frequent public transit use dropped from 36% in Wave 1 to 12% in Wave 2. 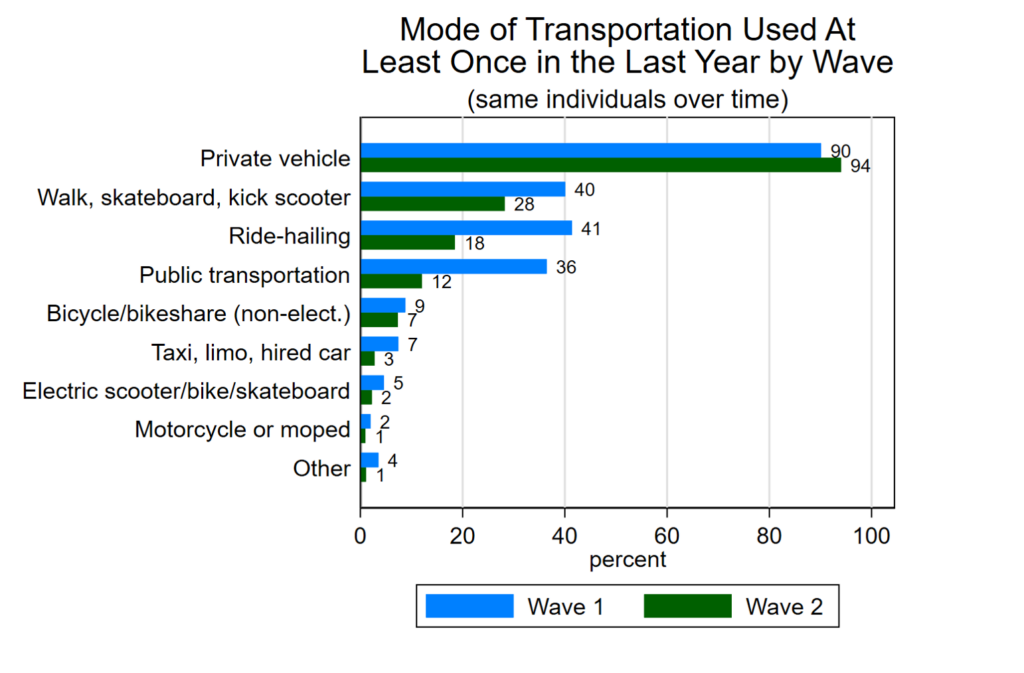 Upon further analysis, we find that the 24 percentage-point drop in public transit use between 2019 and 2020 occurred primarily among residents with a high income and among residents living in the City of L.A., rather than in other parts of L.A. County. Our data also reveal that the 23 percentage-point drop in ride-hailing use occurred primarily among white residents, young or middle-aged residents, and those with a high income or a high level of education. 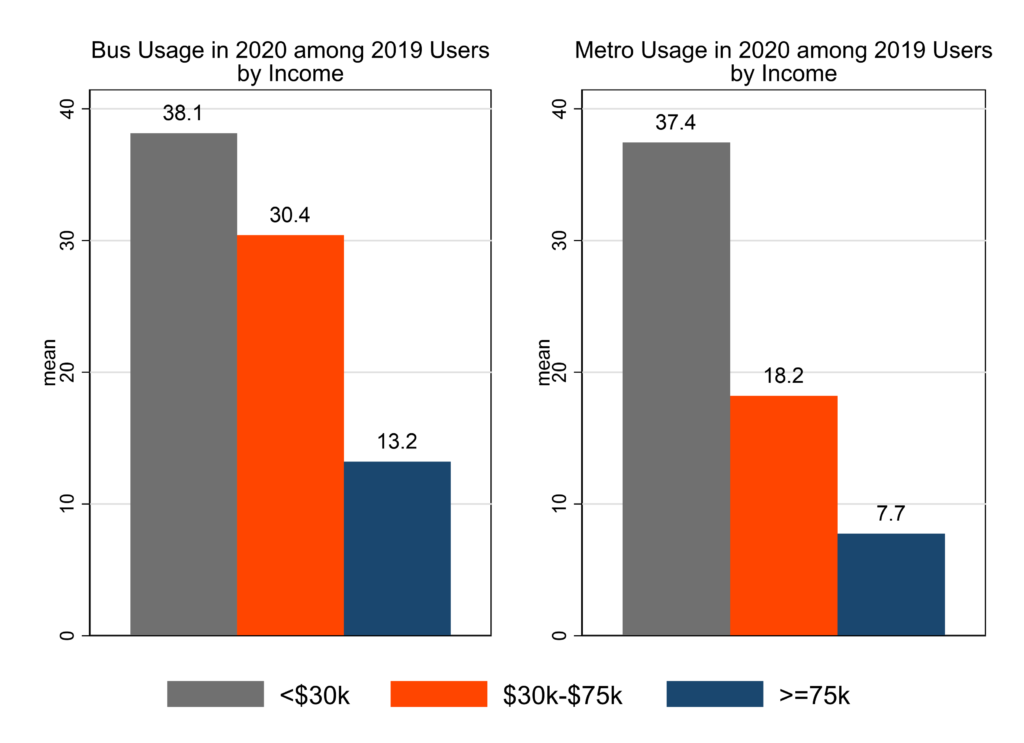 While it continues to evolve, our assessment of the impact of the pandemic in L.A. offers important insights for policy makers. The pandemic appears to have exacerbated the consequences of L.A.’s high cost of living for residents, as an increasing number plan to leave the county. Who will eventually leave remains to be seen, but significant out-migration could transform the composition of L.A.’s population and affect the demand for services offered to residents. Local authorities should be aware of this possibility and plan interventions accordingly.

Furthermore, in a county that has been plagued by traffic issues for decades, the pandemic appears to have adversely impacted residents’ plans to decrease their use of private vehicles and increase their use of public transportation. This is especially striking among high-income residents. While this may be attributed, in part, to the rise of remote work and restrictions on social activity, public transportation also faces a public perception problem even bigger than before.  It may take significant time and effort to get Angelenos back onto buses and trains. City and county officials will need to make public transportation more appealing to different segments of the L.A. population and undo the damages that lockdowns and fear of COVID infection have caused.

For a full set of results and a complete description of our data and methods, please find LABarometer’s Livability Report and Mobility Report online at https://cesr.usc.edu/labarometer/reports_releases.