More and more people are enrolling in health insurance schemes such as high deductible health plans, where the price for a healthcare service varies based on how much the enrollee has already spent during the insurance period. These plans create a complex dynamic decision problem for enrollees. To optimally decide on which healthcare product to purchase, individuals must calculate the expected probability of being in the different regions (e.g., the deductible or insured region) at the end of the insurance period.

In a recent working paper with Christina M. Dalton and Robert Town (Myopia and Complex Dynamic Incentives: Evidence from Medicare Part D, NBER Working Paper #21,104), I provide robust evidence as to whether people act myopically in the choice of prescription drugs. We consider how individuals act near the so-called donut hole, the large coverage gap in Medicare Part D that started at $2,510 in total expenditures for the year of our sample. The presence of the donut hole has received a lot of press and public interest, largely because of its unusual pricing structure, where individuals who have already spent relatively high amount on drugs are uninsured.

We develop a new method for testing for myopia that we believe provides new and robust evidence on this dimension. We consider individuals who already reached $2,000 (near the donut hole) early in the year. We hypothesized (and later checked) that these individuals would end the year inside the coverage gap.

Using a dataset of Part D enrollees from Express Scripts, we create a sample of individuals who reached $2,000 early in the year. We find that these individuals lower their prescription drug usage dramatically upon crossing into the donut hole. In particular, they spend 28% less per week on prescriptions on average than before the donut hole. The graphic below, reproduced from Figure 2 in our paper, shows graphically the mean weekly spending by these individuals as a function of their beginning-of-week cumulative spending. The figure shows that spending is flat from $2,000 – $2,400. It only begins to drop in weeks where the individual reaches the donut hole. 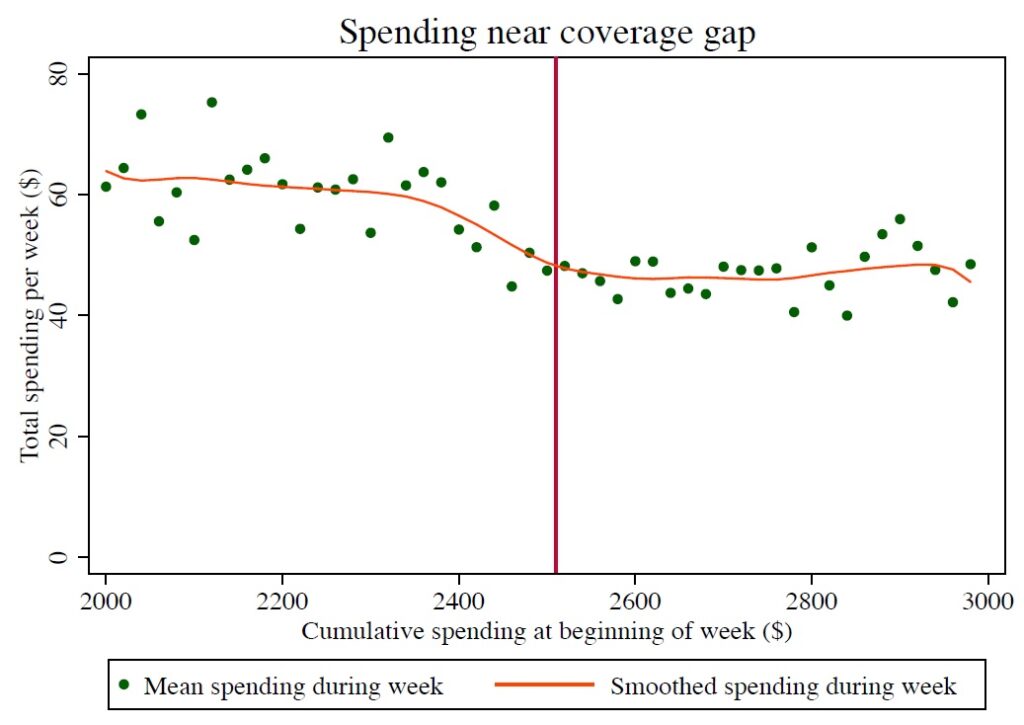 The five largest drug classes in our sample are cholesterol lowering drugs, two types of blood pressure medications (renin-angiotensin system blockers and beta blockers), opioids, and antidepressants. The first three of these medications are almost always for chronic conditions that one would except to be ongoing. Yet, we find that four of these five drug classes account for among the five largest drops in drug spending upon reaching the donut hole. The lone exception is opioids, which are used for pain relief, and which drop by a much lower amount. This suggests that the immediacy might be causing Part D enrollees to not forego opioids, unlike, say blood pressure medications, where not taking them does not lead to any immediate discomfort.

We then use our data, together with state-of-the-art econometric methods, to evaluate the extent to which people are myopic. We find that people are very myopic indeed. A nationally representative sample of rational forward-looking individuals would lower its annual spending 29% relative to the myopic case that we estimate.

What explains our findings? We believe that Medicare Part D enrollees largely do not understand how to optimize their drug purchase decisions in the presence of complex dynamic incentives. We believe that it is not a matter of them not valuing the future, but rather being unaware of how to properly account for it.

Increasingly, legislation and health plans have encouraged patients to have more “skin in the game” in order to lower healthcare cost growth. As we do this, we need to be mindful that we are

increasing the complexity of patient decision making regarding their healthcare choices. The current sets of information, for instance the monthly information that is provided by the Medicare administration to Part D enrollees, may not be sufficient to get people to understand their dynamic economic incentives.

In this vein, my co-author on this project, Bob Town helped found a healthcare company, called Picwell.com, and currently serves as the chief economist of this company. Picwell seeks to help people better pick health plans and make better healthcare choices more generally. If we can get people to make choices that serve their long-run interests better, as Picwell is attempting to help do, everyone will benefit.