Anup Malani will present at the Schaeffer Center as part of the Fall 2018 Seminar Series. 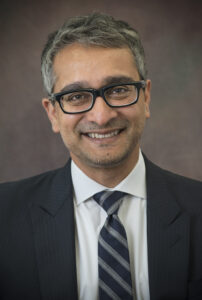 Malani is the co-founder and Faculty Director of the International Innovation Corps, a social service program that sends teams of US and foreign university graduates to work on innovative development projects with government officials in India and Brazil.

Malani has a PhD in economics and a JD, both from University of Chicago. He clerked for Judge Stephen Williams on the U.S. Court of Appeals for District of Columbia and Justice Sandra Day O’Connor on the U.S. Supreme Court.

Malani conducts research in law and economics, health economics and development economics. His law and economics research focuses on blockchain, judicial behavior, and the welfare impacts of legal reforms. His health economics research focuses on the value of medical innovation and health care insurance, control of infectious diseases, placebo effects, and conflicts of interest in medicine. Malani’s development economics work focuses on health care supply and financing in India and the growth of and quality of life in urban slums. Malani is the principal investigator on the Indian Health Insurance Experiment, an 11,000 household randomized controlled trial of health insurance in Karnataka, India, and on a large-scale impact evaluation of Mission Kakatiya, a major effort to expand rainfall capture as means of irrigation in Telangana, India.

Malani’s research has been published in leading journals in a number of different fields, including the Proceedings of the National Academy of Sciences, the Journal of Political Economy, the Journal of Econometrics, the Harvard Law Review, the University of Chicago Law Review, the Archives of Internal Medicine, and Theoretical Population Biology.

Malani teaches courses in commercial law, health law, the canons of American legal thought, law and economics, and law and development in the Law School, a PhD course in law and economics in the Economics Department, a health economics module in the Pritzker School of Medicine, and a public policy course in the Booth School of Business at the University of Chicago.