The pressure to curb U.S. healthcare spending keeps growing, but fear about what that might entail – including rationing of treatments or price controls that could stifle innovation – stops action. Unlike other advanced nations, the United States does not have a coordinated process to evaluate the effectiveness and value of new devices, medicines, or procedures. Could an Institute of Health Technology Assessment facilitate more rational decisions on healthcare that reward both innovation and quality across the entire spectrum of care?

Join the Aspen Institute and the USC Schaeffer Center for a discussion with Gail Wilensky, Peter Neumann, and Darius Lakdawalla – lead authors of a recently released white paper that paves the way for a new approach to health technology assessment in the U.S. Joining the conversation will be Lee A. Fleisher, chief medical officer and director of the Center for Clinical Standards and Quality at CMS and Adrian Towse, director emeritus and senior research fellow at the UK’s Office of Health Economics. The conversations will be moderated by STAT Washington Correspondent Rachel Cohrs. 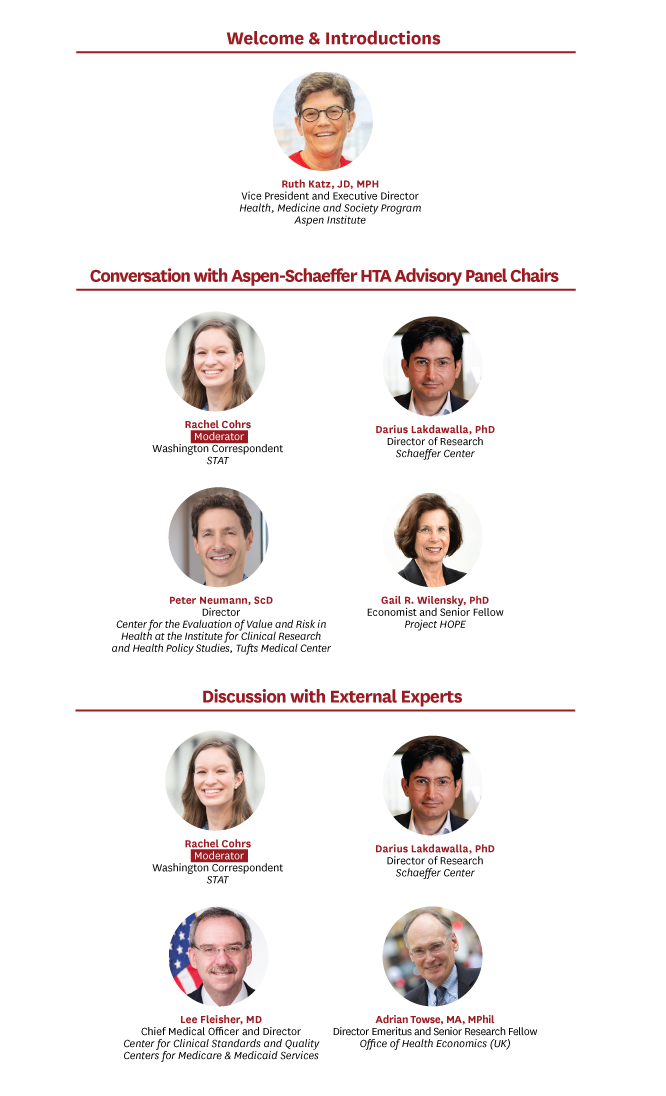 Ruth Katz, JD, MPH, is a Vice President and the Executive Director of the Health, Medicine and Society (HMS) Program at the Aspen Institute, an educational and policy studies organization based in Washington, DC. Drawing on the nation’s sharpest leaders, intellects, and practitioners, HMS seeks out bold, creative, and practical solutions to the health and medicine challenges facing the United States in the 21st century.

Ms. Katz joined the Aspen Institute after serving from 2009 to 2013 as Chief Public Health Counsel (Democratic Staff) with the Committee on Energy and Commerce in the U.S. House of Representatives). The Committee has legislative jurisdiction over virtually every domestic health program, including Medicare, Medicaid, the National Institutes of Health (NIH), the Centers for Disease Control and Prevention (CDC), the Food and Drug Administration, and national health reform efforts. Ms. Katz was the lead Democratic committee staff on the public health components of the health reform initiative passed by the House of Representatives in November 2009. More>

Rachel Cohrs, is a Washington correspondent for STAT, reporting on the intersection of politics and health policy. Specifically, she focuses on how the hospital, pharmaceutical, and health tech industries influence and are influenced by policy developments. She previously covered healthcare policy for Modern Healthcare and prescription drug pricing for Inside Health Policy. Rachel earned a degree in journalism from the University of Southern California.

Darius Lakdawalla, PhD holds the Quintiles Chair in Pharmaceutical Development and Regulatory Innovation at USC, where he sits on the faculties of the USC Schaeffer Center, the USC School of Pharmacy and the USC Price School of Public Policy. He is a widely published, award-winning researcher, and a leading authority in both health economics and health policy.

Peter J. Neumann, ScD, is Director of the Center for the Evaluation of Value and Risk in Health at the Institute for Clinical Research and Health Policy Studies at Tufts Medical Center, and Professor of Medicine at Tufts University School of Medicine. He was on the faculty of the Harvard School of Public Health for ten years, most recently as Associate Professor of Policy and Decision Sciences.  His research focuses on the use of cost-effectiveness analysis in healthcare decision making.  He is the founder and director of the Cost-Effectiveness Registry (www.cearegistry.org), a comprehensive database of cost-effectiveness analyses in healthcare.  Dr. Neumann has contributed to the literature on the use of willingness to pay and quality-adjusted life years (QALYs) in valuing health benefits.  He is the author or co-author of over 150 papers in the medical literature and Using Cost-Effectiveness Analysis to Improve Health Care (Oxford University Press, 2005). Dr. Neumann has served as President of the International Society for Pharmacoeconomics and Outcomes Research (ISPOR).  He received his doctorate in health policy and management from the Harvard University.

Gail R. Wilensky, PhD, joined Project HOPE in 1993. She is an economist and senior fellow at Project HOPE. Prior to joining Project HOPE, Gail directed the Medicare and Medicaid programs and served in the White House as a senior adviser on health and welfare issues to President George H.W. Bush. She was also the first chair of the Medicare Payment Advisory Commission. Her expertise is on strategies to reform healthcare in the United States, with particular emphasis on Medicare, comparative effectiveness research and military healthcare.

Gail testifies frequently before Congressional committees, serves as an adviser to members of Congress and other elected officials and speaks nationally and internationally. She received a bachelor’s degree in psychology and a PhD in economics from the University of Michigan.

Lee received his medical degree from the State University of New York at Stony Brook, from which he received the Distinguished Alumni Award in 2011. His research focuses on perioperative cardiovascular risk assessment and reduction, measurement of quality of care, decision making, implementation of cultural change and health policy. He has received numerous federal, industry and foundation grants related to these subjects and has published 175+ original articles, over 200 editorials, reviews and book chapters, and 9 books and collaborates with anthropologists, sociologists, as well as faculty from law, business and nursing.

He was Treasurer of the Board of Directors and Chair of the Finance Committee of the National Quality Forum. He was a member of the Care Transformation Forum (CTF) of the Health Care Payment Learning and Action Network (LAN) He is currently an Affiliated Faculty of the Quattrone Center for the Fair Administration of Justice and pursuing a Master in Law at the University of Pennsylvania Carey Law School. His is a Senior Fellow of the Leonard Davis Institute of Health Economics. In 2007, he was elected to membership of the National Academy of Medicine (formerly Institute of Medicine) of the National Academy of Sciences and served on Committees of the NAM.

Adrian Towse, MA, MPhil, is Director Emeritus of the Office of Health Economics in the UK. Adrian’s current research includes incentives for new drugs and vaccines to tackle Antimicrobial Resistance, the use of 'risk-sharing' arrangements between healthcare payers and pharmaceutical companies, including value-based pricing approaches; the economics of precision or stratified medicine for healthcare payers and the pharmaceutical industry; and economic issues that affect both R&D for and access to treatments for diseases prevalent in low and middle income countries.

A Senior Visiting Fellow at the Health Economics Research Centre, Nuffield Department of Population Health, at the University of Oxford, Adrian also has been a Visiting Professor at the London School of Economics and a Visiting Professor at the University of York. For ten years, he served as a Non-Executive Director of the Oxford University Hospitals NHS Trust, one of the UK’s largest hospital groups. Adrian was President of the International Society for Pharmacoeconomics and Outcomes Research (ISPOR) for the 2014-15 term.