Legalizing cannabis was supposed to undercut drug cartels and ensure a well-regulated market for what was once known as the devil’s weed. But in the years since the industry was legalized in certain states, there has been growing concern about corruption, crime, environmental degradation and allegations of labor abuse. Furthermore, an explosion of high-potency products, from vapes to gummies to ice cream, is raising health concerns. Please join our panel of distinguished experts as they debate how to better regulate this new market so that consumers are protected and the industry operates on the up-and-up.

This event is co-hosted by the USC Sol Price School of Public Policy and the USC Schaeffer Center for Health Policy & Economics. 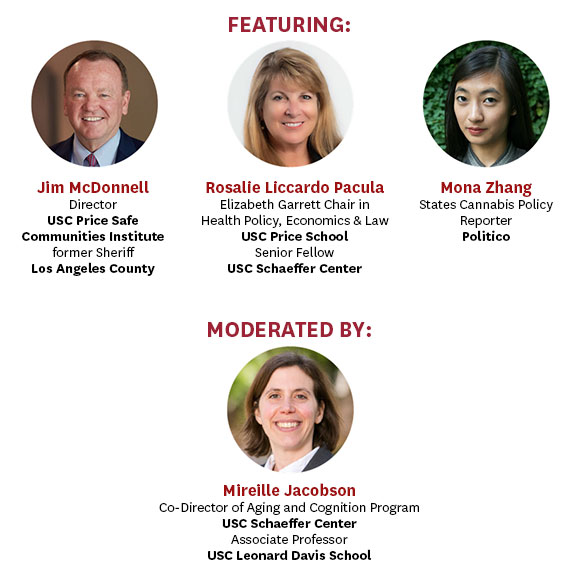 McDonnell began his career with the LAPD, where he served for 29 years and held every rank up to first assistant chief of police. He worked a wide variety of assignments, including homicide, gangs, organized crime, vice and patrol operations. Early in his tenure there, he played an integral role in developing the framework for community policing that would make the LAPD a thought leader in community policing strategies. He retired from the LAPD in 2010 to become chief of the Long Beach Police Department, where he served for almost five years.

In 2014, McDonnell was elected as the 32nd sheriff of Los Angeles County, putting him in charge of the largest sheriff’s department in the U.S. with more than 18,000 employees and an annual budget of roughly $3.3 billion. Before his arrival, the agency had been shaken by scandal and, during his four-year term, he was able to restore public trust, institutionalize systems of accountability and work effectively with federal, state and local agencies to combat human trafficking and terrorism, among other regional challenges.

As sheriff, he also inherited the nation’s largest jail system, which had come under a federal consent decree due to a pattern or practice of inadequate mental health care and excessive force in violation of inmates’ civil rights. His administration was able to restore a culture of professionalism and respect, thereby substantially changing it to one considered a model for large jail systems.

McDonnell has close ties to the USC Price School, where he earned a master’s degree in public administration and serves as a member of the school’s Board of Councilors. He previously obtained a bachelor’s degree in criminal justice from St. Anselm College in Manchester, New Hampshire. He’s also a graduate of the FBI’s National Executive Institute and has completed executive education programs at Harvard’s Kennedy School of Government.

Rosalie Liccardo Pacula, PhD, holds the Elizabeth Garrett Chair in Health Policy, Economics & Law at the Sol Price School of Public Policy, University of Southern California and is a Senior Fellow with the Leonard D. Schaeffer Center for Health Policy & Economics, where she co-directs the RAND-USC Schaeffer Opioid Policy Tools & Information Center of Excellence (OPTIC) in addition to leading numerous National Institute of Health funded studies examining the impact of federal, state and local laws on the supply, demand and access to treatment for intoxicating substances.  Previously she spent 21 years at the RAND Corporation, serving as co-director of RAND’s Drug Policy Research Center for 15 of those years, working on drug policy studies for the U.S. Office of National Drug Control Policy, U.S. Centers for Disease Control and Prevention, European Commission, and the U.K. Home Office.  She served on NIDA’s National Advisory Council Cannabis Policy Workgroup (2017), the Substance Abuse and Mental Health Services Administration (SAMHSA’s) technical advisory committee on preventing cannabis use among youth (2020-present), the World Health Organization’s Technical Expert Committee on Cannabis Use and Cannabis Policy (December 2019-2020), the National Academy of Sciences, Engineering and Medicine Committee on the Review of Specific Programs in the Comprehensive Addiction and Recovery Act (2021 – present), the CDC’s National Injury Prevention’s Board of Scholarly Counsellors (2021- present), and is currently President of the International Society for the Study of Drug Policy (2019- present).  Dr. Pacula is a graduate from the Santa Clara University and received her doctorate in economics from Duke University.

Mona Zhang is the states cannabis policy reporter for POLITICO Pro. Previously, she was the founder and editor of the cannabis newsletter Word on the Tree. She also spent four years covering the cannabis beat as a freelance journalist for Forbes, The Outline, High Times and more. Before that, she served as Social Editor for Adweek and worked in various roles for Mediabistro.

Mireille Jacobson, PhD (Moderator), is an applied micro-economist with a diverse portfolio of research united by an interest in understanding how health care policies affect well-being. Much of her work focuses on the supply-side of health care markets, analyzing (i) the effects of direct supply changes (e.g., hospital closures) on access to care and (ii) the impact of reimbursement policy on treatment and outcomes, specifically in the oncology market. Other work focuses on the demand side, assessing the risk-protective value of health insurance for consumers. Her current projects include analyses of (i) tradeoffs in covering near poor households with public insurance versus subsidies for the purchase of private health insurance, (ii) the impact of a transitional care pain management model on readmissions and health outcomes for opioid tolerant patients, and (iii) the anticipatory effects of gaining Medicare on the mental health of seniors. In addition to being an Associate Professor in the Davis School of Gerontology, she is the co-director of the program on aging at USC’s Leonard D. Schaeffer Center for Health Policy & Economics and a research associate in the Health Care Program at the National Bureau of Economic Research.  Dr. Jacobson holds a PhD (2001) and MA (1998) in Economics from Harvard University and was a NIMH Post-Doctoral Fellow at the Harvard Medical School in 2001-2002.

Register Now The event you will register for is named Avoiding Cannabis Chaos: Better Policies and Strategies for a Legal Market