A series of articles published this year in JAMA Internal Medicine has substantially added to the empirical literature showing that access to and use of primary care medicine in the US is associated with higher value care and better health outcomes than care that is more specialist-oriented. While these studies confirm our view that the number of primary care physicians should be increased (and likely with such an increase, a decrease in the overall numbers of specialists), one study predicted that this imbalance is likely to worsen in the future rather than improve.

More recently, the Secretary of Health and Human Services announced a new “Primary Cares” initiative to promote primary care in the Medicare program. The press release for this initiative stated, “Empirical evidence shows that primary care is associated with higher quality, better outcomes, and lower costs within and across major population subgroups.” The initiative is intended to attract over 25 percent of all Medicare fee-for-service beneficiaries in five separate primary care payment models that will be launched beginning in January 2020.

In a Brookings white paper we published in December 2018, we came to the following principal conclusions: First, the income gap between the earnings of PCPs and specialists is the major driver of physicians’ choice between these groups of specialties and the main reason why physicians in training tend to favor specialization over primary care. Second, Medicare’s system of paying physicians for services furnished to Medicare beneficiaries, and its emulation by other payers, is a major contributor to the income gap. Based on these observations, we recommended two complementary measures to improve the mix of PCPs and specialists by reducing the income gap – that Medicare should change the Physician Fee Schedule (PFS) and its method of updating to channel more income to PCPs and less to specialists,[1] and that the US should develop a loan forgiveness program for physicians who practice primary care.

It may not be obvious how both changes in the Medicare PFS and loan forgiveness would lower the PCP/specialist income gap. Raising Medicare fees for services furnished by PCPs and lowering fees for services provided by specialists would alter PCP and specialist revenues in a manner that would reduce the gap. Loan forgiveness available only to PCPs would raise the discounted present value of lifetime earnings of PCPs relative to specialists, which would be another way of reducing the income gap. These measures are complementary because loan forgiveness operates at the early stage of medical training and practice, while PFS changes have their greatest effect as physicians’ fee-for-service practices mature.

Neither of these ideas is particularly new but, in our view, their potential power to improve US healthcare is underappreciated and obscured by numerous views of the problem that distract policymakers from arriving at the right conclusions. Here are five common beliefs that share that defect:

Anecdotal evidence suggests that there is some stigma attached to primary care by medical students as they contemplate what residencies to seek as they approach graduation. No doubt, if true, this could be partially due to students’ perceptions of value associated with future earnings in different specialties. But imagine the signal that would be sent by the availability of loan forgiveness for those willing to enter primary care. In addition to the effect of loan forgiveness for PCPs on the income gap, we would expect medical school students’ perceptions of primary care to improve due to the implied social value of a major subsidy program of this nature.

A loan forgiveness program would have the advantage of an immediate effect on students’ choice of specialty, while changes in the Medicare PFS might take more time to influence specialty choice. Nevertheless, we believe the recent evidence cited above lends some additional urgency to the need to implement major Medicare payment changes, and we hope that policymakers will act accordingly. Our approach is straightforward – implement changes to Medicare and other policies to reduce the gap between primary care and specialist incomes, and the resulting improvement in the PCP/specialist imbalance will accrue both financial and patient care benefits to our health care delivery system.

Illustrative estimates of the benefits of raising the PCP/specialist proportion

If measures were adopted that would reduce the PCP/specialist income gap, what would society reap in return? To answer this question, we rely on data from several cross sectional studies with different designs spanning several decades.[3] We present several figures that illustrate what might happen if cross-sectional  research findings were used to provide a reasonable approximation of what we regard as the true causal relationships  related to PCPs’ and specialists’ effects on US health care. We present estimates of two kinds: first are estimates of the effects of reductions in the income gap of various amounts on the PCP/specialist proportion; second are estimates of the effects of increasing the PCP/specialist proportion on spending and health outcomes.

The effect of a reduction in the income gap on the proportion of physicians who practice primary care.

Assuming an average income gap of approximately $104,000 and the estimated responsiveness to a gap reduction reported in our white paper, a one percent reduction in the gap of $1040 would raise the PCP proportion, currently at 32 percent, by approximately one percentage point over a long period of time (see Figure 1).[4] Additionally, assuming a working lifetime of 35 years [5] and an immediate response of new entrants to medicine (i.e., doctors in training selecting residencies and those in internal medicine and other primary care residencies deciding to remain in primary care), achieving a one percentage point increase in the PGP proportion in ten years would require a reduction in the income gap of $3640.[6] Note that the PCP/specialist proportion is affected both by the mix of PCPs and specialists entering medical practice and by the mix leaving medical practice upon retirement. Achieving an increase in the proportion to 40 percent, the level recommended by COGME, in ten years would require a decrease in the gap of approximately $29,120.[7]

As we acknowledged in our white paper, there are many reasons why physicians select their fields of practice other than income. Some will prefer primary care regardless of continuation of the status quo and others who are attracted to the performance of procedures will not be persuaded to enter primary care even if the income gap is substantially reduced. Nevertheless, within the “relevant range” of the current and recommended PCP proportions, we believe that reductions in the income gap will effectively increase the PCP proportion over a number of years. We admit that it is hard to predict how long it would take to achieve a large change in the proportion of physicians practicing primary care in the US. 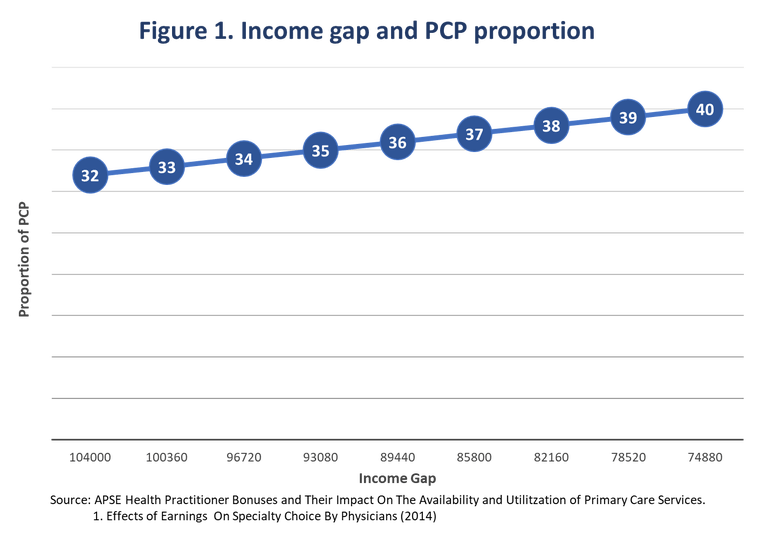 The effects of increasing the PCP proportion on health care spending.

Baiker and Chandra (2004) examines the effect of changing the number of PCP per 10,000 population on Medicare spending, while holding the total number of the physician workforce constant. They calculate Medicare reimbursement per beneficiary at the state level while adjusting for inflation, state-specific cost-of-living, and age, sex, and race of the states’ Medicare population. We apply estimates from Baicker and Chandra and convert PCP per 10,000 to PCP proportion by calculating the number of PCP per 10,000 needed to achieve a percentage point increase in PCP proportion in 2017. Medicare spending reduction was adjusted to 2017 dollars by using the Personal Consumption Expenditure Price Index (PCEPI).

Figure 2 illustrates the effects of increasing the PCP proportion on fee-for-service Medicare spending per beneficiary (Baicker and Chandra’s estimates were based on FFS Medicare payment data). Taking those estimates as causal, a one percentage point increase in the PCP/specialist proportion would reduce the FFS per capita spending by approximately $343 over a long period, and a higher increase in the PCP proportion would be associated with much greater savings. 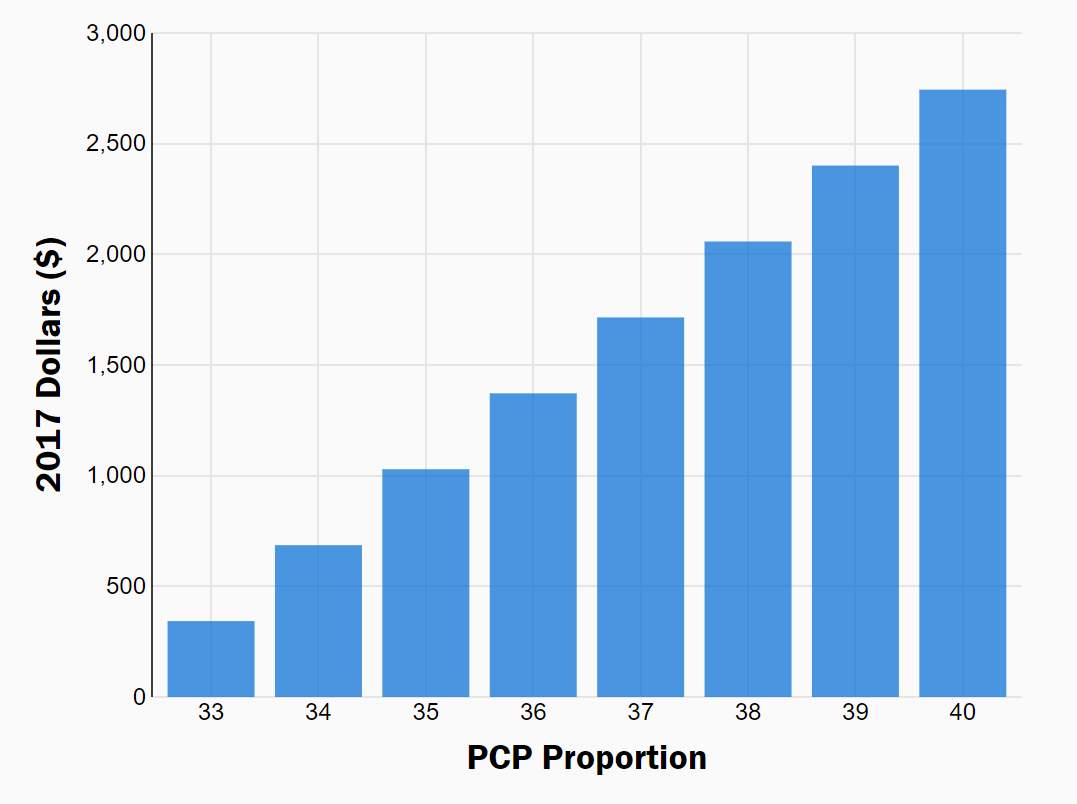 The effects of raising the PCP proportion on life expectancy and other outcome measures. 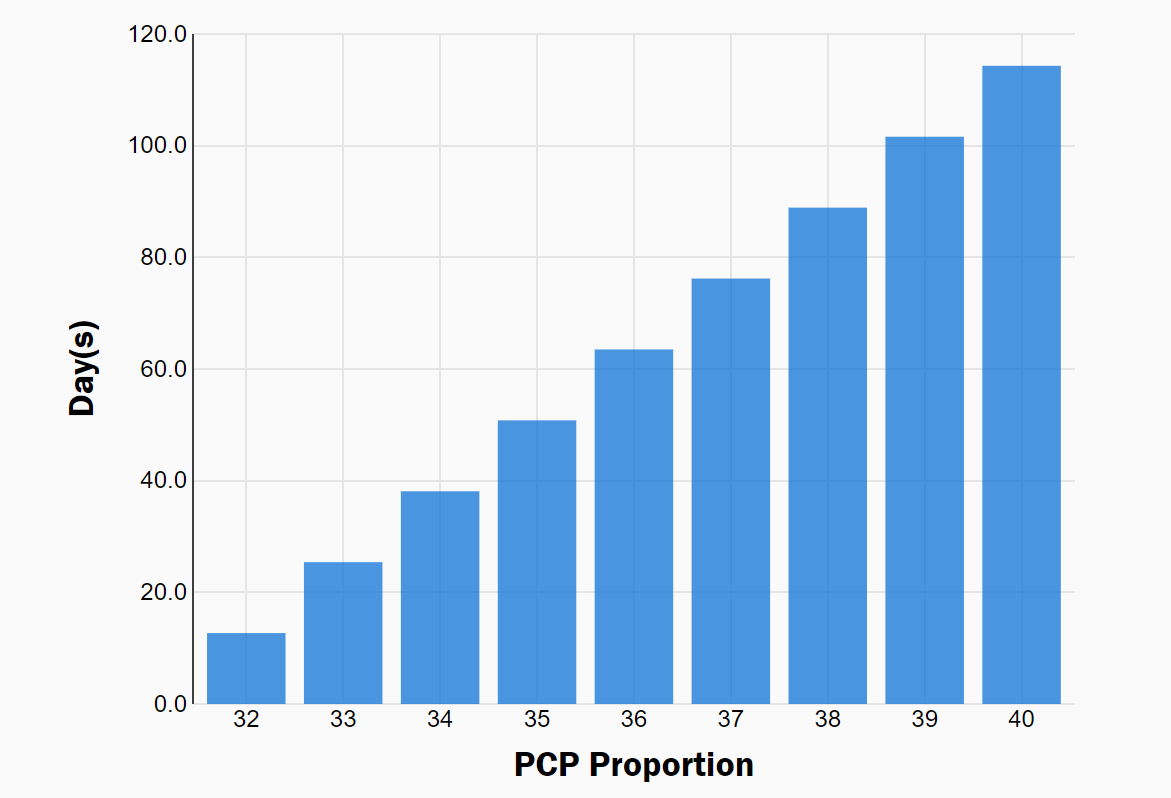 In the same issue as Basu et al, Levine et al published data on the association between primary care and the value and patient experience of care received. They found that patients receiving primary care had significantly higher-value care on average and better health care access and experiences than those without primary care. They concluded that, “Policymakers and health system leaders seeking to improve value should consider increasing investments in primary care.”

All signals point in the same direction – we need to increase the proportion of physicians in the US who place patients and their comprehensive needs at the center while simultaneously allowing them to practice primary care with reduced pressures of income/financing. Medicare has contributed to the current imbalance by paying specialists too much and PCPs too little. This phenomenon, combined with its emulation by other payers, has increased the income gap between PCPs and specialists. While CMS’ new Primary Cares initiative may ameliorate the problem somewhat, an overhaul of the PFS to more appropriately match payment rates to the value produced by particular services would help enormously. That improvement in the Medicare fee schedule, combined with a loan forgiveness program for PCPs, would reduce the gap enough to encourage substantially more physicians in training to choose to practice in primary care. In our view, the evidence shows that raising the PCP proportion would yield such substantial benefits in both health and savings that failure to do so would be a lost opportunity with major consequences.

The authors did not receive any financial support from any firm or person for this article or from any firm or person any views or positions expressed or advocated in this article. Bruce Steinwald and Kavita Patel are committee members for the Physician-Focused Payment Model Technical Advisory Committee at the Department of Health and Human Services. However, the views and positions expressed in this article are solely those of the authors and should not be attributed to any other person or organization.

[1] See Berenson and Ginsburg (2019) for a current discussion of ways to improve the Medicare PFS. The CMS Primary Cares initiative, by providing monthly payments for care coordination and related services, would also channel more Medicare income to PCPs participating in the Medicare program. CMS stated that the program could increase PCP Medicare incomes by as much as 50 percent.

[2]This would also benefit physicians in other “cognitive” specialties, such as infectious disease and neurology, who have also been disadvantaged by the way the MFS RVUs have been established and updated.

[3]Cross-sectional research findings should be interpreted with caution when attempting to estimate causal relationships. This is a common problem in policy analysis wherein one seldom has ideal data and analysis to investigate important policy issues. For example, Baicker and Chandra (2002), whose research findings we rely on heavily in our estimates of the effects of changing the PCP/specialist ratio, acknowledged this issue and performed a number of secondary analyses to minimize the risk of bias in their findings.

[6]We assume that the gap reduction only affects the decisions of doctors in training (medical students and residents), not those already in practice. Therefore, it will take several years for the gap effect to change the PCP proportion significantly. We chose to illustrate the effect over 10 years, the period of time used by the Congressional Budget Office to estimate the budgetary impact of legislative proposals. Based on these assumptions, a change in the income gap will realize approximately 10/35 of its full effect in ten years.

[8] We assume, as we did in our white paper, that other payers will emulate Medicare in setting relative fees for PCP and specialist services, and loan forgiveness operates independently of the mix of payers for physicians’ services.