When the last baby boomers sign up for Medicare in 2030, they’ll have long lives ahead. A man 65 likely will live 18.3 more years and a woman 65 another 21.7 years.  Unfortunately, there’s a downside.

We’ll be living longer but spending more time with disability

“We’ll be living longer but spending more time with disability,” said Dana Goldman, director of the USC Schaeffer Center for Health Policy and Economics, at the June 5 “Strengthening Medicare for 2030” forum in Washington, D.C.

In just 15 years, 67 million people – one in five Americans – will be 65 and older. The forum, cosponsored by the Schaeffer Center and the Brookings Institution, a Washington-based think tank, kicked off a joint effort aimed at helping policymakers plan and modernize Medicare to meet impending challenges.

The half-day session brought together a distinguished list of economists and former administrators of the Centers for Medicare and Medicaid Services (CMS) and its predecessor, the Health Care Financing Administration (HCFA), to focus on some of Medicare’s thorniest issues, including the wealth and poverty of beneficiaries, choice and competition among plans, program design and provider payment reform. 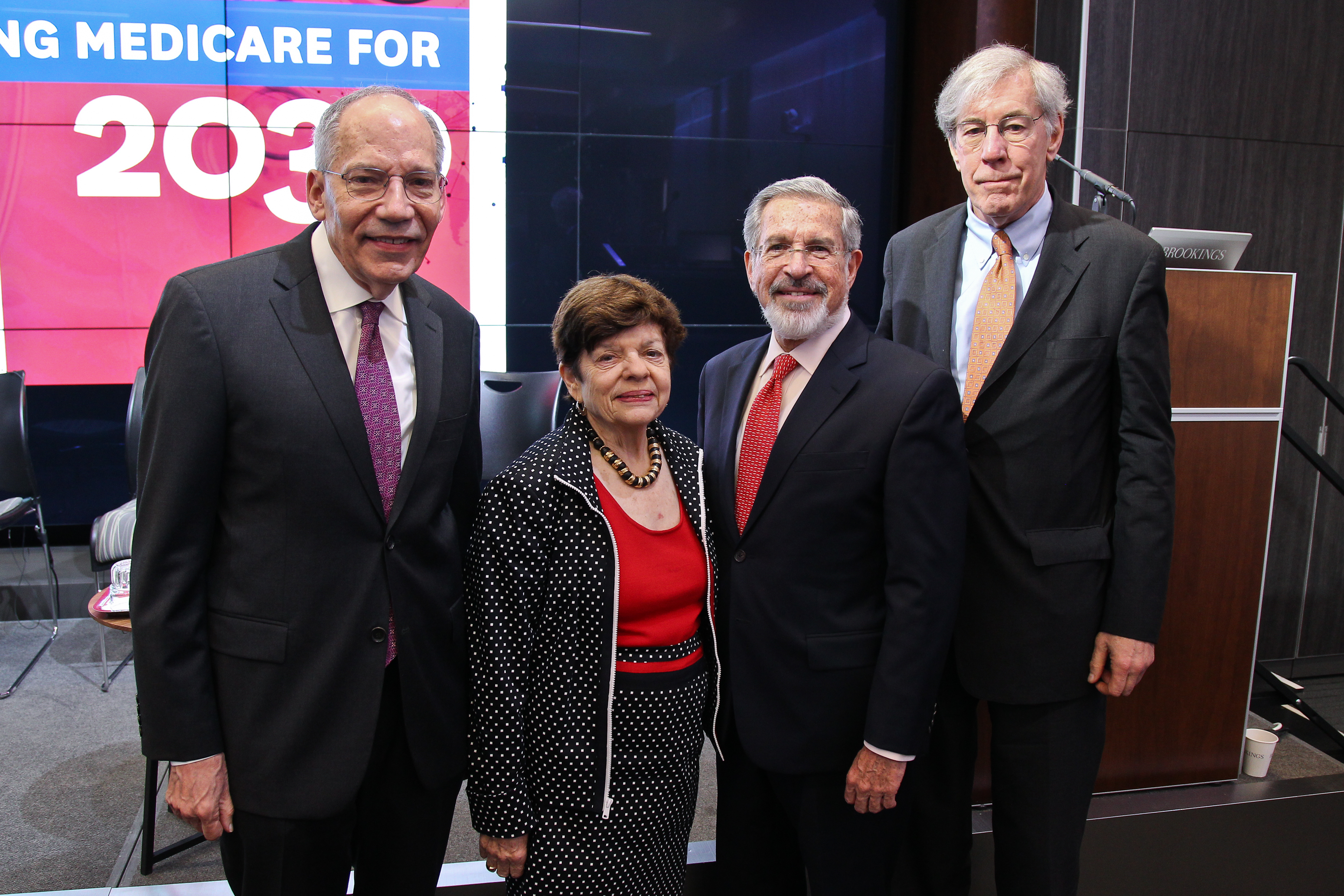 “I’ve been concerned for quite some time that health care costs are driving our accumulated deficit and have the potential to negatively impact  our economy and our national security,” said Leonard D. Schaeffer, who in 2009 established the USC center that bears his name.

Schaeffer, who holds the Judge Robert Maclay Widney Chair at USC, was an administrator of HCFA and was responsible for the federal Medicare and Medicaid programs from 1978 to 1980.

Schaeffer noted that when he joined the agency, “We were concerned already about how to ensure that Medicare was both well-managed and that we were able to control costs.”

There also was a dawning realization in the late 1970s of the ability to collect and integrate health data, he said.

“What we didn’t anticipate was resistance to turning that data into information that could be used to improve medical practice and inform health care policy,” said Schaeffer, who is a member of the boards of trustees at both USC and Brookings. 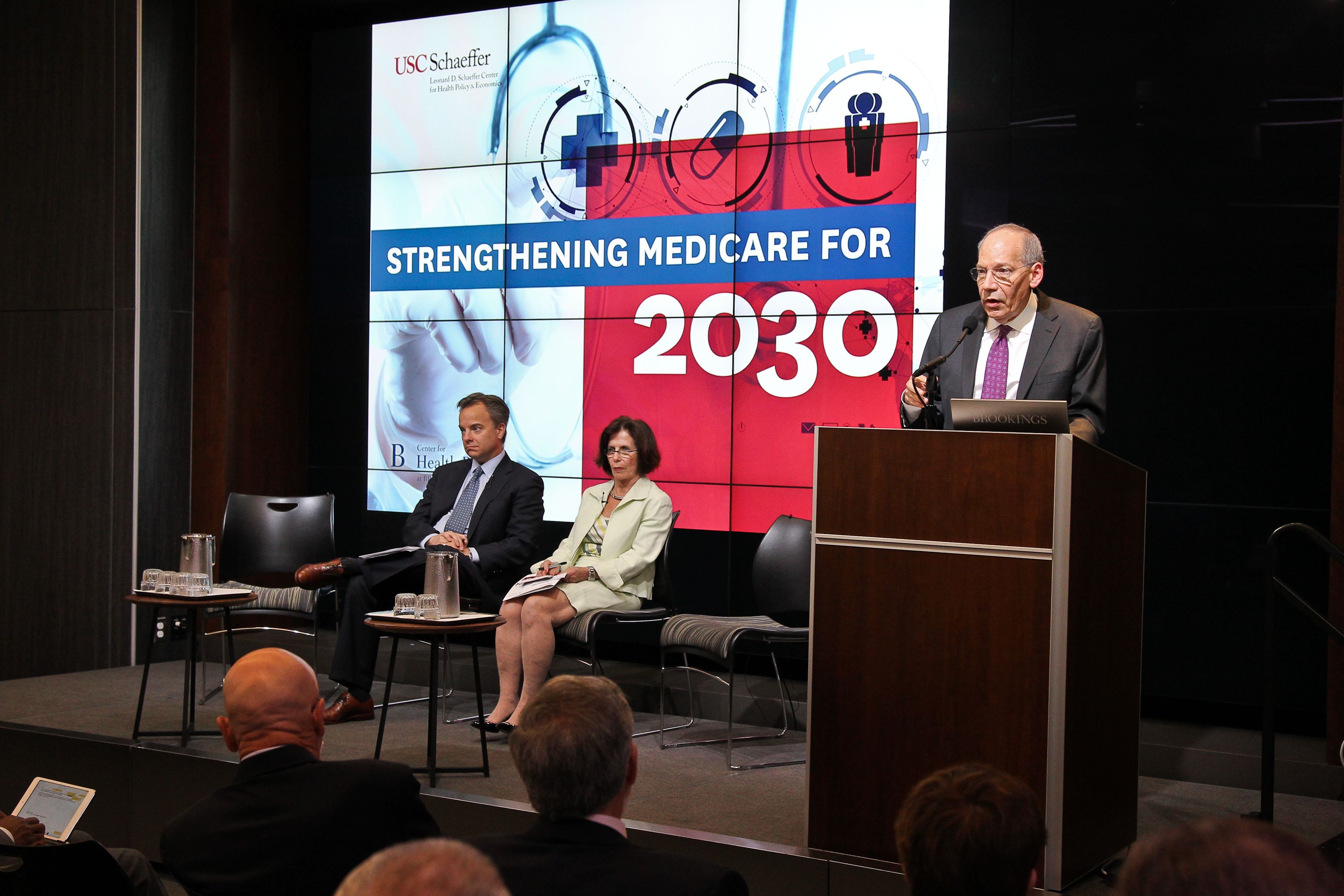 Trending in the Wrong Direction

By almost every measure, Medicare has been a great success, but 50 years after President Lyndon B. Johnson signed Medicare into law, some health trends are heading in the wrong direction.

In 2030, a man and woman age 65 can expect to spend 7.4 and 9.8 years, respectively, with a disability, Goldman explained. Disability is defined as having one or more limitation in activities of daily living, such as being unable to take medications, bathe or dress.

Not only will more people be disabled for a longer time, they’ll also face slightly fewer healthy months of life than 65-year-olds did in 2010. A larger number of Medicare beneficiaries in 2030 will have more chronic conditions – such as hypertension, diabetes and heart disease – than beneficiaries did in 2010, Goldman said.

Researchers at USC used the Future Elderly Model (FEM), a simulation model that Goldman and his colleagues developed, to create the snapshot of changing demographics and spending for Medicare from 2010 and 2030. FEM is the centerpiece effort of the USC Roybal Center for Health Policy Simulation. Researchers also use the FEM to analyze the declining progressivity of Medicare, that is, the degree to which higher-income people get more benefit from Medicare than do lower-income people.

Such projections “are raising warning flags,” said Goldman.  “The goal for public policy and for our health care spending isn’t just to increase life expectancy” but to increase years of healthy life for all.

Medicare traditionally has focused on battling diseases such as cancer and heart disease. The FEM is helping predict how medical breakthroughs to delay aging might affect Medicare spending.

The Medicare price tag in 2030 is projected to be $1.2 trillion annually (in constant 2009 dollars), more than twice what it was in 2010. Advances in medical technology and pharmaceuticals could either exacerbate or alleviate trend to ever-higher costs, he said.

One area of agreement in the politically fraught world of Medicare policy is the need for payment reform. There’s widespread enthusiasm for reforming the way Medicare providers are paid because it could help reduce costs and improve care, said USC’s Ginsburg, who is also a non-resident fellow at Brookings and who presented a paper on payment reform with Wilensky.

“Whether [reform] will succeed depends on how it’s implemented,” he said. “Payment models need to be improved and elements of compulsion need to be employed, such as selective mandates and incentives, so that more suitable benchmarks can be used.”

After the forum, Goldman said he had heard “probably a dozen interesting policy initiatives to help Medicare – now we just need the political will.”