Seth Seabury, associate professor at the USC Schaeffer Center and the Keck School of Medicine at USC, recently presented an analysis of the economic burden of serious mental illness and unmet patient need in the US overall and in Illinois specifically. The event was for stakeholders who are exploring state-specific policy reforms as part of the National Council’s Behavioral Health and Economics Network (BHECON).

“Providing access to high-quality medical care to patients with mental and behavioral disorders is one of the most important challenges in U.S. healthcare today,” Seabury said.  “Yet, helping individuals with mental illness requires a comprehensive strategy specific to the local challenges. This project focuses on finding evidence-driven policy solutions that work for each state.”

BHECON, established in August 2016, aims to build upon the passage of the Excellence in Mental Health Act of 2014, by uniting diverse stakeholders to identify, examine, and advance policy reforms to strengthen states’ mental health delivery systems. Over the coming months, the initiative will be convening forums in multiple states across the country including Illinois, Connecticut, Massachusetts, Missouri and Pennsylvania.

Seabury is Director of the recently founded Keck-Schaeffer Initiative for Population Health Policy which aims to combine empirical, multidisciplinary and data-driven research with clinical insight to develop high value strategies to improve the health of vulnerable populations.  A collaboration between the USC Schaeffer Center, the USC Roski Eye Institute and the Department of Emergency Medicine at the Keck School of Medicine at USC, the initiative is built on the idea that new, innovative collaborations can be leveraged to improve population health.

“Addressing society’s most difficult health problems, such as quality mental health care, requires an interdisciplinary approach making USC a unique partner in tackling this issue,” says Rohit Varma, MD, MPH, dean of the Keck School of Medicine of USC. “The collaborative power of the renowned USC Schaeffer Center on Health Policy & Economics combined with the world’s most innovative medical and scientific research minds at USC’s Keck School of Medicine can bring sound, successful solutions to address this difficult and multifaceted problem.”

Mental Health Conditions Are Common in the US

It is estimated that 10.4 percent of the U.S. population has experienced serious psychological distress (SPD) in the past year. In Illinois, Seabury and his colleagues estimate that more than 1 million people experienced a serious mental illness, which includes conditions like major depressive disorder, bipolar disorder, and schizophrenia, in 2015. 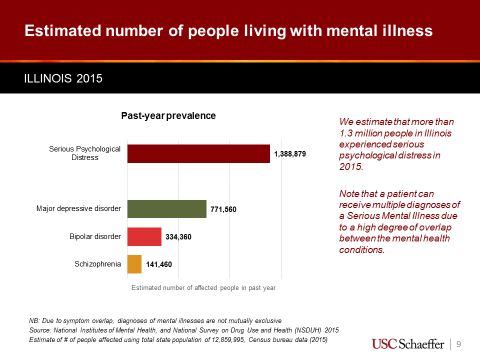 Compared to the United States, Illinois has a relatively high number of hospital beds and primary care physicians per capita. However, Seabury noted, the number of mental health care providers in the state is currently not sufficient to serve the population with mental health needs.

Unmet mental health care need is a national problem: among people who experienced SPD in the past year, over a quarter of them reported an unmet need for mental health care and almost half of these individuals reported they did not receive treatment because they could not afford it. This is despite recent expansions in access to health care due to the ACA. 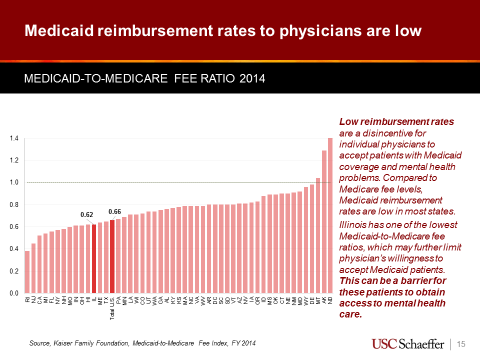 In total, the economic burden is estimated to be over $125 billion dollars for each of the 3 most common serious mental illnesses (major depressive disorder, bipolar disorder, and schizophrenia) per year in the United States.

As policymakers assess new proposals to improve mental health treatment and access, understanding the population effected, the coverage gaps, and the overall economic burden is integral to developing sustainable solutions that meet the need.

View the entire Illinois chart book here.  Chart books that quantify the cost of mental illness in other states will be available in the coming months here.