Inefficiencies and flaws in the American healthcare system are so dramatically highlighted by the coronavirus pandemic that public anger may force changes that lobbyists in Washington will not be able to block, according to Professor Sir Angus Deaton, a Nobel Laureate and Distinguished Fellow at the USC Schaeffer Center for Health Policy & Economics, and Princeton Professor Anne Case. 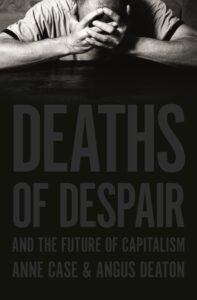 Deaton and Case discussed healthcare trends in the context of their latest book, Deaths of Despair and the Future of American Capitalism, during a Schaeffer Center webinar on July 7 which was watched by over 1,000 people. The session was hosted by Dana Goldman, director of the Schaeffer Center and interim dean of the Price School of Public Policy at USC.

Deaton noted that the virus is putting extraordinary pressures on the healthcare system. He said that it is possible that 1 million Americans will have to spend time in the hospital. Worse, it may take 1 million deaths to achieve herd immunity. At the same time, 27 million Americans may have lost their employer-based health insurance, and face big out of pocket costs through COBRA or Affordable Care Act alternatives.

“This is not a good time for employer-based health insurance,” he said. National health plans in other countries are not facing the same dilemma, he said. Many different plans might work in the United States but in the end “we need to get away from this monstrous system” which costs 18% of American gross domestic product, leaving less and less for education and other social needs.

The widespread health and economic toll of the coronavirus is a recipe for mass public anger, especially given the constraints of the current system. He noted that the pharmaceutical industry has a chance to come out looking good if it develops safe and effective treatments and vaccines, but only if the prices are seen as reasonable and in the public interest. This moment, he said, is something of a last chance for the drug companies to redeem themselves in public opinion.

Case said that healthcare reform can’t succeed as a “lefty issue.” It needs a mobilized middle class to launch the change. She said that American companies no longer back the system, which is draining profits and tying their hands on wage increases.

Their book documents the devastating deaths that preceded COVID-19, taking the lives of 158,000 Americans in 2018 and contributing to the first three-year drop in U.S. life expectancy since the Spanish flu. Deaths of despair primarily strike those without a college degree whose loss of a way of life has led them to suicide, alcoholism, drug overdose, and finally premature death.

Today’s pandemic – which disproportionately has impacted African Americans and Hispanics – has further exacerbated these deaths of despair as those without a college degree are less likely to be able to continue their work and pay remotely, while those who are able to continue to work typically fill essential jobs that often put them at great risk of COVID-19 infection.

Case said the deaths of despair that she and Deaton study started before the opioid crisis, but the availability of the drugs made the trend “more horrific.”

Any path forward should focus on how to make it possible to lead a middle class life without a four year college degree, which is becoming more expensive and less likely to be a ladder up for most Americans. A robust system of alternatives to traditional degrees and specialty education would help, she said.