Editor’s Note: This analysis is part of the USC-Brookings Schaeffer Initiative for Health Policy, which is a partnership between Economic Studies at Brookings and the University of Southern California Schaeffer Center for Health Policy & Economics. The Initiative aims to inform the national health care debate with rigorous, evidence-based analysis leading to practical recommendations using the collaborative strengths of USC and Brookings. This post originally appeared in Health Affairs on May 21, 2019.

The past few weeks have seen a flurry of activity aimed at ending surprise out-of-network medical billing. On May 9, the White House released principles for a solution, including the goal that it should reduce costs. Last Tuesday, the House Energy and Commerce Committee released draft legislation. And Thursday, a bipartisan group of senators released new legislation to address surprise medical bills – the STOP Surprise Medical Bills Act –  building off their work last year.

The new legislation from Senators Bennet, Carper, Cassidy, Grassley, Hassan, Murkowski, and Young eliminates surprise out-of-network billing by prohibiting balance billing for categories of services where surprise bills commonly arise and prescribing an initial payment from insurers tied to median in-network rates, with the option for providers or insurers to initiate an arbitration process to challenge this rate. By tying automatic payment to the insurer’s median in-network rate (which tends to be notably below the mean for the physician specialties most commonly involved in surprise billing), the legislation could reduce health care costs as well, although the existence of arbitration as a backstop makes that uncertain.

The key differences between these bills are how they define the surprise bills warranting protection and how the payment from insurer to out-of-network provider is determined.

How Broad is the Protection from Surprise Bills?

The bipartisan Senate legislation, like the House Energy and Commerce bill, applies its protections to all commercially-insured individuals, regardless of plan type, whether fully- or self-insured, and across markets (employer, small group, and individual markets). Commercially-insured enrollees are then protected from surprise out-of-network bills, defined to be one of the following:

Notably, the current draft would extend beyond protection what we would consider “surprise bills,” to include out-of-network primary clinicians working at an in-network facility that a patient proactively chooses.

How Is Insurer Payment for Surprise Bills Determined?

The key question that differentiates billing regulation approaches is how the health plan’s payment is determined for surprise bills (or whether any payment at all is required – Representative Lloyd Doggett’s bill and a proposal from hospital trade groups do not require any insurer payment, leaving the eventual payment amount to be negotiated among the insurer, the hospital, and the physician). When an enrollee is seen by an out-of-network provider in one of the situations described above, the bipartisan Senate bill would require the enrollee’s health plan to pay directly to the out-of-network provider the “median in-network rate under the plan or coverage, less the applicable in-network [patient] cost-sharing.” This language leaves somewhat ambiguous what set of claims (e.g., which services and which geographic areas) should be included when computing the median in-network rate, and agencies would likely need to clarify how it should  be applied in practice through rulemaking. Notably, this is likely intended to be the same rate prescribed in the recent House E&C proposal.

A difference in the Senate draft, however, is that if either the provider or insurer is unhappy with that payment amount, they can initiate an independent dispute resolution (IDR), or arbitration, process to resolve the dispute. The IDR process would follow what’s called “final-offer” or “baseball-style” arbitration, popularized by New York’s surprise billing law. Under this model, each side – insurer and provider – submits a final offer to the independent arbitrator, who must then select one or the other. The logic behind this approach is that the threat of the arbitrator choosing the other party’s offer incentivizes each party to submit a reasonable offer or settle before going to arbitration.

What matters at the end of the day, though, is how arbitrators decide cases, typically through some sort of rule of thumb in reference to a benchmark rate. Given that this bill prescribes initial payment at a health plan’s median in-network rate, it seems reasonable to expect that rate would largely guide arbitration decisions, in which case the existence of the arbitration backstop would have little impact on insurer-provider negotiations over surprise bills (and this legislation would function very similarly to the recent E&C proposal). For instance, in California, which uses a similar approach of prescribing a payment rate tied to average contracted rates backstopped by arbitration, conversations with regulators indicate that this backstop arbitration option is almost never used.

The bipartisan Senate bill gives guidance to the arbitrators to consider the following in making their decisions:

These considerations would seem to push arbitrators in the direction of selecting payment rates in line with average contracted rates in the area, although the reference to prior contracted rates between the two parties is reason for concern. The big unknown to this model is what happens when a physician-staffing firm such as Envision or TeamHealth, or any emergency or ancillary physician group currently getting paid very high amounts far in excess of a plan’s median contracted rate, brings a case to arbitration. If the arbitrator sides with the highly-paid physician group and lets them retain their previously-contracted rate, costs could remain at their currently inflated levels.

It is also unclear why an arbitrator should reward providers with higher market shares, which could incentivize further consolidation of physician group practices.

The bipartisan Senate proposal also allows state laws to continue to specify how payment is determined from insurer to out-of-network provider (or other approaches such as network matching or bundling), but only if the state law applies to the same definition of “surprise medical bills” as the federal legislation. Under this Act, states with existing laws may have to take proactive action to retain their current payment methodologies.

As lawmakers build on this legislation, there are a few important considerations, some of which are similar to those we enumerated with respect to the recent House E&C bill.

As we’ve discussed elsewhere, today’s contracted rates are not indicative of what would result from negotiation in a normal market. Because the number of patients that a facility-based emergency and ancillary physician treats is largely unaffected by whether they contract with health plans (as they are not actively chosen by patients), they are able to bill out-of-network patients at basically whatever rate they choose, which in turn allows them to negotiate very high rates when they do come in-network (See Figure 1). 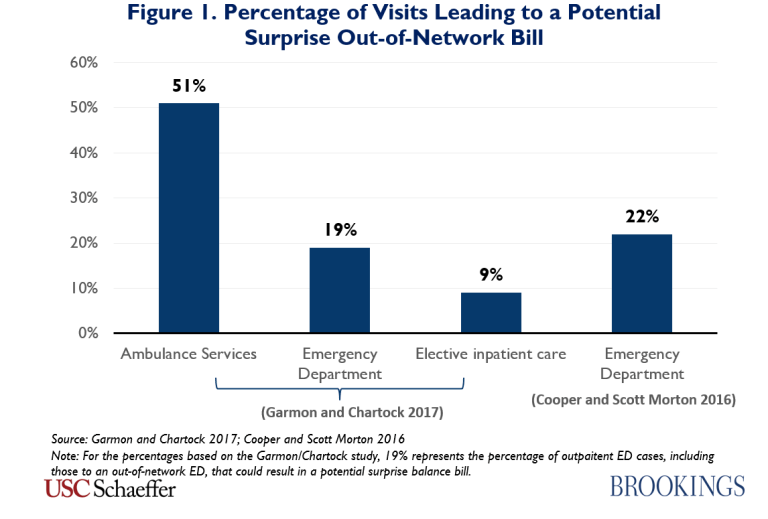 An out-of-network payment standard, therefore, ideally should not be based on the contracted rates these specialties receive today. Instead, we recommend setting an out-of-network payment standard at the same percentage of the relevant Medicare payment rate that the market generates for other specialists (ones that patients do choose) in the same geographic region. Alternatively, we recommend pursuing a “contracting regulation” approach.

If the plan-specific median contracted rate used to determine payment for surprise bills continually updates over time, both insurers and providers have an incentive to cancel contracts with payment higher or lower, respectively, than current median rates. This incentive is heightened because the legislation would require plans to pay out-of-network providers directly. This direct payment differs from what happens in some cases today, where plans may instead pay their covered portion (if any) of the out-of-network service to the patient, who in turn is expected to pay the provider. Thus, requiring direct payment to providers is likely to reduce the hassle of providers collecting out-of-network payments. However, requiring direct payment of a specified amount may also reduce providers’ incentives to enter into contracts with health plans, who would now know that they would be guaranteed direct payment of the median contracted rate even without a contract in place. While patients would be protected from receiving surprise bills in this scenario, basing a payment standard on median contracted rates could become problematic if provider non-participation is relatively common and contracted rates become unrepresentative.

An additional consideration in using a plan-specific median contracted rate is that doing so may entrench differential rates paid by different insurers, which may not be desirable to the extent those differences reflect current willingness to shield their enrollees from surprise bills.

Importantly, the arbitration guidance in this legislation is careful not to mention a provider’s billed charges, which can be extremely high and untethered by any market forces. As such, it is possible that the process will be seldom used since it is unlikely to override market-based rates, yet it is available to deal with any cases that involve extenuating circumstances worthy of review. However, compared to just having a payment standard at the plan’s median contracted rate, the arbitration option involves risks and may lead to additional costs. In particular, the reference to previously contracted rates between that health plan and insurer may lead to arbitration decisions that hold costs at their status quo level, rather than allowing average rates to come down to today’s medians or below, as they likely would under the E&C approach. (Median contracted rates for emergency and ancillary physicians tend to be considerably below the means, as a minority of physician groups or staffing companies appear to earn especially exorbitant rates today).

Short of scrapping the arbitration option, lawmakers could revise the guidance to arbitrators to encourage strong consideration of the plan’s median in-network rate unless there are pronounced extenuating circumstances specific to the service in question, and also eliminate the reference to previous contracted rates between the two parties.

The bipartisan Senate bill, as drafted, would apply its protections to all out-of-network services performed at or referred out by an in-network facility. However, policymakers may wish to preserve the ability of patients to willingly seek treatment by an out-of-network physician practicing at an in-network facility. The House E&C bill language handles this adeptly by allowing a notice and consent exemption from the protection at in-network facilities, but only for specialties other than emergency medicine, anesthesiology, radiology, pathology, neonatology, assistant surgeons, hospitalists, and intensivists.

None of the federal bills to date have done anything to address surprise out-of-network bills from ambulances, despite the majority of ambulance services being provided out-of-network. Worse, states are unable to regulate air ambulance surprise billing, so it is incumbent on the federal government to enact protections in this area. The same approach applied in this legislation to other surprise bills could be applied to ambulance services, although the median contracted rate provides even less information for ambulances given the high out-of-network prevalence. Reference to a multiple of the Medicare rate might be more useful.

The STOP Surprise Medical Bills Act marks another valuable entry into the federal debate to address surprise out-of-network billing. In addition to protecting patients directly from most surprise bills, the Act likely has the potential to reduce health care costs, although the arbitration process and its guidance makes that uncertain. Unlike the E&C draft, the legislation importantly incorporates protections for post-stabilization care and laboratory tests.

As lawmakers continue their work on this important issue, focus should be given to controlling health care costs and incorporating ambulance services, especially air, into any protection.