This conference was presented by the USC-Brookings Schaeffer Initiative for Health Policy, which is a partnership between Economic Studies at Brookings and the USC Schaeffer Center for Health Policy & Economics. The Initiative aims to inform the national health care debate with rigorous, evidence-based analysis leading to practical recommendations using the collaborative strengths of USC and Brookings.

These challenges and others associated with universal health coverage were discussed at “Moving toward Universal Coverage: Policy Approaches,” hosted by the USC-Brookings Schaeffer Initiative for Health Policy along with the Price School of Public Policy and the USC School of Pharmacy. The event was held on September 26 on the USC campus and featured remarks by California Attorney General Xavier Becerra (full video of the event here).

From his days as a member of the U.S. House of Representatives to his current tenure as California Attorney General, Xavier Becerra has championed expanded access to care. Becerra shared his views about this goal — and the obstacles in its way.

Schaeffer Center Advisory Board Chair and Judge Robert Maclay Widney Chair Leonard D. Schaeffer introduced the Attorney General, lauding Becerra’s efforts to improve access to healthcare — from his work on ACA and other federal health programs as part of the House Ways and Means Committee to defending the state against attempts to cripple the legislation.

While acknowledging that no system is perfect, Becerra, who has publicly championed a single payer system, pointed out the successes of Medicare and the Veteran’s Administration, as well as protections brought about by the ACA.

Becerra reminded the audience that the ACA also protects people with private insurance. For instance, it provides guaranteed coverage for those with preexisting conditions and the ability for young adults to stay on their parent’s plan until age 26.

But Becerra also emphasized his vision for bold solutions. “I hope Americans realize that this is not a time to do it mildly,” he said. “…We’ve got to get to the point where healthcare is no longer a privilege. Until then, we’re not really fulfilling our true role as the most dynamic country in the world.”

In a follow-up conversation with USC Price Professor of Health Policy Paul Ginsburg — who directs the USC-Brookings Schaeffer Initiative and is director of public policy for the USC Schaeffer Center — Becerra was asked about his use of antitrust legislation to address exorbitant costs. 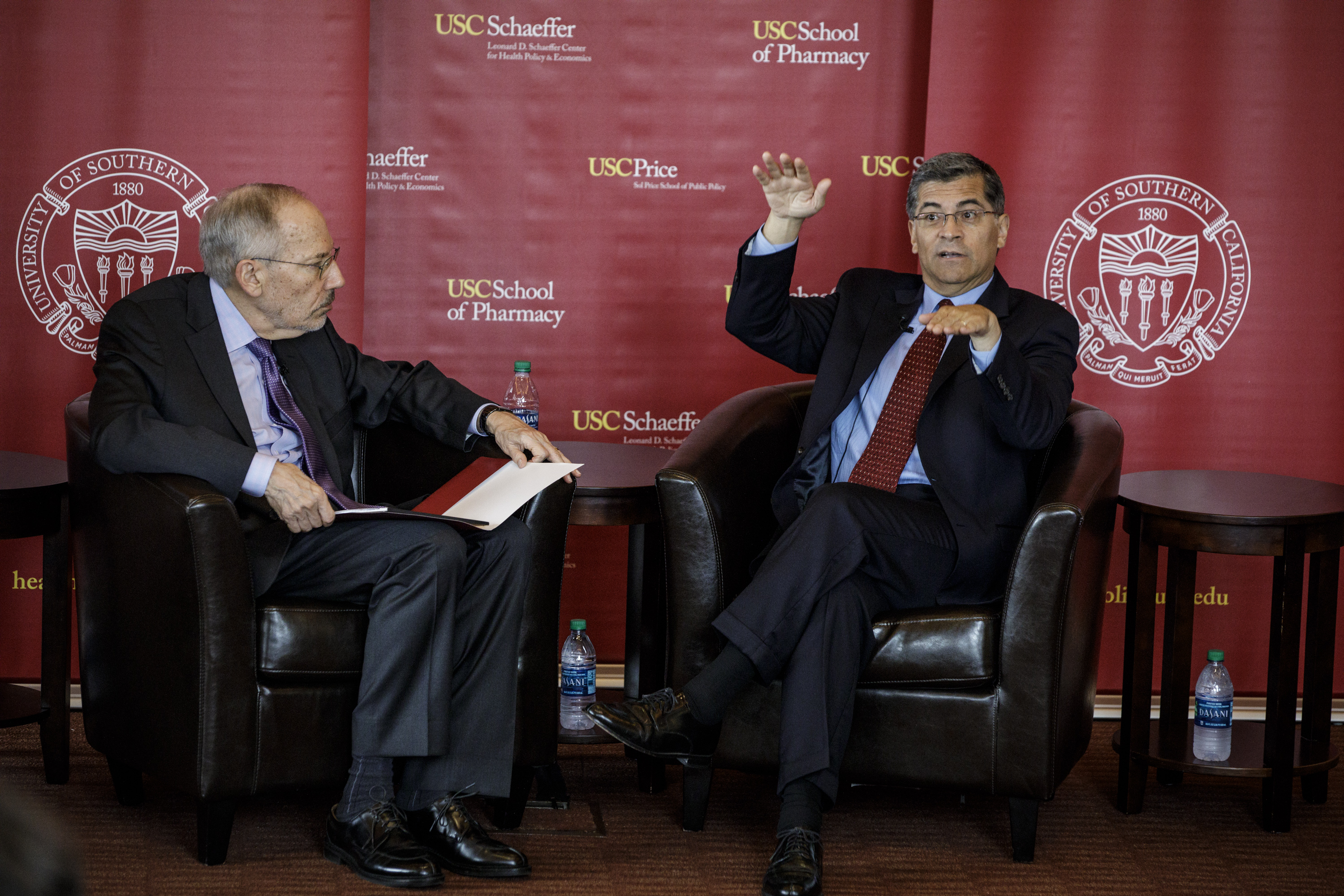 As an example, they discussed the case which accuses northern California health system Sutter Health of using its market dominance to drive up healthcare prices in the region. The suit is being watched closely nationwide because of the growing trend of healthcare consolidation — some of which has been driven by the ACA’s focus on efficiency. “If we allow sunshine on some of these practices, we can see if they are for efficiency or not,” he said.

Their conversation continued on a range of topics that present barriers to achieving universal coverage, ending with an opportunity for audience questions.

Schaeffer Center Director Dana Goldman welcomed USC-Brookings Schaeffer Associate Director Loren Adler and fellows Christen Linke Young and Matthew Fiedler for a broader conversation about how expanded access to healthcare might be achieved. Goldman is a Distinguished Professor of Public Policy, Pharmacy, and Economics at the USC School of Pharmacy and the Price School of Public Policy.

Young discussed ways to build on the ACA, outlining three competing visions for the nine percent of Americans who remain uninsured. The options include single payer, the current administration’s approach to replace the ACA with block grants to states, and fixing the ACA by closing coverage gaps.  Young focused on how policymakers could close gaps in the ACA to get to universal coverage. She pointed out a number of states have not expanded Medicaid, and in these states the uninsured rate is higher. “We need to prod those remaining states to expand Medicaid or cover this population through a new federal program.” Young also suggested eliminating work-reporting requirements to reduce administrative burden and broadening access for the undocumented.

In addition, affordability must also be addressed, she said. “We need to reduce the percent of income that everyone, at all levels, has to pay to get coverage,” Young said. 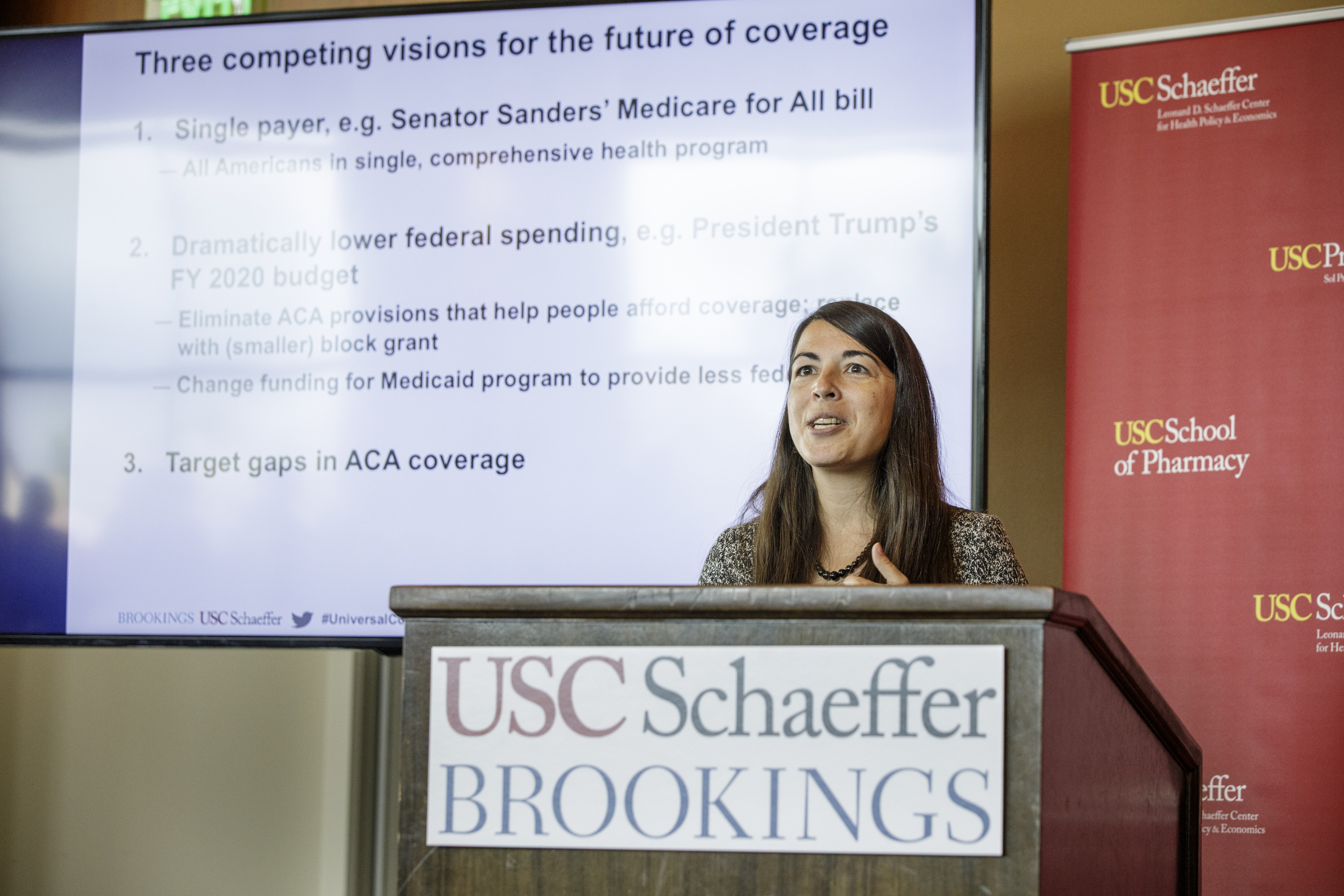 Fiedler, who worked on ACA implementation as chief economist of the Council of Economic Advisers in the Obama administration, addressed the need to reduce costs in the context of private health insurance. “The goal should be for prices to be high enough to ensure providers have the resources to provide care of the appropriate quality — but no higher,” he said.

The balance is tricky. Excessive prices create financial burdens for families, employers and the government. However, inadequate pricing lowers the quality of care and can threaten access by driving providers out of the marketplace.

Echoing Becerra’s comments, he suggested stronger antitrust enforcement as one approach to improve pricing. Others, he said, include reforming policies that encourage high prices and making consumer price comparisons easier.

More government involvement may also be needed, Fiedler said — including direct regulation of prices and a public option to private insurance. “But we need to be cautious,” he urged.

Adler zeroed in on a specific practice that has affected 40 percent of Americans: surprise medical bills from providers who are outside their insurance networks. Even though the Schaeffer Center and USC-Brookings Schaeffer Initiative have informed bipartisan legislation on the issue, much more needs to be done, he noted.

Surprise medical bills often arise from emergency situations when people have no choice of provider. However, they can occur even when the patient carefully “does everything right,” Adler said. “You go to an in-network hospital, and you schedule a surgery after checking that the surgeon is also in your insurance company’s network. But then it turns out that the anesthesiologist was not.”

These relatively common events are not random, according to Adler. “This really represents strategic behavior” on the part of a number of providers. In addition to anesthesiologists, these include pathologists, emergency medicine physicians and radiologists. The average range they charge varies from 200 percent to 350 percent of Medicare rates.

Agreement on payment levels is challenging, but from the perspective of the patient Adler posits a simple solution: There should, for example, be no such thing as an out-of-network anesthesiologist. 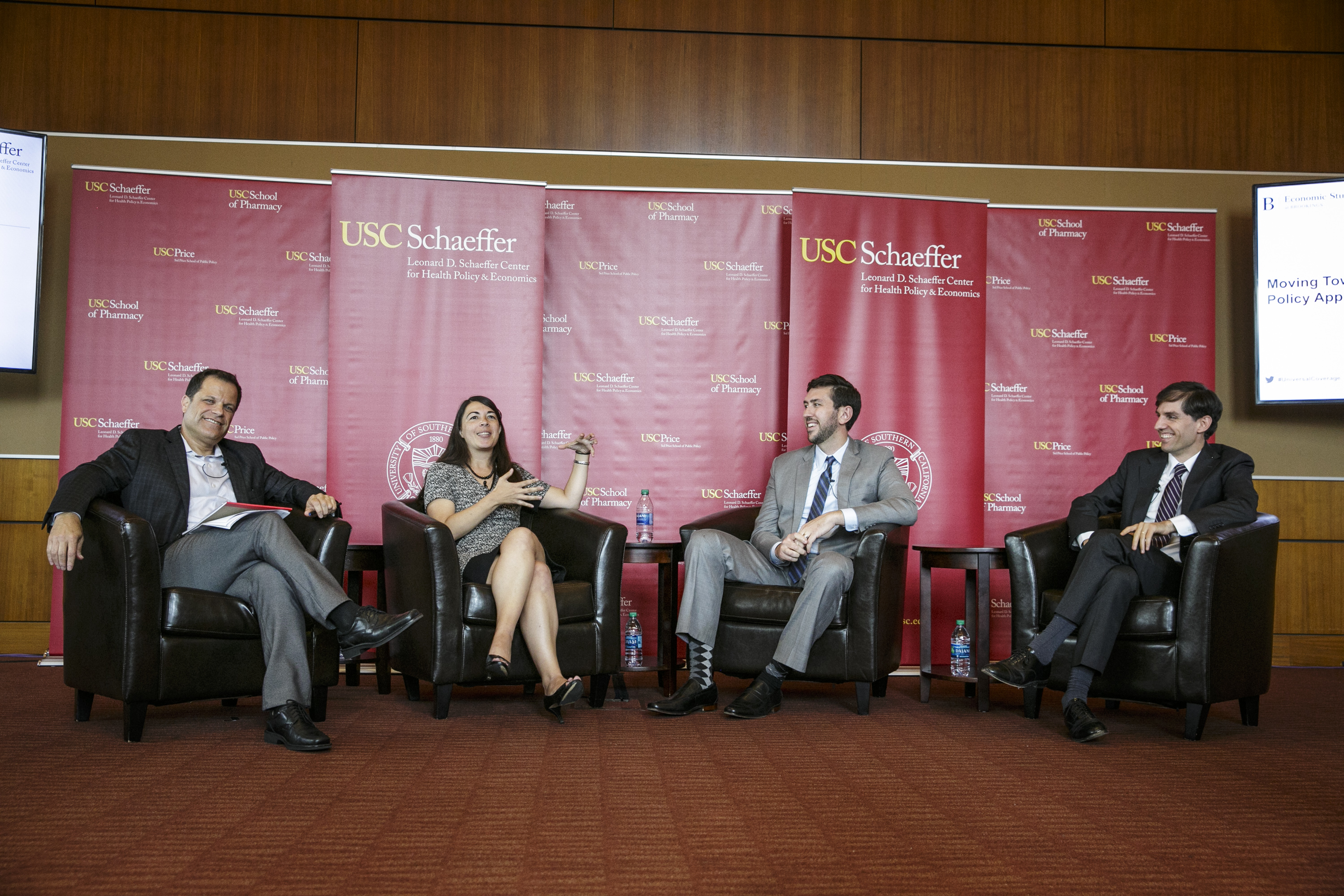 In summing up the event’s conversations, USC Price School Dean Jack H. Knott said, “[Healthcare] is one of our most important national challenges — and we’ve been trying to solve it for more than a hundred years.”

The Schaeffer Center is an interdisciplinary partnership between the USC School of Pharmacy and USC Price School of Public Policy that employs evidence-research to address pressing healthcare related challenges — from rising healthcare costs to chronic disease and population health. The USC-Brookings Schaeffer Initiative for Health Policy is a collaboration with the Brookings Institution, based in Washington, D.C.