Many social assistance and charity programs distribute aid to needy recipients free of charge. Many others require recipients to contribute their own resources (time or money) to receive benefits. Whether aid programs should include recipient contribution requirements is hotly debated among policymakers. For example, in the U.S., Republican lawmakers have pushed to tie Medicaid and food stamp benefits to recipient work; Democratic lawmakers and consumer advocates have argued that such requirements strip benefits from those who need them most. In response, the GOP White House budget director defended the proposed policies saying, “what we’ve done is not to try and remove the safety net for folks who need it, but to try and figure out if there’s folks who don’t need it that need to be back in the workforce.”

Despite this large literature, we know little about public support for recipient contribution policies.  For example, do people understand and care about screening? This is a critical gap because policymakers need to respond to the political landscape and citizen preferences when designing social programs.

To study this question, I worked with Sally Sadoff (UC-San Diego) using a field experiment on the Understanding America Study (UAS) Internet panel. This panel is unique in that our respondents were a group of nearly 5,000 Americans representative of the U.S. population. 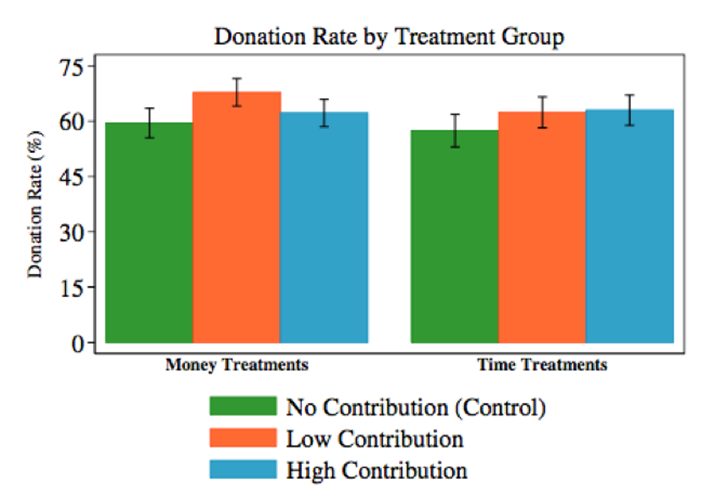 We also conducted treatments in which the recipient contribution requirements was time – 5 or 25 extra minutes completing a survey. Here, we find that time contributions increase support, but the same inverse-u shape is not observed. This is potentially because we don’t expect lower income recipients to be screened out in the treatment that requires a lot of time.

Finally, we examine whether individual preferences align with the political debate in the U.S. – i.e., that conservative policymakers are generally less in favor of social programs and more in favor of recipient contribution requirements than are liberal policymakers. We find suggestive evidence of differences in screening preferences between liberal and conservative-leaning participants, as identified by previously reported voting intentions in the 2016 U.S. Presidential election. The inverted u-shape response to recipient monetary contributions that we find in the full sample is strongest among conservative-leaning participants. They have lower levels of program support than liberal-leaning participants at baseline, but almost fully close the gap in support when recipients make small monetary contributions.

When policymakers and practitioners design programs for needy recipients, they should take into account public support for these programs. Our findings suggest that public support is actually higher when recipients are required to make a small contribution.