When COVID-19 hit the United States earlier this year, the Understanding America Study was well-positioned to track, in real-time, the social and economic impact of the pandemic on U.S. residents. Since March, we have reported on a wide array of national findings, including unprecedented rates of job loss and a rapid increase in symptoms of anxiety and depression.

Yet, national trends do not always reflect the social conditions we experience closer to home, and in the case of Los Angeles, residents appear to be struggling with even higher levels of economic and psychological distress than national trends suggest. We know this because our UAS panel includes a subpanel of over 1,800 Los Angeles County residents randomly selected from households throughout the county.

When the pandemic arrived in Los Angeles just a few months ago, our L.A. subpanel allowed us to immediately begin tracking local conditions with a level of frequency and rigor uncommon to most cities or counties. We added a short supplement that doubled the frequency with which time-sensitive data were collected in the County. Since April, we have been providing weekly updates on this survey data to the Los Angeles County Department of Public Health.

Here are a few major findings from our Los Angeles survey work so far:

One of the biggest and most widely-reported impacts of the pandemic has been the unprecedented drop in U.S. employment that occurred between March and April – the worst employment drop the country has seen since the Great Depression. 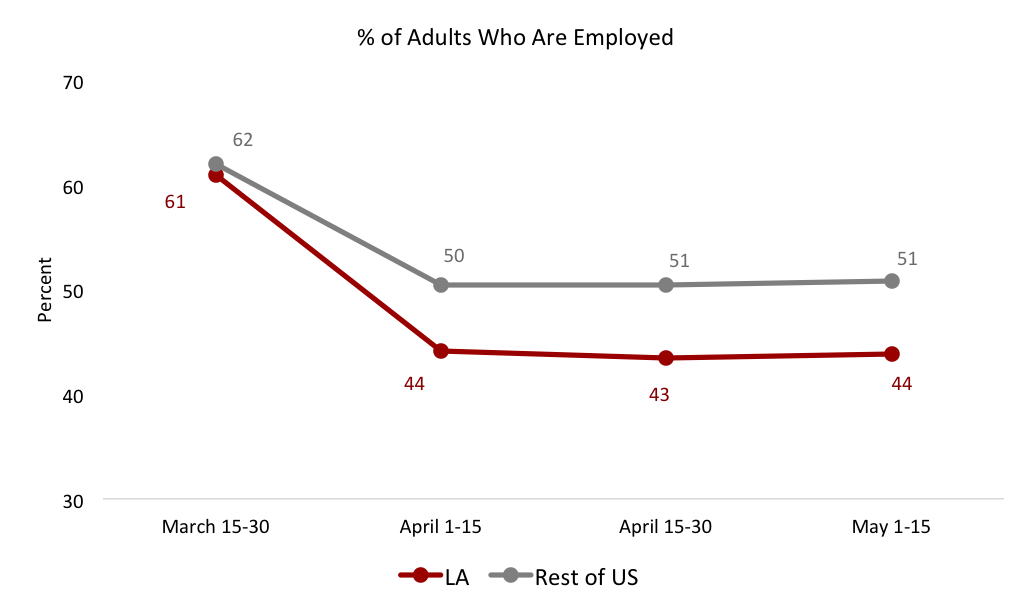 Likewise, as we reported at the national level, we find in L.A. County that people of color were disproportionately impacted by pandemic-related permanent and temporary lay-offs. By mid-May, 32% of Hispanic workers, 24% of Black workers, and 23% of Asian workers employed in mid-March had lost their job while only 13% of White workers employed in mid-March experienced a similar job loss.

You can also see that, at any given point in time, levels of economic insecurity are much higher in L.A. than in the rest of the country. According to our analyses, this disparity is largely an artifact of the more precarious financial position Angelenos held long before the pandemic arrived. Many L.A. residents struggle to make ends meet – a fact of life made no easier by the exceptionally high cost of living in L.A. Even at baseline in March – before the full economic impact of the pandemic had been felt – the estimated percent chance of running out of money in L.A. was 10 percentage points higher than the national average, at 26% versus 16%. 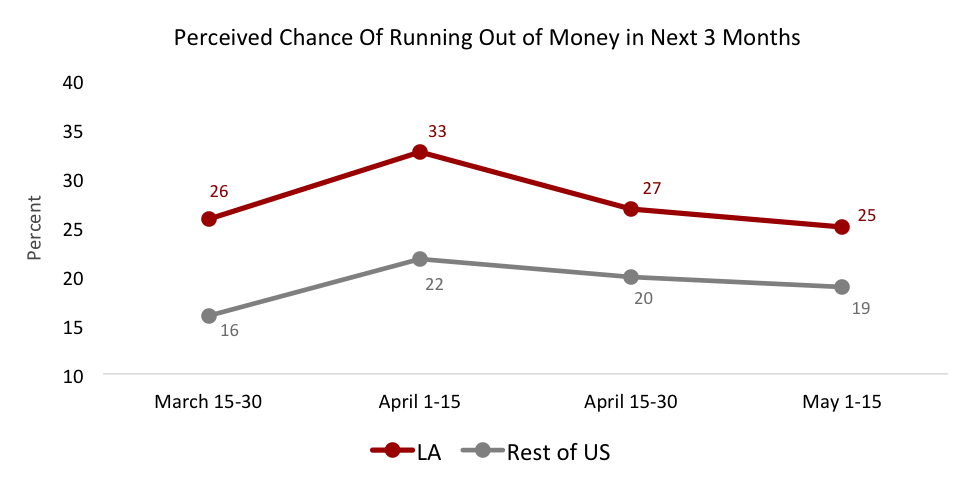 While many Angelenos were poorly positioned to weather the economic and psychological toll of the pandemic, they were – and continue to be – quite vigilant and timely in their efforts to keep themselves healthy and safe from infection. In March, L.A. County residents were already more likely than the rest of the country to be engaging in protective behaviors like wearing masks and avoiding public spaces. And even as rates of social distancing have increased over time and across the country, Angelenos have continued to exhibit exceptionally high rates of protective behavior.

It is anyone’s guess whether and for how long this level of participation in mask-wearing and social-distancing will persist in L.A. It is also unclear what impact it will have on the future of L.A.’s economy, its culture, and its public health. How will the “new normal” differ across counties and states and how will it evolve over time? By continuing to track social and economic conditions in L.A. and in the rest of the country, we certainly intend to find out.

For more information about the work we are doing to understand the social and economic impact of COVID-19 on Los Angeles County and the United States more generally, please visit our Understanding Coronavirus in America survey website. You can also visit our tracking website to view graphs of the data we are collecting and track key results in real time.