Photo caption: Medical students protest outside the office of Sen. Rob Portman (R-Ohio) to express their views on changes to Obamacare. Tony Dejak/AP

Editors Note: This article was originally posted in The Conversation.

Republicans who want to repeal the Affordable Care Act (ACA) emphasize the importance of patient choice and market efficiency. Democrats opposing repeal focus on the need to protect the most vulnerable.

As economists, however, we reject the false choice between efficiency and justice. A strong and vibrant marketplace protected by a prudent government safety net can provide us with both. We also believe that, despite our divisions, Americans still care deeply about finding solutions with support across party lines.

President Trump just about promised the same thing. In his first address to Congress, he asked for a plan that would “expand choice, increase access, lower costs, and at the same time, provide better health care.”

Our proposal starts with the simple proposition that all Americans deserve the same health care opportunities. Today, the poorest Americans are served by a Medicaid system with reimbursement rates so low that many physicians that participate in private insurance do not participate in Medicaid. Thus, poorer Americans do not have access to the care that other Americans do. Expanding Medicaid, as the ACA did, helps the poor, but does not raise their quality of care to the level that wealthier Americans enjoy.

To eliminate separate and unequal health care systems for the poor and the rich, we would replace Medicaid with access to generous subsidies that cover the premiums for private health insurance. We detail these below.

To fund this, tax breaks for employer-sponsored insurance and medical expenses would be eliminated. Our proposal can be extended to Medicare, but we leave it alone to avoid the political costs.

The second step of our program is to end a process known as community rating, which mandates that the entire community of individuals – both individuals at high risk and those at low risk of illness – gets charged the same rate for insurance, perhaps varying with one or two selected characteristics like age.

While community rating sounds attractive, limiting the cost of premiums for high-risk folks drives up premiums for the low-risk ones, who therefore seek to leave the marketplace. To prevent this exit, the ACA includes the unpopular individual mandate.

Moving to experience-rated health insurance would not be unprecedented. Before the ACA, a number of states did not require community rating in the individual and small group health insurance markets.

But what about the poor? While experience rating is efficient, it is not very fair. For this reason, we couple it with financial assistance for the most vulnerable.

3. Subsidize Insurance Premiums for the Poor and Especially Poor Households Burdened by Illness

While Republicans oppose many features of the ACA, they should be willing to support the one feature the ACA borrowed from conservatives at the Heritage Foundation: premium subsidies. Even President Trump endorsed them, though he referred to them as “tax credits.” We want to use that feature to correct the unfairness of experience rating and to promote the justice in health care that Democrats are fighting for.

To demonstrate that our approach can be both financially sound and compassionate, we have developed a schedule of subsidies based on data from a federal government survey of health care spending – the Medical Expenditure Panel Survey. Our schedule requires no new federal spending.

We would offer families premium subsidies that would enable them to buy a “basic” health insurance plan that covers all health expenditures above a deductible and has no copay. This basic plan is one that does not require providers be in network, or that individuals get preapproval.

To ensure that these subsidies are fair, the schedule covers the cost of more generous “basic” plans, such as plans with low or no deductibles, for the poor and for the sick. Conversely, it offers a less generous subsidy for healthy or wealthy households.

To ensure that the subsidies also give people a choice of plans, everyone – rich or poor – is free to take their subsidy and apply it to the purchase of a more generous plan of their choosing. If the subsidy is insufficient to cover the plan they want – as it likely would be for the rich – they would pay the additional premium out of pocket.

To build our schedule, we first define two groups: the 20 percent of families with the highest health expenditures (we’ll call these “extremely burdened” families), and the 80 percent with lower expenditures.

For example, extremely burdened families at less than 300 percent of the federal poverty line (currently US$24,300 for a family of four) receive full subsidies for a basic plan with no deductibles or copays. Above 300 percent, the deductibles in the fully subsidized basic plan rise with income. 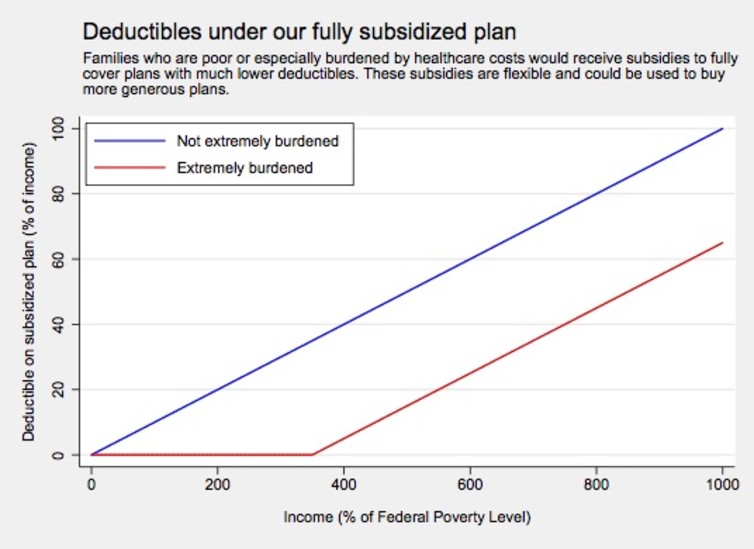 At the other extreme, a healthy family with income of more than 10 times the federal poverty line receives a negligible subsidy that covers only a highly catastrophic plan with a deductible equal to annual income. Such a family has the means to finance its own coverage, particularly since its experience-rated coverage will be cheap. Under our plan, families could use their subsidies to buy their basic plan for free or to partially fund purchase of a more generous plan, whichever is a better deal.

Families that are both poor and sick would benefit most from our hypothetical schedule of subsidies relative to how they fare under the ACA. As an example, suppose families chose between their basic plan or one with a $500 deductible and a 10 percent copayment. A family at 133 percent of the federal poverty level and with high health expenditures would gain about $919 overall, equal to 4 percent of its income, relative to how it fares under the ACA. Part of these benefits come from the wage increase that economists have found would partly offset the elimination of the tax break for employer sponsored insurance. But even without that, most families would benefit.

The only losers are wealthy families with high health expenditures. For example, a family with an income that is four times greater than the federal poverty level – roughly $98,000 for a family of four in 2016 – would lose on average $1,061, only 1.2 percent of their annual income. But the wealthy are the ones that can most afford to buy additional insurance to protect themselves from these costs. 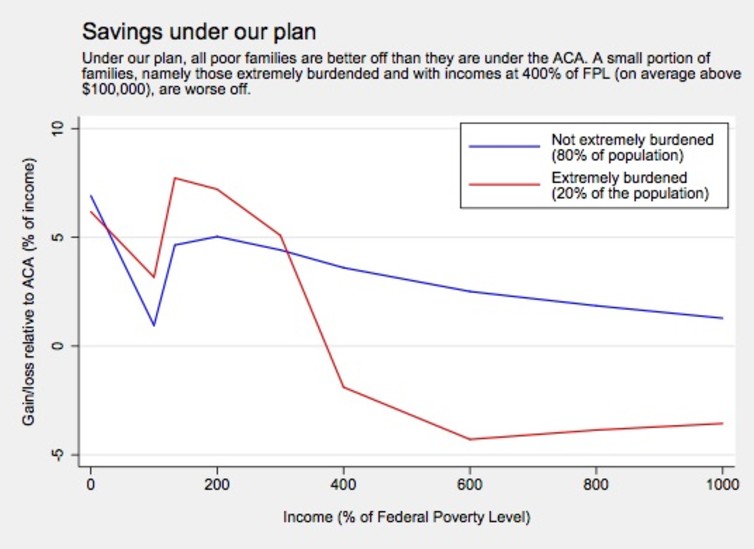 In other words, our schedule provides as much care as the ACA, often at lower cost. Families that are both heavily burdened by health care expenses and poor (below 400 percent of the federal poverty line) would benefit, as would all healthy families. Together, these households constitute about 90 percent of the American population.

Moreover, our schedule does not increase the federal budget deficit. It is fully paid for by the existing federal budgets for Medicaid, the premium subsidy and the tax break for employer-sponsored income, together roughly $640 billion in 2016.

We stress that this exercise is simply an illustration of what is possible under our proposal. Policymakers could alter the distribution of benefits as needed, although we would argue that poor and sick families must be protected from financial burdens.

Subsidies make experience rating fairer for the sick. But what about healthy people who might fall ill this year? Much like drivers who experience an accident see an increase in their auto premiums the following year, low-risk people just unlucky enough to suffer a serious illness might experience a sudden jump in their premium next year.

If insurance contracts lasted for several years, they too would be protected against such a sudden premium increase. We would encourage such plans by linking our premium subsidies to the purchase of a long-term plan.

Your premium can change year to year, but it will reflect the average health expenditures of others in your pool. So even if you fall ill after a few years, your premiums will not reflect your specific health history for the duration of the contract.

More importantly, the long-term health insurance contract has termination fees. Only healthy individuals want to leave the contract, because they are cross-subsidizing the premiums of the less healthy. But the contract would have termination fees that reflect the value of these cross-subsidies from the healthy to the rest of the pool. These fees make leaving the pool unprofitable for the healthy, so they remain.

Anyone who has signed a two-year contract with a cellphone company fears termination fees. A natural concern is that such fees stop consumers from shopping around to get a better deal. Yet community rating and short-term contracts are no better: They allow you to shop around, but you just pay high premiums everywhere if you are healthy.

Moreover, experience rating with a long-term contract does allow shopping around. The only restriction is that your new insurance company has to pay your termination fees to your old insurance company. That is not a fanciful concept: Even cellphone companies like T-Mobile offer to do that to get you to switch from their competitors.

Of course, if your new insurance company has to buy your contract out, it will charge you for it, so the healthy do not get price relief by leaving the insurance pool. This is more effective at stopping the unraveling of insurance pools than the ACA’s individual mandate because it is enforced by the market, not the government.

How do we get from the ACA to our plan? Our proposal simply generalizes the ACA’s insurance exchanges and premium supports – the market-oriented parts of the ACA that President Obama borrowed from conservatives.

It calls for all non-elderly individuals – people formerly covered by Medicaid, people purchasing plans on exchanges and those with employer-sponsored insurance – to purchase their care through the exchanges.

No marketplaces need to be built from scratch. The ACA already contains a mechanism for them to receive premium subsidies.

A key challenge with our plan is that insurance companies have to set experience-rated premiums and write long-term contracts. That said, they have expertise writing risk-adjusted premiums in the auto and homeowners insurance markets.

Moreover, the premiums for a long-term insurance plan need not be set out years in advance. They can be set year to year and track the risk experience of a pool that is created at the beginning of the contract.

Our proposal contains something for both conservatives and liberals to love (and hate). We suspect conservatives would like our proposal if they looked under the hood: it reduces regulations and employs voucher-like subsidies.

Liberals may balk. They like the ACA’s exchanges, but prefer government-administered Medicaid to a system of private subsidies for the poor. But we think liberals support Medicaid as they hope it should be, not as it is. Our plan eliminates separate-but-unequal care for the poor under Medicaid and gets liberals closer to the outcome they really want.