Conventional wisdom holds that more education causes better health. This is because a large body of research has found that the more education a person has, the better their overall health. However, a recent study by CESR researchers Silvia Helena Barcellos and Leandro Carvalho, together with Patrick Turley, shows that this is not necessarily the case.

We find that more secondary education improves health in middle age by reducing body fat and lung conditions, but it also worsens health by increasing blood pressure. Our study analyzes a policy change in England, Wales, and Scotland that increased the minimum age at which students could leave school from 15 to 16 years old. We find that the reductions in body fat caused by this extra education occur where they matter the most: obesity rates decrease by 31 percent, although rates of overweight did not change significantly. In contrast, the increases in blood pressure may not be too concerning because even though blood pressure increased overall, the prevalence of high blood pressure did not.

Figure 1 illustrates the effect of the 1972 school leaving age reform on education. The circles show the fraction of individuals staying in school until age 16 by date of birth. The vertical dashed line marks the first cohort affected by the reform, formed by those born between September 1957 and August 1958. Students to the left of the line could drop out at age 15 while students born to the right were forced to stay in school until age 16. One can see from the figure how the reform increased education. 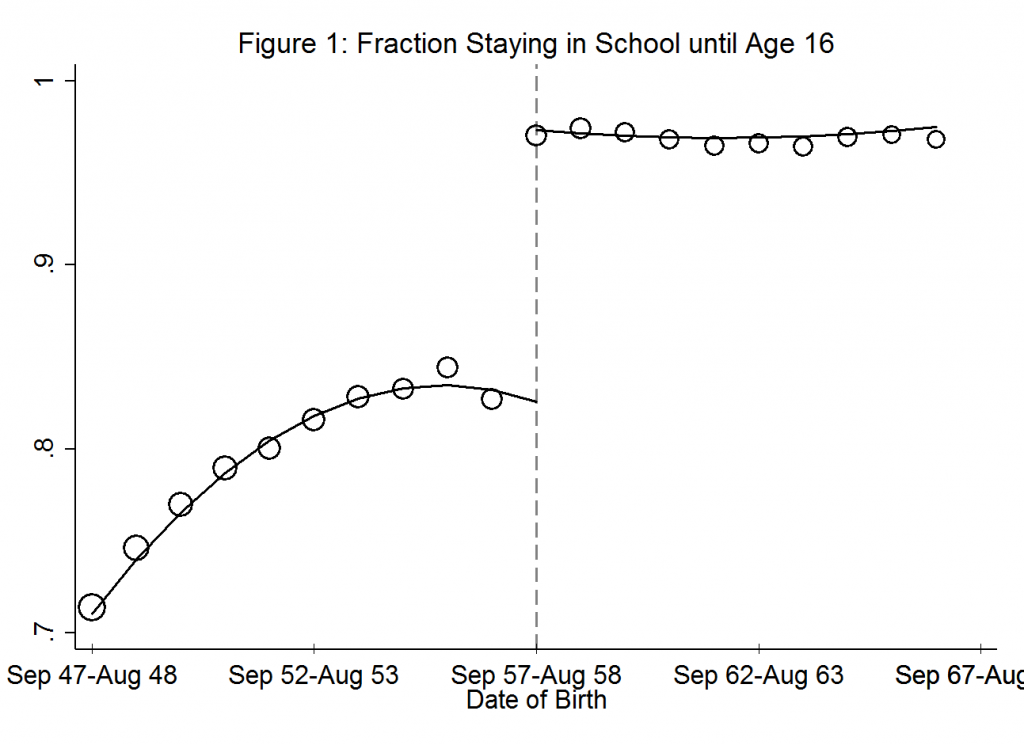 We investigate whether education affects health by examining if there is a corresponding difference in the health of those born right after September 1957 and those born right before. The study uses data from the UK Biobank, which measured the body size, lung capacity, and blood pressure of more than half a million 40-69 year-olds living in the UK between 2006 and 2010.

We find that those born after September 1957 have lower body fat and fewer lung conditions than those born before that date, but they also have higher blood pressure. Education improves the first two aspects of health while worsening the third.

The reduction in body fat happens among those who are most unhealthy. Figure 2 shows a substantial reduction in obesity rates exactly for those affected by the school leaving age reform. We estimate that the policy reduced obesity by 31% among those forced to stay in school one more year. By comparison, Figure 3 shows the policy had not effect on the fraction of study participants classified as overweight. The contrast of the two figures highlights how different people were differently affected by the policy. 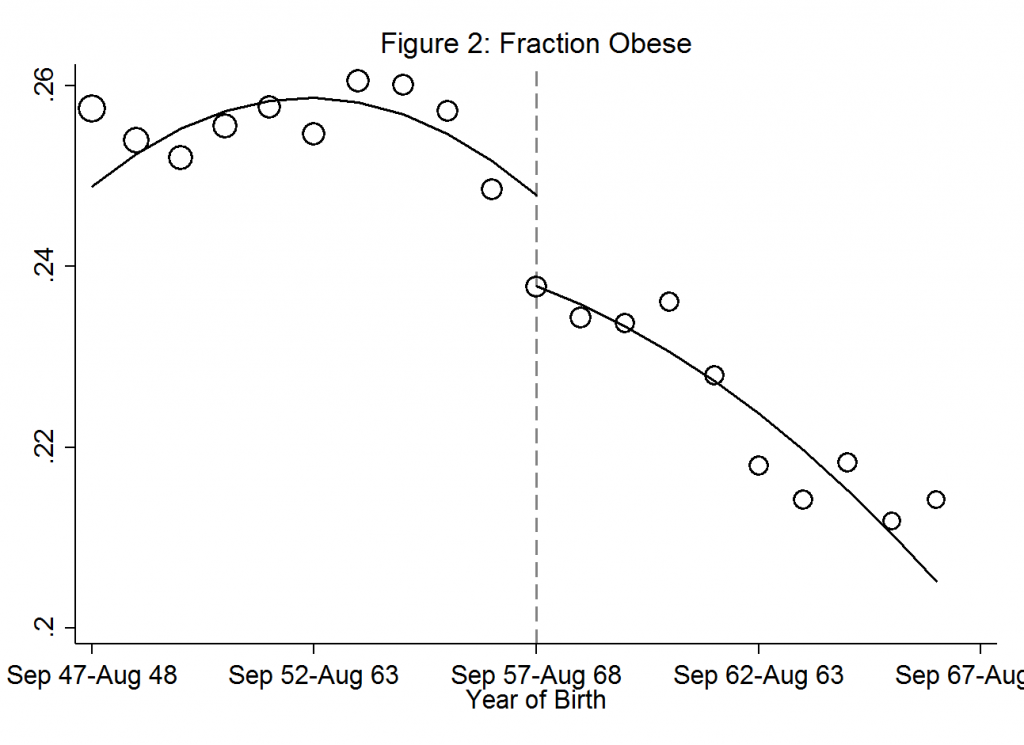 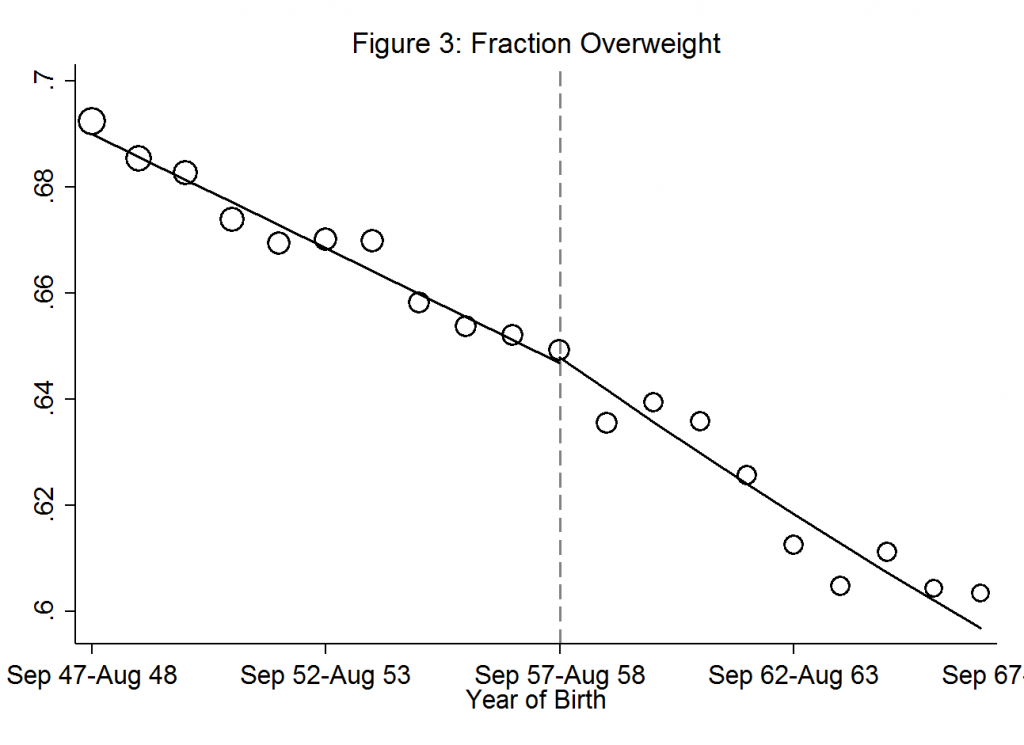 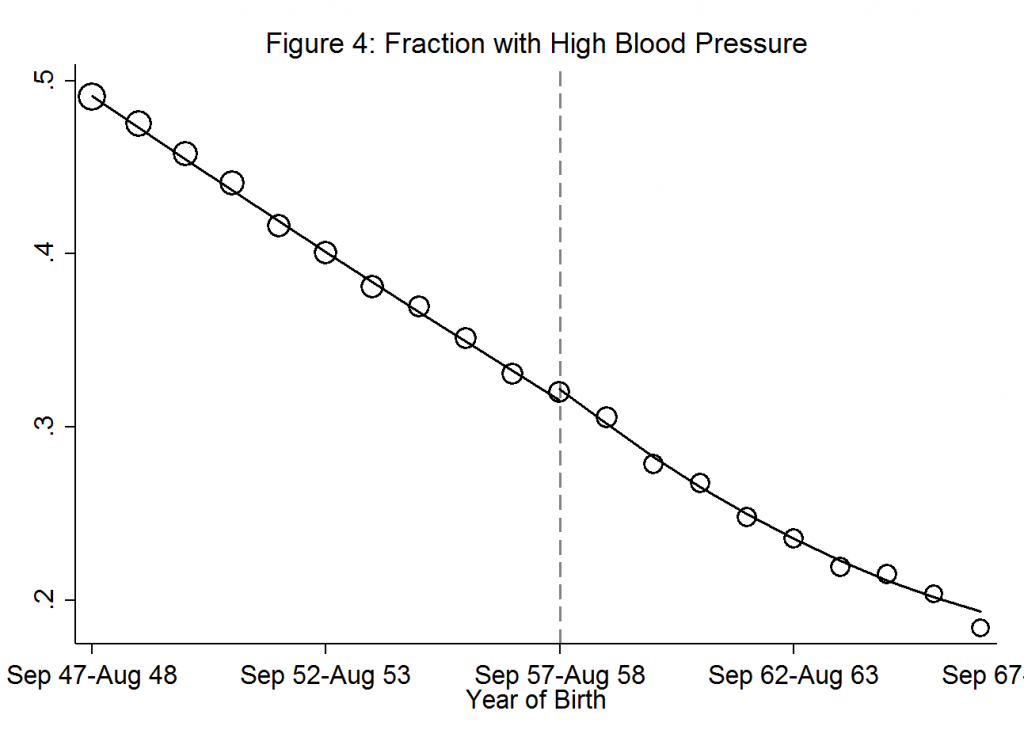 Why does education have such disparate effects on different health dimensions? In follow-up work, we are investigating the channels in which education affects health. Do the better educated have a better diet and in consequence less body fat? Does extra education lead to more stressful occupations, increasing blood pressure? We are also examining whether genetic factors determine the extent to which one’s health is affected by education, investigating for example whether the effects on body fat depend on one’s genetic risk for obesity or whether the effects on blood pressure depend on one’s genetic risk for hypertension.

Overall, our current results show that education does improve health, but not for everyone. Education helps mostly those who are at the bottom of the health distribution – the least healthy. Even though education might only marginally improve, or even decrease, health for the average person, the fact that it offers large benefits for those who need it the most suggests that improving health can be a valid goal for educational policy.