Using prize-linked incentives to promote financial health is a behaviorally informed approach of recent interest to policymakers in the U.S.  Prize-linked programs incentivize positive financial behavior by linking specific actions (e.g. saving or paying down debt) with an entry into a lottery for (usually) a cash prize.  Programs featuring these incentives have proliferated across the U.S. in the last decade, particularly with regards to saving.  Though correlational evidence from the field and some evidence from laboratory settings suggests that these incentives may be attractive and motivating to consumers, there is little evidence from field experiments investigating whether they cause behavior change and improve financial health.

In a recent study, I conduct the first large-scale randomized controlled trial in a developed country context examining whether prize-linked incentives can promote positive financial behavior, and the first examination of whether these incentives can be effective in promoting debt reduction.  Randomly selected participants in a debt management plan (DMP) were given access to a program that probabilistically linked debt-repayment with debt relief.  Specifically, each on-time in-full monthly debt repayment granted the participant an entry in a monthly lottery for $500 to be applied towards their existing DMP balance.  Each on-time monthly payment also granted participants one entry into the grand prize drawing, $10,000 to be applied to their outstanding debt. One monthly drawing was held each month in 2016, and the grand prize was drawn in January 2017.  Program participants received monthly emails including information on the previous month’s winner as well as information regarding upcoming drawings.

Similar to evidence from non-randomized field studies examining the efficacy of prize-linked incentives in improving savings behavior, I find strong demand for the program and positive correlational effects.  Nearly three-quarters of DMP clients in the treatment group elected to participate, and program participants were timelier with their debt repayments, paid off more of their DMP debt, were less likely to drop out of the DMP, and had fewer late payments and charge-offs on debt obligations than program non-participants.  However, leveraging random assignment, I find that these effects are driven almost entirely by selection (i.e. individuals who were more likely to repay their debts were more likely to participate in the incentives).  Over the period in which the incentives are active, I find a precise null average treatment effect on on-time payments (0.5pp, 95% CI = [-0.3pp, 1.3pp], control mean = 89%), DMP dropout (-0.1pp, 95% CI = [-1.3pp, 1.0pp], control mean = 16%), and outstanding DMP balance (46.7 dollars, 95% CI = [-$132, $225], control mean = $11,558).  Average treatment effects on auxiliary outcomes gathered from credit reports are similarly null, as are effects estimated over the year after the incentives were removed. 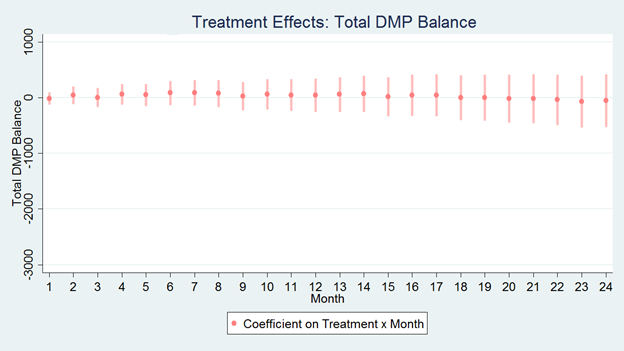 Examining which baseline characteristics predict take-up, I find evidence that individuals who are more likely to repay their debts ex-ante are more likely to participate in the prize-linked incentives: they have higher credit scores and fewer delinquencies than program non-participants.  These results suggest that prize-linked incentives may not change behavior, and may simply be adopted by individuals who are likely to be successful in the linked behavior anyway.

Like any randomized field experiment, results discussed here may not immediately translate to other contexts (such as savings). However, the study presents evidence that even in settings where there is no financial cost to participation, and when the incentives are advertised and promoted extensively and in a manner that would be difficult and costly to achieve in most real world settings, prize-linked incentive programs may face large selection problems.  Even if prize-linked incentives were to causally improve financial health for some consumers (a prospect for which I find little evidence), results from this study suggest that it may be very difficult to get these individuals to participate.