There is often controversy over whether public investment into scientific research is valuable. Despite this, back in 2004, California residents voted to pass the California Stem Cell Research and Cures Initiative. This authorized $3 billion in bond funding to establish the California Institute for Regenerative Medicine (CIRM), which funds stem cell research. CIRM is approaching its last fiscal year of dispersing funds. Thus we face an obvious question: should the public continue to invest in science or is it just too risky? 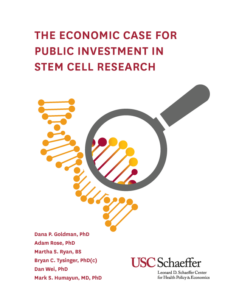 In a new white paper, Schaeffer Center researchers estimate the economic impact of this $3 billion bond measure. Their research suggests this investment into CIRM has produced a significant return for the state of California with improvements in life expectancy, employment, income, and tax revenues. Leveraging regional and national input-output models, the Schaeffer researchers approximated CIRM’s spending into 2023 will have generated 56,000 jobs and added approximately $10 billion to California’s economy.

In addition to the economic benefit, the greatest value of this investment lies in the future promise of ameliorating disease. While the benefits may not be immediate, consistent investment into biomedical research could produce long-term health improvements. The researchers used the Schaeffer Center’s Future Elderly Model, an economic demographic microsimulation, to assess and examine the impact of possible benefits of successful research on the state and nationwide level. They estimate a 10% reduction in incidence of breast cancer would generate $10 billion in social value. They also found the potential for similar social and economic returns for other cancers, as well as chronic diseases like diabetes.

It is important to recognize how the results of scientific discovery are important to society overall. New discoveries that improve health make the population healthier, happier, and more productive. While scientific research is risky and unpredictable, it is beneficial and important for the government to step in to rake on this risk and fund it for societal wellbeing. Simply put: given the progression of health R&D following initial investment, the government has an obligation to invest into scientific research.

We also must address a common misconception that public scientific funding competes and discourages private enterprise. Schaeffer experts found public biomedicine investment instead stimulates private R&D. A $1 investment in basic research generates $8.38 of U.S. industry R&D over the next eight years, and a $1 investment in clinical research stimulates $2.35 of private R&D over 3 years. Furthermore, there are often public-private partnerships and collaborations to tackle global disease. This demonstrates that public investment in biomedicine in fact pays off in all arenas.

Overall, California needs a new approach to fight disease and disability. As a state and nation, we underinvest in health. The Schaeffer Center research shows tremendous progress in health with continued public investment. The investment into CIRM affords a direct stimulus to the economy and major health improvements in California. With the $3 billion investment, CIRM has funded 60 clinical trials with a target of 3,500 patients and has made advances in research in kidney failure and amyotrophic lateral sclerosis (ALS).

With this type of research, the public sector plays an important role in its continued development, which stimulates private sector growth. As a state and a nation, we must recognize that continued investment into scientific innovation is more than necessary. Scientific discovery takes time but reaps long term benefits in the health and financial arenas. As of right now, society underinvests in this research when these investments in physical and institutional health infrastructure, research, training, education, clinical trials and more produce significant output in income, employment and tax revenues. From an economical and physical standpoint, the Schaeffer researcher’s discoveries indicate investment into scientific exploration should continue.