Annuities are an efficient way of funding post retirement consumption given substantial mortality risk at older ages. The private market for annuities in the US is quite narrow and older Americans hold no commercially available annuities. However, Social Security provides the largest source of annuity income at older ages. The benefits form more than half of the retirement wealth and are dependent on a worker’s earnings history and the age at which they choose to claim benefits. Under the Social Security rules, claiming benefits at the earliest age of eligibility is heavily penalized. Workers who claim early receive a smaller fraction of benefits every year than if they had delayed claims to the full retirement age. As a result, the SS benefit claiming decision provides a unique way of studying annuitization decisions. We find that close to half of all elderly claim benefits at the earliest age of eligibility thereby actively choosing a lower annuity. This choice, therefore, represents a retirement annuity puzzle. We shed some light on this puzzle by first documenting that early retirement claiming is highly concentrated among those who are not working, in poor health and without a college degree. Additionally, substantial fraction of the population lacks information about the claiming-age-dependent nature of the benefits. We build a lifecycle model of consumption, savings, retirement and social security claiming with heterogeneities in education, health, income and unemployment shocks as well as knowledge about Social Security rules to match these empirical observations. Simulations from the estimated model indicate that lack of knowledge about Social Security early claiming penalty can explain the peak in early SS claims. Moreover, heterogeneities in health, mortality and unemployment shocks can explain the differences in early claiming behavior observed across different education groups. 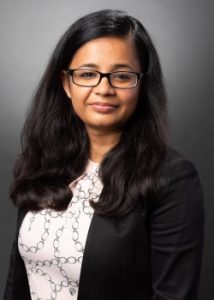 Dr. Bairoliya’s research interests lie in analyzing demographic transitions and in understanding the macroeconomic and welfare effects of public policy programs globally. She is particularly interested in examining health insurance and pension programs, and understanding their role in mitigating health and socio-economic inequalities. Her research combines rigorous economic theory, the knowledge of public and social institutions, rich micro data and large-scale simulations to answer important questions at the intersection of public policy, population health and aging.