Day 2: The Pandemic Has Put New Demands on Healthcare Systems, Payers and Policymakers to Provide and Pay for “Patient-Centric” Care. Is the U.S. Health System Ready to Equitably Meet These New Demands?

In response to changing patient preferences as a result of COVID-19, health systems and policymakers have had to rethink how to provide and pay for care that patients value. For example, telehealth has become an acceptable and widespread alternative approach to patient care, and payers have stepped up to reimburse the service. But some healthcare must be delivered in-person, and patients want reassurance that they will be safe from infectious diseases, even after the current crisis is over. What steps need to be taken by public and private decision-makers to equitably give patients what they want while also ensuring a health system able to meet the capacity demands of a future pandemic?

Join the Schaeffer Center for a two-part series on the pandemic’s effects on the kind of care patients are seeking, what they value and prefer, and the need for healthcare systems, payers, and policy makers to meet this challenge in an equitable way. Day two will focus on whether the U.S. health system — payers, policymakers, healthcare systems — are ready to equitably meet new demands to provide and pay for “patient-centric” care.

This is the second part of a two-part webinar. View Day 1 here. 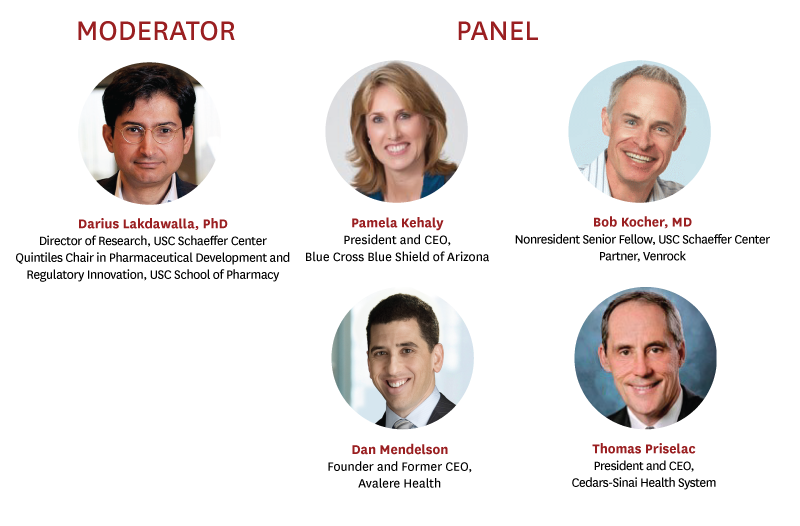 Darius Lakdawalla holds the Quintiles Chair in Pharmaceutical Development and Regulatory Innovation at USC, where he sits on the faculties of the USC Schaeffer Center, the USC School of Pharmacy and the USC Price School of Public Policy. He is a widely published, award-winning researcher, and a leading authority in both health economics and health policy.

Pam Kehaly is the president and CEO of Blue Cross Blue Shield of Arizona. Previously, she was president of Anthem’s West region (which includes California, Colorado, Indiana, Kentucky, Missouri, Ohio, Nevada and Wisconsin) and the Specialty business (which includes dental, vision, life, disability, workers’ compensation and voluntary business areas). Anthem is a Fortune 50 company and one of the nation’s leading health benefits companies. Kehaly previously served as president of the Anthem Blue Cross plan in California, and the Anthem Blue Cross and Blue Shield plans in Colorado and Nevada. Prior to that, she was president of national accounts at Aetna, where she was responsible for nine million members. Kehaly started her career with Blue Cross of California in 1986, where she worked in a variety of roles from operations to profit and loss management.

Kehaly received a bachelor’s in business administration from California State University, Stanislaus. She serves on the Board of Trustees of the Southern California and Nevada National Multiple Sclerosis Foundation, and is an active member of the Los Angeles division of the Susan G. Komen Foundation. Additionally, she served on Governor Brown’s “Let’s Get Healthy Task Force,” to develop a vision and framework to improve the health of all Californians.

She was the driving force behind Vivity, a first-in-the-nation joint venture between an insurer and seven hospital systems to align financial incentives behind better outcomes. She was also a leader in Patient Safety First (PSF), a collaborative between Anthem, the National Health Foundation and California’s regional hospital associations. In the first three years in existence, PSF’s work helped reduce early elective deliveries and hospital-acquired infections, leading to 3,576 fewer deaths and more than $63 million in otherwise unnecessary hospital costs. In recognition of the collaborative work, PSF won the 2013 John M. Eisenberg Patient Safety & Quality Award from the National Quality Forum and The Joint Commission.

Bob Kocher, MD, is a partner at Venrock and focuses on healthcare IT and services investments. He currently serves on the boards of Devoted Health, Virta Health, Aledade, Renew Health, Lyra Health, and Premera. He is a Board Observer at Grand Rounds, Stride, Doctor on Demand, and Suki.

Additionally, he is an adjunct professor at Stanford University School of Medicine and a nonresident senior fellow and advisory board member at the Leonard D. Schaeffer Center for Health Policy & Economics at USC. He also serves on the advisory board of the National Institute of Healthcare Management (NIHCM).

Prior to Venrock, Bob served in the Obama Administration as Special Assistant to the President for Healthcare and Economic Policy on the National Economic Council, as a partner at McKinsey & Company, and is an internal medicine doctor.

Dan Mendelson is Founder and former CEO of Avalere Health, a vibrant community of innovative thinkers dedicated to solving the challenges of the healthcare system.  He is also Operating Partner at Welsh Carson, a private equity firm focused on healthcare and technology investments.  Prior to founding Avalere in 2000, Dan served as Associate Director for Health at the Office of Management and Budget in the Clinton White House, where he was responsible for the full healthcare portfolio including Medicare, Medicaid, NIH, CDC, and FDA.

Dan presently serves on the boards of Champions Oncology (CSBR), Centrexion Corporation, Audacious Inquiry, and Partners in Primary Care.  He is Adjunct Professor at Georgetown University’s McDonough School of Business, and a founding member of Guidon Partners, an investment management group.  Dan also serves on the board of the Alliance for Health Policy.  He previously served on the boards of Coventry Healthcare (CVTY, sold to Aetna in 2013), PharMerica (PMC, sold to KKR in 2017) and HMS holdings (HMSY).

Dan is a leading national thought leader on healthcare business issues, is often quoted in the press and enjoys speaking.  He has also published widely in peer-reviewed and professional journals on health information technology, the costs of disease, hospital costs and operations, physician payment, the economics of managed care, and medical malpractice. He holds a BA from Oberlin College, and an MPP from the Kennedy School at Harvard University.

Holder of the Warschaw/Law Endowed Chair in Healthcare Leadership at Cedars-Sinai, Priselac also serves as an adjunct professor at the UCLA School of Public Health, and is an author and invited speaker on a variety of contemporary issues in healthcare.