As the country moves toward a new normal, how will American healthcare change? Join Dana Goldman in conversation with Jay Crosson, immediate past chair of MedPAC and infectious disease physician.

COVID-19 has turned the world upside down with people shuttered at home, kids out of school, and the economy tanking. As the country moves toward a new normal, how will American healthcare change? A discussion between Dana Goldman, director of the Schaeffer Center for Health Policy & Economics, and Jay Crosson, immediate past chair of the Congressional Medicare Payment Advisory Commission (MedPAC) and an infectious disease physician, will touch on the epidemiology of COVID-19 and what it means for America, cost consequences of the pandemic, and the impact of COVID-19 on the pharmaceutical industry.

The event has concluded. 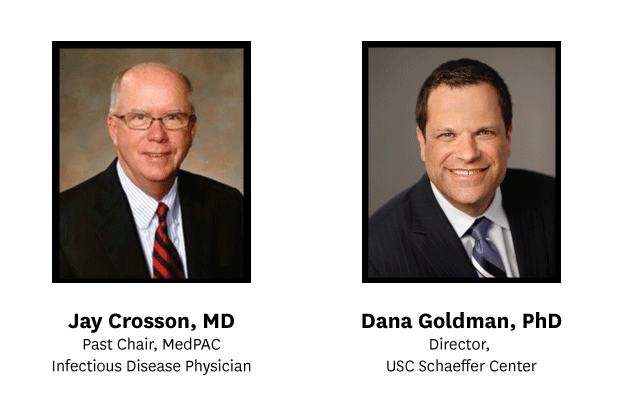 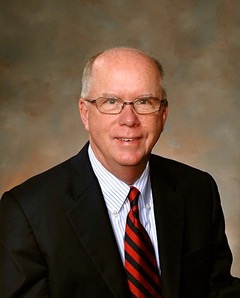 Dr. Jay Crosson is the immediate past Chairman of the Congressional Medicare Payment Advisory Commission (MedPAC). MedPAC advises Congress on ways to promote high quality coordinated care for beneficiaries and preserve the fiscal integrity of the Medicare program. He served on MedPAC for over ten years including as Chairman from 2015 to 2020.

Previously, Crosson was the founding Executive Director of The Permanente Federation, the national organization of the Permanente Medical Groups, the physician component of Kaiser Permanente. He also served as a Senior Fellow in the Kaiser Permanente Institute for Health Policy, where in 2010, he co-authored and edited the book entitled “Partners in Health: How Physicians and Hospitals Can Be Accountable Together.”

Crosson is Past Chair of the Governing Board of the American Medical Group Association (AMGA). In 2002, Crosson founded and for ten years led the Council of Accountable Physician Practices (CAPP), an AMGA affiliate, focused on delivery system reform. From 2012 to 2014 he was a Group Vice President of the American Medical Association, where he founded a department dedicated to improving physician practices. He also served on the National Advisory Committee of the Agency for Healthcare Research and Quality (AHRQ) from 2012-2015.

Crosson received an undergraduate degree in Political Science and, in 1970, a medical degree from Georgetown University. He completed a residency in Pediatrics at the New England Medical Center Hospitals and a fellowship in Infectious Diseases at the Johns Hopkins University Medical School. He is certified by the American Board of Pediatrics. He served as a physician in the U.S. Navy at the Bethesda National Naval Medical Center from 1973-75. He is a graduate of the Kaiser Permanente Executive Program at Stanford Business School. 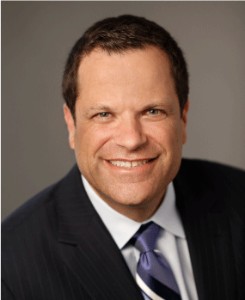 Goldman is the author of approximately 250 articles and book chapters in medicine, health policy, economics, and statistics.  He has served—or is serving—as a health policy advisor to the Congressional Budget Office, Covered California (the California insurance exchange), and the Fred Hutchinson Cancer Institute’s Outcomes Research External Advisory Board.  He is a founding editor of the Forum for Health Economics and Policy, and serves on several editorial boards including Health Affairs and the American Journal of Managed Care. He is a former director of the International Society for Pharmacoeconomics and Outcomes Research and the American Society of Health Economists. Goldman's work has been featured in The New York Times, The Wall Street Journal, Forbes, The Washington Post, Business Week, U.S. News and World Report, The Economist, NBC Nightly News, CNN, National Public Radio, and other media.

Goldman is also an Adjunct Professor of Health Services at UCLA and a research associate with the National Bureau of Economic Research. He was a co-founder of Precision Health Economics, a consultancy that provides services to health insurance, pharmaceutical, biological and health care technology companies, and he currently serves as a consultant to the firm.  He serves on a scientific advisory board to ACADIA Pharmaceuticals. Prior to arriving at USC, he spent 15 years at the RAND Corporation, where he held the Distinguished Chair in Health Economics and served as director of RAND's program in Health Economics, Finance, and Organization and the Bing Center for Health Economics.