In Texas v. U.S., Texas and a number of other states have sued the federal government, arguing that the entire ACA should be struck down. In December – despite opposition from even conservative legal scholars – a federal judge agreed with them, and in March, the Trump DOJ joined them in that position. The case was argued before the Fifth Circuit in July. Meanwhile, some of the states that had originally joined the lawsuit have since dropped out; California and a group of other states have intervened in the lawsuit arguing that the ACA should remain in place; and two states supported California’s position without joining in the lawsuit – leaving quite an array of state positions.

Moreover, a peculiar set of briefs on standing led DOJ to articulate the position that the ACA should be struck down in only the eighteen states that are currently plaintiffs in the lawsuit. If that position were to prevail in the Fifth Circuit, a state’s litigating position in Texas v. U.S. could have big effects on its citizens, at least in theory.

So, where does your state stand in Texas v. U.S.? 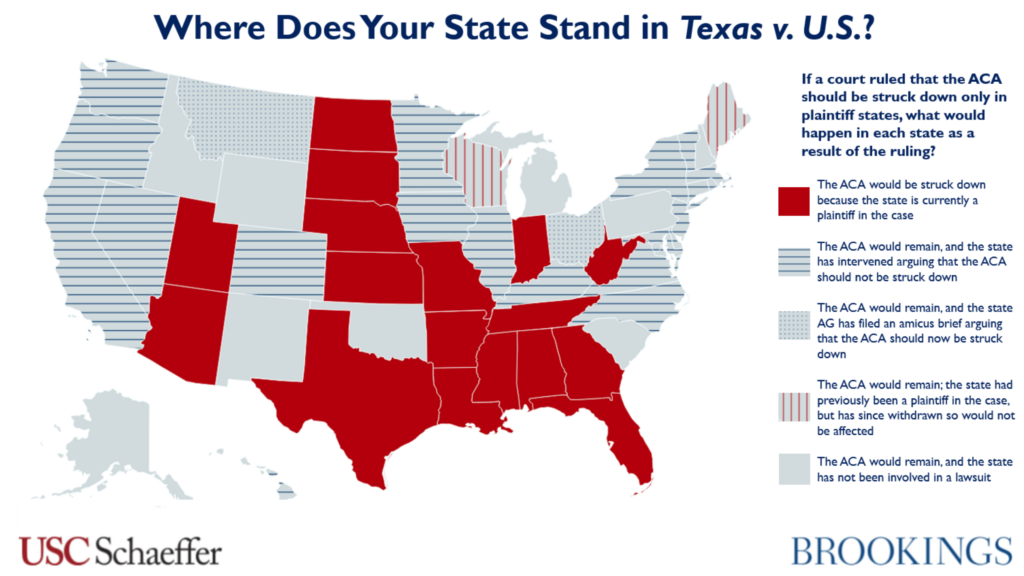 States where the ACA would remain, and the state AG has filed an amicus brief arguing that the ACA should not be struck down: Montana, Ohio.

States where the ACA would remain; the state had previously been a plaintiff in the case, but has since withdrawn so would not be affected: Maine, Wisconsin.

States where the ACA would remain, and the state has not been involved in the lawsuit: Alaska, Idaho, Maryland, New Hampshire, New Mexico, Oklahoma, Pennsylvania, Wyoming.