Researchers from USC and Columbia University have developed a new index that measures how well countries are adapting to dramatic increases in the aging population. 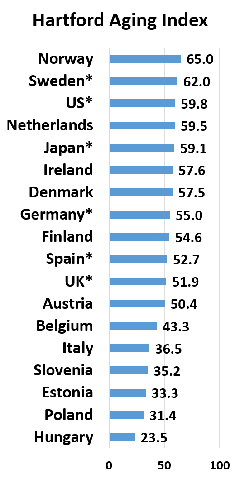 The John A. Hartford Foundation Index of Societal Aging was developed by researchers at the USC Leonard D. Schaeffer Center for Health Policy & Economics and the Columbia University Mailman School of Public Health. The index is based on five economic and social indicators that reflect the status and wellbeing of aging residents in 30 countries, from the United States to western Europe.

Researchers leading the collaboration unveiled the new index on Wednesday at the International Association of Gerontology and Geriatrics’ World Congress in San Francisco.

“The index provides an accurate look at how well societies are adapting to this aging challenge,” said Dana Goldman, Distinguished Professor and Leonard D. Schaeffer Director’s Chair at the USC Schaeffer Center. “Utilizing reliable and sensitive economic and social indicators that are widely available, the tool allows countries to take a broader view of both current conditions and likely future demographic realities.” 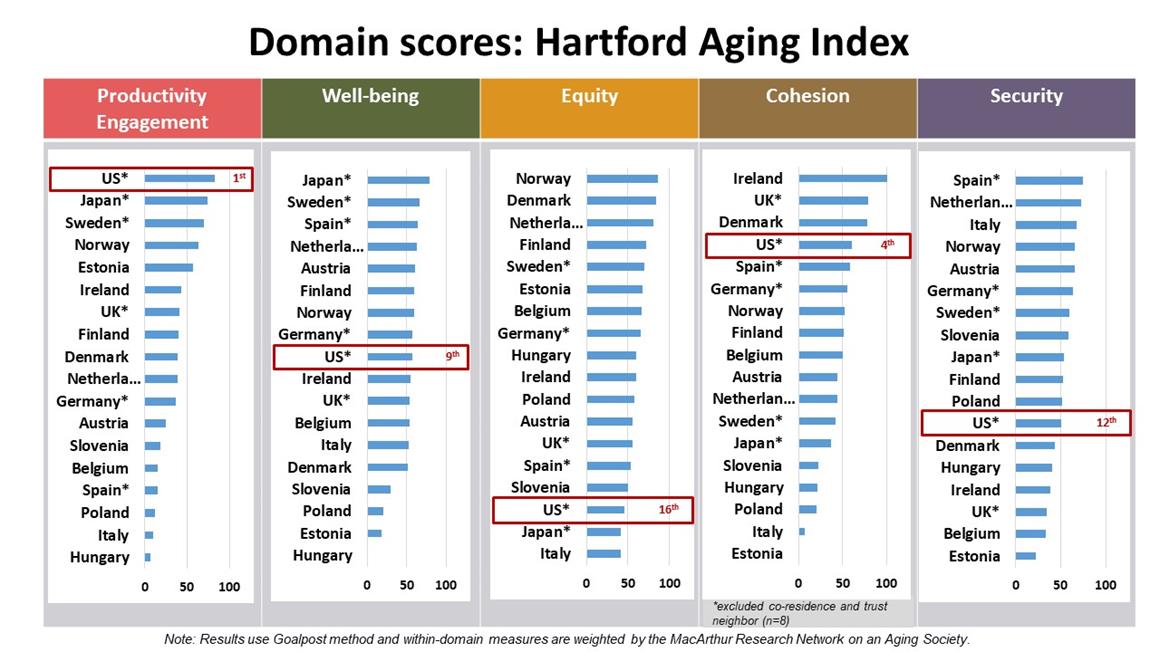 The Hartford Aging Index is comprised of five indicators that provide new context for measuring the health of aging populations, including an evidence-based metric to assess effectiveness over time and in many countries, the researchers said. Prior indices either made comparisons for a select group of industrialized nations only – at times excluding the United States – and they were heavily weighted on economic metrics, such as working late in life.

“Now that previously unimagined numbers of older persons are living longer, it is critical that we shift from our prior sole focus on the characteristics of individuals and their immediate environments to one that includes a strategy for the entire society to successfully adapt to an aging population,” said John Rowe, MD, Julius B. Richmond Professor of Health Policy and Aging, Health Policy and Management at the Mailman School of Public Health who led the interdisciplinary team of researchers.

A sample analysis of the data shows that the five countries in the index coping best with their aging populations are: Norway, Sweden, the United States, the Netherlands and Japan.  (See charts)

The rankings in the overall multidimensional index, weighted across all five domains, show that there is room for improvement, even among these top-ranked countries. The U.S. overall score for achieving healthy aging, 59.8 percent, signifies that the country is more than halfway toward the goal, while Norway, at 65 percent, is even further ahead.

“Interestingly, the index demonstrates that the United States – despite general problems with inequity and social cohesion – has done well in keeping older Americans financially secure, productive, and engaged,” Goldman said.

The researchers said prior similar tools have provided an incomplete picture of aging as they failed to capture inequalities within advanced and developed aging societies. In some cases, they did not account for other key indicators of an aging society.

Rowe, Goldman and USC Schaeffer Center fellow Cynthia Chen presented details of The Hartford Aging Index at the conference. The five indicators are:

“Failure to adapt to aging is a risky strategy for a country,” Rowe said. “If we neglect to develop and implement effective policies we will be left with a society rife with intergenerational tensions, characterized by enormous gaps between the haves and the have-nots, and unable to provide needed goods and services for any of its members—especially a progressively older and more dependent population. The good news is this gloomy scenario is avoidable.”

The Hartford Aging Index is now available online at agingsocietynetwork.org.

Experts with the MacArthur Research Network on an Aging Society served as project advisors: Toni Antonucci and James Jackson at the University of Michigan; Lisa Berkman at the Harvard Center for Population and Development Studies;  Axel Böersch-Supan at the Munich Center for the Economics of Aging; Frank Furstenberg at the University of Pennsylvania; Martin Kohli at the European University Institute; S. Jay Olshansky at the University of Illinois; John Rother of AARP; and Julie Zissimopoulos at the USC Schaeffer Center.