A new study found New York counties that implemented restrictions on trans fats experienced a 6.2 percent decline in hospital admissions for heart attack and stroke compared to counties without restrictions in place. The study provides further evidence of the effects public policy changes can have on population health.

USC Schaeffer Center and School of Pharmacy Assistant Professor Rebecca Myerson co-authored the study, which was published in JAMA Cardiology. The lead author of the study is Eric Brandt, MD of Yale University School of Medicine, who is a cardiologist who was drawn to the topic due to prior clinical data showing their deleterious effects of trans fats on health.

“This study helps to shore up the case for trans fat restrictions as good public policy,” said Myerson. “This is an example of the positive benefits public health policies can have on population health.”

Trans-fatty acids, or trans fats, are most often found in processed foods like cookies, crackers, frozen pizzas, and fried foods when food manufactures use partially hydrogenated oils for stabilizers. Recent studies have found even small amounts of trans fats are associated with an increase in cardiovascular events. To curb exposure, New York City enacted a ban on trans fats in eateries starting July 1, 2007. Similar restrictions were implemented in six additional counties across the state in the following years.

The researchers evaluated what effect these bans had on trends in cardiovascular events by analyzing data from hospitalization records over 2002 to 2013. Myerson’s role in the study included designing the analysis in collaboration with other authors, and conducting the analysis. The authors faced the challenge of constructing an appropriate comparison group since the location and timing of the trans fat restrictions was not randomized. “Ultimately, we constructed a comparison population for the 11 restriction counties by using data from 25 other highly urban counties within the state. We analyzed these data using a difference-in-difference regression design” Myerson said. “The data show good properties such as parallel pre-trends, but we also took a conservative approach by controlling for differences across counties and pre-existing trends. We also address possible spillovers due to commuting across counties.”

Stroke and heart attack rates were already declining across the state prior to the first ban. Yet, the researchers found a more significant additional decline in admissions for stroke and heart attack three or more years after trans fat bans were implemented, based on trends in similarly urban areas without the restrictions. The decline for combined conditions was 6.2 percent which equates to 43 events averted per 100,000. 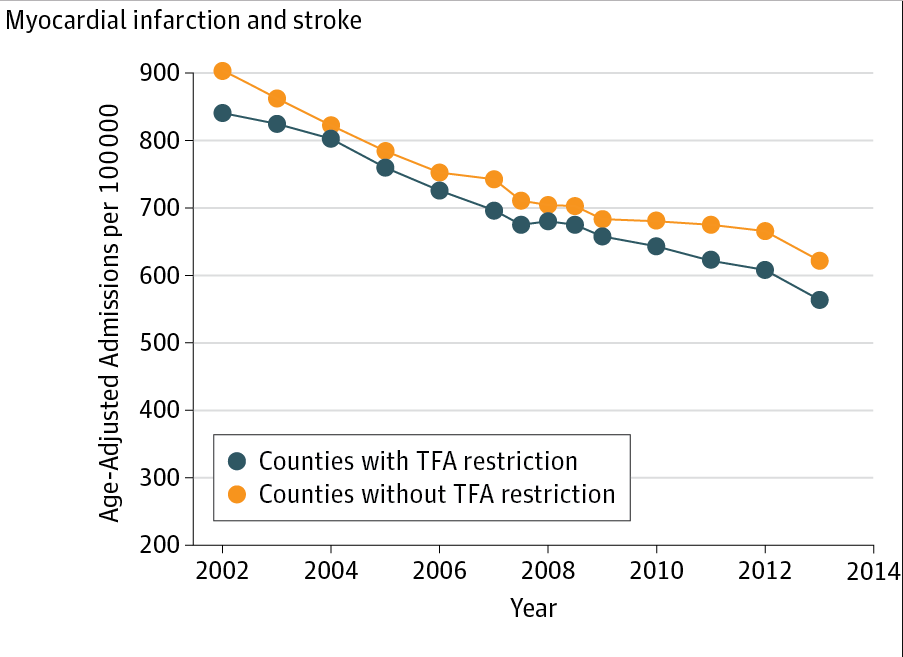 This study comes at a pivotal time considering trans fat restrictions are set to expand nationwide in the next year. The Food and Drug Administration (FDA) released a ruling in 2015 stating trans fats are no longer safe to consume in processed foods and effective in 2018, prohibits use of partially hydrogenated oils (the primary source of artificial trans-fat) in all foods.

“Even though some companies have reduced the amount of trans fat in food, current FDA labeling guidelines allow up to 0.49 grams of trans fat per serving to be labeled as 0 grams,” Brandt notes. This leaves consumers to leaving consumers to “scour labels for hidden trans fats, usually labeled as partially hydrogenated oils. With the upcoming FDA regulation, people need not be so vigilant. A nationwide trans fat ban is a win for the millions of people at risk for cardiovascular disease,” Brandt said.

This research was supported by the American Medical Association Seed Grant Research Program and the National Center for Advancing Translational Sciences of the National Institutes of Health.