Despite bipartisan attempts to address the problem, many Americans remain at risk of surprise medical bills from healthcare providers outside their insurance network—even when the facility where they received treatment was in-network. While previous studies have documented these massive, unexpected medical bills in emergency and inpatient settings, new research authored by Schaeffer Center experts is the first to apply data to examine their prevalence in ambulatory surgery centers (ASCs).

ASCs, which offer same-day surgical care and diagnostic procedures, have risen in popularity due to perceived lower costs than traditional hospitals for such services as colonoscopies and other gastrointestinal procedures, cataract surgeries and orthopedic procedures. However, in a study published in the May 2020 issue of Health Affairs, Schaeffer Center Post-Doctoral Fellow Erin Duffy and colleagues found that ASCs offer no safe haven from surprise billing.

Working with Erin Trish, Loren Adler and Paul B. Ginsburg, Duffy analyzed 4.2 million ASC-based episodes of care from across the U.S. between 2014 and 2017. Relying on commercial claims data from three of the nation’s largest insurers, the team found that surprise bills from ASCs occurred just as often as from hospitals and most of the bills involved out-of-network ancillary providers whom patients do not choose and cannot avoid. The researchers estimate one-in-twelve episodes in their data set potentially resulted in a surprise bill.

“ASCs are an important and often overlooked part of the surprise billing discussion,” Duffy said. “These surgery centers are increasingly used and patients assume if the center is in-network their care will be. What our research shows is that is often not the case.”

The researchers found that the magnitude of potential surprise bills from clinicians practicing in ASCs rose by 81 percent during the years analyzed, averaging $1,483 in 2017. 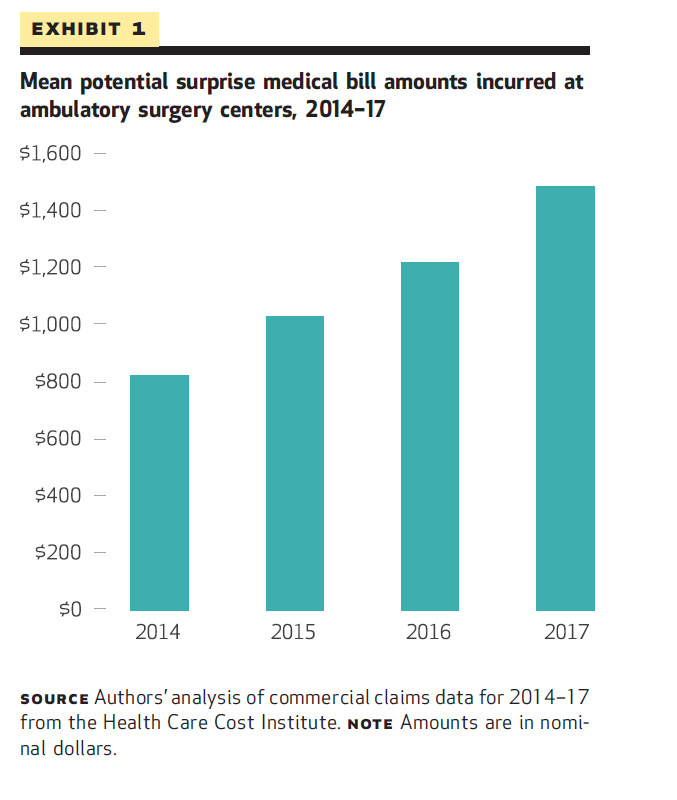 Duffy and her colleagues estimate that over all bills analyzed, 10 percent had the potential to result in a surprise bill because of an out-of-network provider. However, in nearly a quarter of these instances, the insurer paid the full bill charged, a finding that has potential ramifications for premiums and overall healthcare spending.

“While these patients are protected from receiving an unexpected bill, it means that enrollees in these plans pay higher premiums,” explained Trish, who is Associate Director of the USC Schaeffer Center and Assistant Professor at the USC School of Pharmacy. Trish noted that this is the first time this aspect of the surprise billing issue has been systematically analyzed in commercial claims.

The study’s findings are especially resonant during the COVID-19 pandemic, as the findings suggest the laboratories charged with analyzing tests for the virus have the potential to surprise bill. Though the Congressional CARES Act mandates that insurers cover the listed costs of COVID-19 tests performed by out-of-network providers, no limits have been placed on how high those prices can be set. Therefore, as in all cases where insurers pay the balance owed, the ultimate burden may fall on policyholders through increased premiums.

The authors conclude that federal action should be taken to help protect patients from these large, unanticipated costs.