Editor’s Note:  This analysis is part of The Leonard D. Schaeffer Initiative for Innovation in Health Policy, which is a partnership between Economic Studies at Brookings and the USC Schaeffer Center for Health Policy & Economics. The Initiative aims to inform the national health care debate with rigorous, evidence-based analysis leading to practical recommendations using the collaborative strengths of USC and Brookings.

The Affordable Care Act’s excise tax on employer-sponsored plans, commonly referred to as the “Cadillac tax,” imposes a 40 percent excise tax on employer-provided health benefits with a cost in excess of specified thresholds. Although legislation enacted earlier this month delayed the tax until 2022, it had previously been scheduled to affect plans with costs higher than around $11,000 for single coverage and around $29,000 for other coverage starting in 2020.

The vast majority of employer-provided plans cost less than these thresholds. The Treasury Department has estimated that just 4 percent of plan enrollees and 1 percent of plan costs would be above those thresholds in 2020 (in a world without the Cadillac tax). These fractions will rise gradually over time because the thresholds rise with the Consumer Price Index in the long run, which is likely to rise more slowly than plans’ spending on health care services, but the tax is likely to apply to a relatively small minority of plans and plan costs for the foreseeable future. 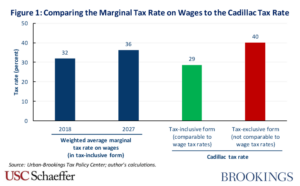 By contrast, marginal tax rates on wages and salaries are conventionally quoted as “tax-inclusive” rates, rates that apply to a tax base that includes amounts paid in tax. In the context of tax rates on wages and salaries, this means that the tax rate reflects the ratio of the amount paid in tax to the total amount the employer pays out in wages, including the portion of those wages that will be collected in tax.

Thus, when assessing the extent to which the Cadillac tax removes the open-ended subsidy for health benefits relative to wages and salaries, it is imperative to put the two taxes on equal footing. To see this more concretely, consider an employer deciding whether to devote an additional dollar of compensation to wages or to health benefits, and suppose that the cost of the employer’s health plan exceeds the Cadillac tax threshold and that its workers face a (tax-inclusive) marginal tax rate on wages of 32 percent. For the present purposes, the question of interest is how the fraction of that compensation dollar that is collected in taxes depends on the employer’s decision.

It is important to note that most of the discussion in this piece focuses on how the Cadillac tax changes the marginal tax rate on health benefits above the Cadillac tax threshold. This is the relevant tax rate for determining the extent to which the Cadillac tax removes the open-ended subsidy for more generous health benefits and, correspondingly, how likely employer are to change their compensation packages in response to the tax. However, this marginal tax rate is not always the relevant tax rate for determining how much revenue the tax will raise (and from whom). Many analysts, including the Congressional Budget Office, expect many employers subject to the tax to respond by reducing plan costs to the Cadillac tax threshold and increasing wages to compensate. In those cases, it is the tax rate on wages, not the Cadillac tax rate, that will determine the amount of revenue collected.

[1] This piece focuses solely on the federal tax system. For many purposes, however, it is also relevant to consider state taxes. Accounting for state taxes would modestly increase these average marginal tax rates.

[4] Another way of stating this question is to ask how much tax is paid per dollar the worker receives as after-tax wages or health benefits. In this case, the answer for each type of compensation would reflect the tax-exclusive versions of the two tax rates.