Editor’s Note: This analysis is part of USC-Brookings Schaeffer Initiative on Health Policy, which is a partnership between Economic Studies at Brookings and the University of Southern California Schaeffer Center for Health Policy & Economics. The Initiative aims to inform the national health care debate with rigorous, evidence-based analysis leading to practical recommendations using the collaborative strengths of USC and Brookings.

On July 12, we examined how the Better Care Reconciliation Act of 2017 (BCRA) discussion draft would affect people’s total spending on covered health care services, with the goal of providing a full picture of health care costs for consumers purchasing coverage in the individual market under the BCRA as opposed to current law. The analysis that follows updates this examination for the revised legislation made public on July 20 (“BCRA 2.0”).

There are two primary differences between the two versions of the BCRA that impact this analysis:

To construct estimates of the total health care costs (premiums plus out-of-pocket cost-sharing) that an individual market enrollee at different ages and incomes could expect to pay in 2026, on average, under the BCRA and under current law, we rely upon CBO’s estimates of the BCRA. We focus on the year 2026 because CBO provides estimates in that year for individual market insurance premiums at different ages, under both the BCRA and current law. CBO highlights 2026 because it is the last year in the 10-year budget window within which they provide estimates and because it illustrates that law’s effects when fully in effect.

The following policy changes have the largest effects on enrollees’ total costs: 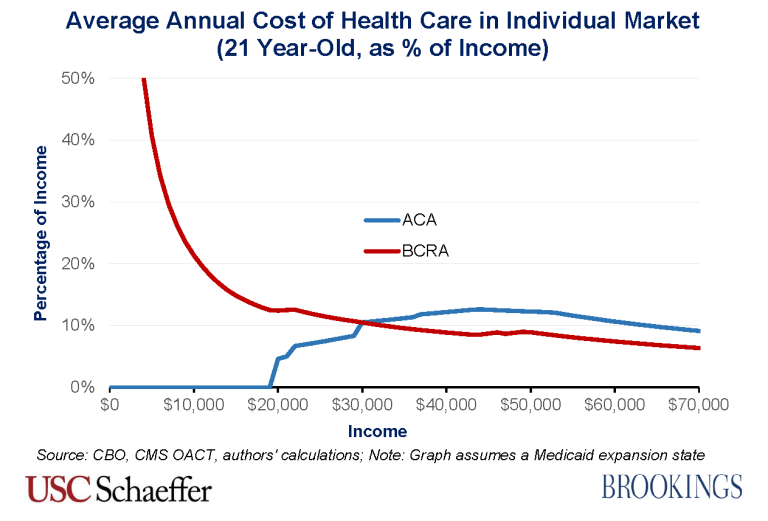 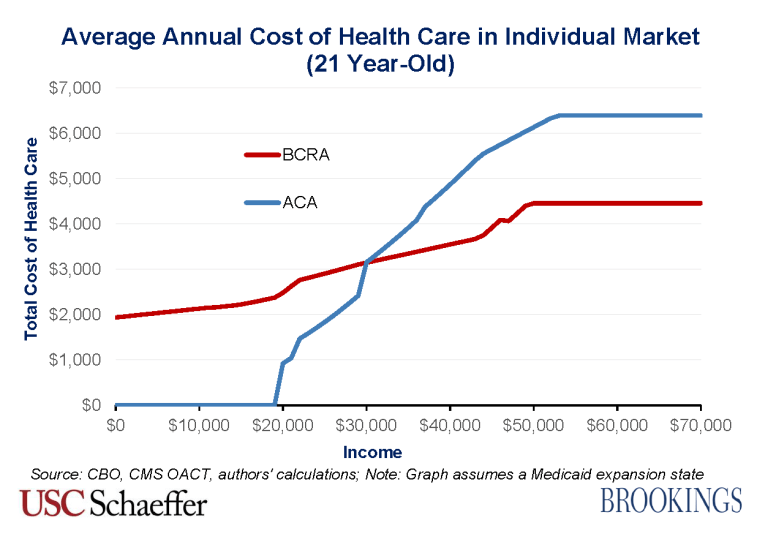 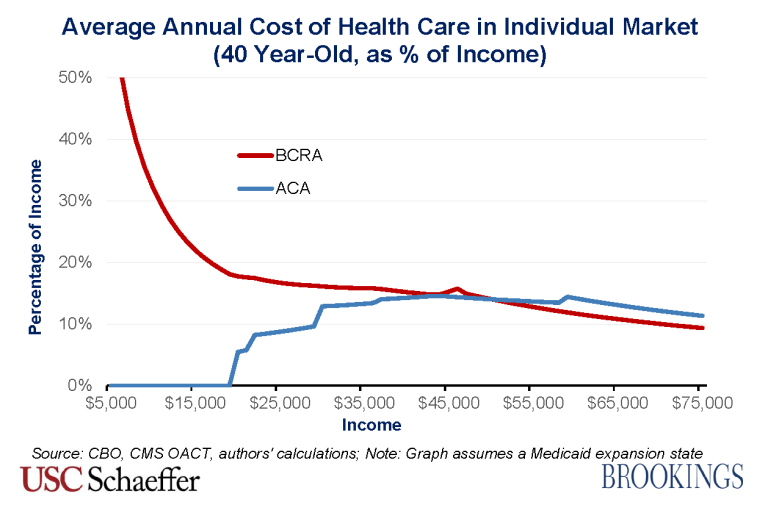 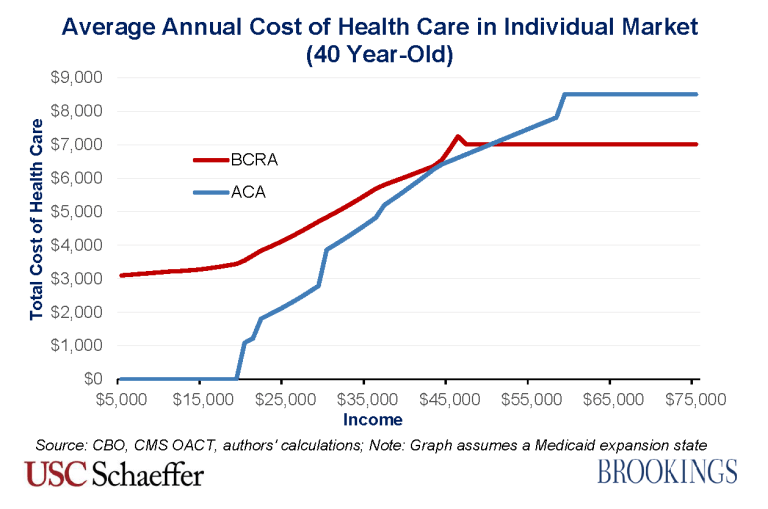 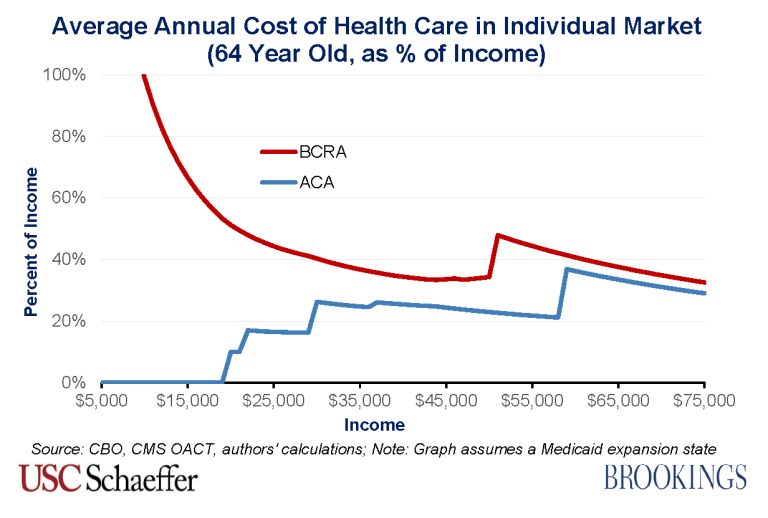 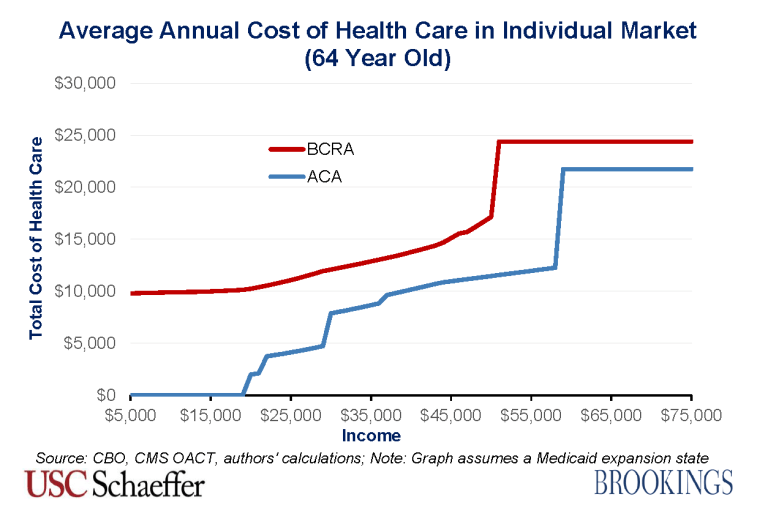 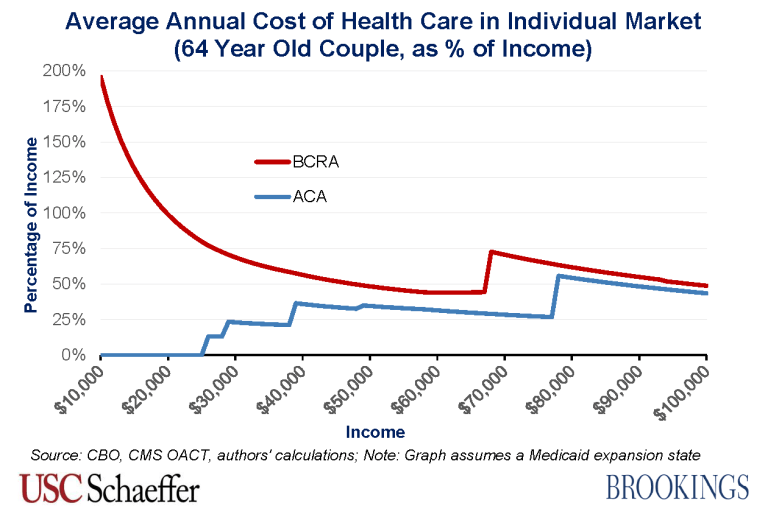 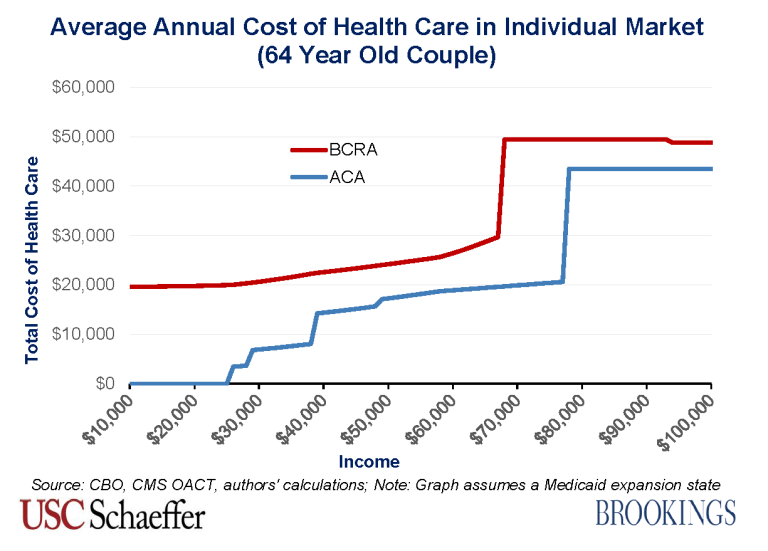 The most striking finding is that the BCRA would lead to a large increase in average annual health care costs for those with lower incomes, whatever their age and family type. The adverse impacts would be particularly pronounced for older enrollees with lower incomes. For example, a 64-year-old couple earning a combined income of $28,000 would go from average annual costs equal to 13 percent of their income under the ACA up to 70 percent of their income under the BCRA. The magnitude of this change stems in large part from the elimination of the ACA’s cost-sharing subsidies, which effectively reduce low-income enrollees’ out-of-pocket costs, and that unsubsidized average out-of-pocket costs are particularly high for a 64 year old couple.

The other major difference in average total costs occurs for older enrollees between 350 percent and 400 percent of the FPL, in which range the ACA offers sizeable premium tax credits but the BCRA does not provide any assistance.

For individual market enrollees younger than their mid-40s with high enough incomes, average annual total health care costs would be lower under the BCRA. However, the reduction in costs for such enrollees is generally much smaller than the increase in costs due to the BCRA for low income and older enrollees.

To calculate the net premium paid by an enrollee for a benchmark plan, we take the lower of the gross premium in 2026 estimated by CBO or the relevant percentage of their income specified by the premium tax credit schedules under the BCRA and ACA. In order to estimate the premium tax credit schedules in 2026, we adjust the affordability thresholds specified in the legislative language of both bills for 2014 by the extent to which employer insurance plan premium growth – as estimated by the Office of the Chief Actuary (OACT) at the Centers for Medicare and Medicaid Studies (CMS) – is projected to exceed personal income growth over that time period – as estimated by CBO. To estimate the federal poverty line in 2025 (which is used for 2026 subsidy calculations), we trend forward the levels in 2017 by CBO’s projections of Consumer Price Inflation for all Urban Consumers (CPI-U).

Additionally, for the BCRA, we assume that 75 percent of individual market enrollees at each income level take advantage of HSAs to pay their premiums to fullest extent allowed by law (the lower of their plan’s net premium or the projected HSA maximum contribution in 2026). For simplicity, this analysis assumes that their effective subsidy from the HSA provision is their marginal tax rate multiplied by their contribution allocated toward paying premiums. It is possible that this approach overstates the impact of the HSA provision because CBO does not make clear whether they assume the 75 percent of enrollees take advantage of this tax subsidy to the fullest extent possible, as we assume.

Therefore, under the BCRA, we multiply 80 percent of the gross benchmark plan premium by ((1/(1-.074)) to account for the higher claims costs not reflected in the premium, and then by (4.2/5.8) to account for the plan’s 58 percent actuarial value.  This approach implicitly assumes that the 5 to 1 premium variation between a 21 year old and 64 year old permitted under the BCRA accurately reflects the differences in claims costs by age.

Since premiums are constrained to vary by less than claims costs under current law, this approach would understate claims spending under the ACA—and thus out-of-pocket spending—for older adults and overstate that spending for younger adults. We thus proceed in two steps:

With these age-specific claims costs in hand, we calculate average out-of-pocket costs associated with a benchmark plan under current law (before incorporating the effects of the ACA’s cost-sharing reduction subsidies) by multiplying those amounts by 3/7, reflecting the ratio of out-of-pocket costs to plan spending under the benchmark plan. For enrollees with incomes at or below 250 percent of the FPL, who receive federal subsidies to assist with cost-sharing, we use a lower ratio to reflect the fact that a portion of out-of-pocket spending is covered by cost-sharing reductions.