Rising rates of sickness and death among middle-aged American whites without a college degree who are lacking a robust labor market create a strong argument for a single payer health plan in the U.S, said USC Presidential Professor Sir Angus Deaton in a presentation at USC’s Town and Gown.

The presentation—Morbidity and Mortality in 21st Century America—built on groundbreaking research by Deaton and Professor Anne Case in 2015 which showed a surprising increase in mortality rates for white non-Hispanic adults. The authors blamed drugs, suicide and alcohol for rising “deaths of despair” in the U.S.

By comparison, mortality is decreasing for people with lower levels of education in Europe, where universal healthcare anchors deep and wide social safety nets.

In the U.S. “dysfunction in health insurance spills into the labor markets” where participation by individuals without a college degree is falling, said Deaton. In addition, a single payer plan might save the nation $1 trillion annually, he said.

Deaton was recently named a Presidential Professor of Economics at the USC Dornsife College of Letters, Arts and Sciences. He is a Senior Scholar and Dwight D. Eisenhower Professor of Economics and International Affairs Emeritus at the Woodrow Wilson School of Public and International Affairs at Princeton University. In 2015 he won the Nobel Memorial Prize in Economic Sciences for his analysis of consumption, poverty and welfare. 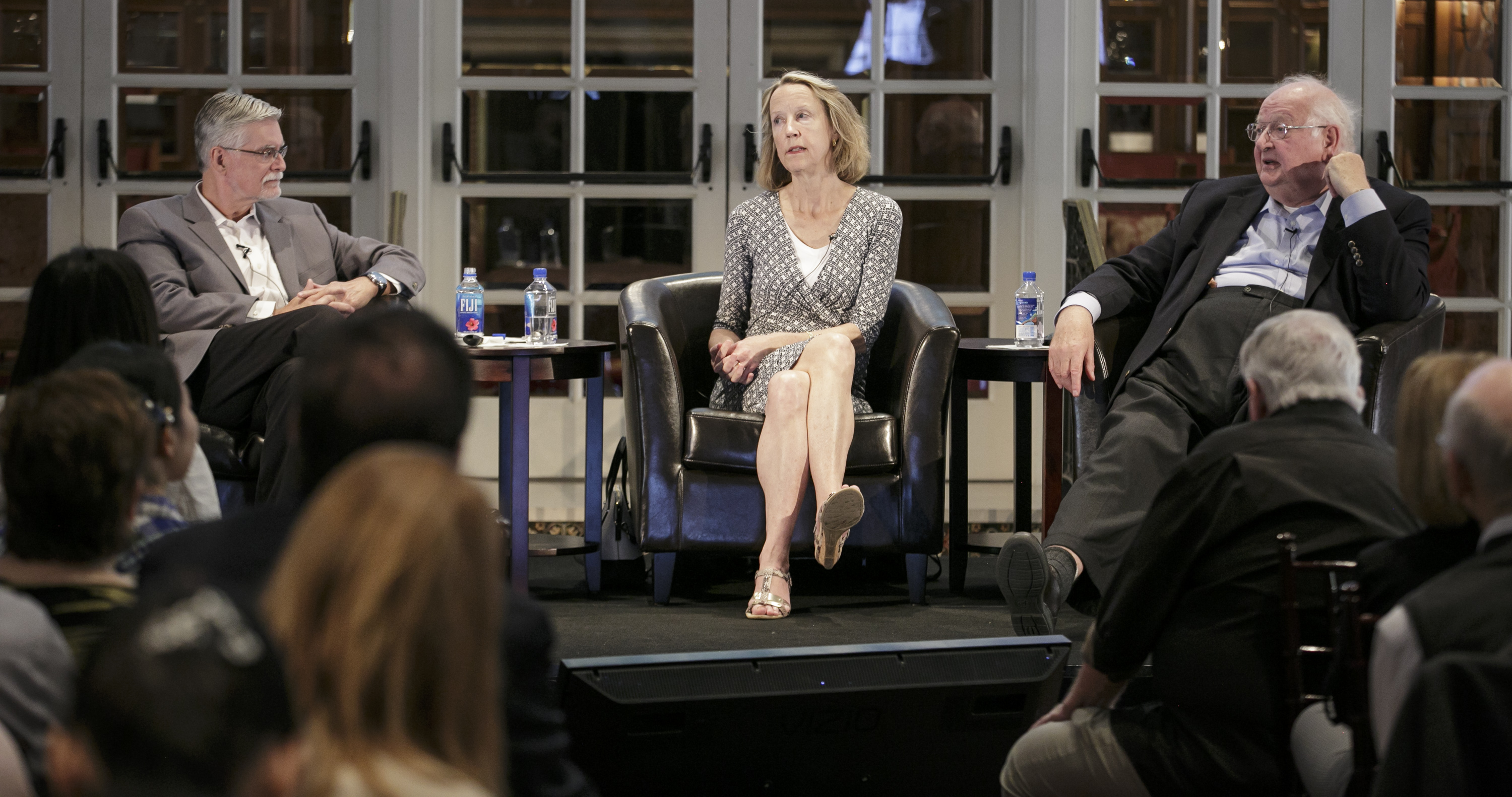 Case, who also spoke at Town and Gown, is the Alexander Stewart 1886 Professor of Economics and Public Affairs at Princeton University where she is the Director of the Research Program in Development Studies.

The findings were so startling that the researchers initially thought “we were going to make idiots of ourselves,” said Case. But the evidence was clear that middle class white Americans were dying in middle age at faster rates than minority groups.

While stagnant or declining incomes are a signature of the white middle class, that is not a complete explanation, she said. Income profiles for blacks and Hispanics, whose mortality rates have fallen, are no better than those for whites.

Case referenced a Doonesbury cartoon in which a white character laments that economic and social distress is driving up the death rate for whites but not blacks or Latinos. A black character responds that it isn’t odd because “we’ve always lived distressed lives, we’re used to it.”

“That may be the best summary of our study,” Deaton added.

Unlike their forebears, it is likely that middle class whites are now facing lives of “cumulative deprivation,” he said, characterized by steady deterioration in job opportunities, beginning with those leaving high school in the early 1970s. Income uncertainty leads to cohabitation instead of marriage, and rising numbers of births out of wedlock. Meanwhile support from traditional churches is giving way to new churches emphasizing “seeking.”

“The longer one lives in this environment, the worse outcomes become,” he said.

Some symptoms of the distress include chronic sciatic and joint pain, mental problems, social isolation, obesity, and heavy drinking.

This was underway before prescription opioids flooded the market, but their presence acted as an accelerant, Case said.

The epidemic of resulting deaths can be seen everywhere, she said. Suicide rates and drug or alcohol poising rose for white non-Hispanics aged 25-64 from 1999-2015 in every state. Similarly, alcohol-related liver mortality rose everywhere except New Jersey and Maryland, where death rates were flat.

The next generation of retirees are likely to be in worse physical and mental health than current retirees, and those that follow in worse health still, Deaton said.

Policies that successfully improve earnings and jobs, or redistribute income, will take many years to reverse the mortality and morbidity increase, Deaton said. But recognition that the white working class is collapsing should prompt change, including preventing the over prescription of opioids and consideration of universal healthcare.

He ended on an optimistic note, quoting De Tocqueville: the United States moves from the impossible to the inevitable without ever stopping at the probable.